Student excellence was recognized at the Academic Achievement Awards ceremony on Thursday, April 21, at Mechanics Hall in Worcester. Academic major awards were given for students with the highest grades from every Worcester State University department, while dozens of named awards, many backed by scholarship donors, were presented to about 60 high-achieving students at the annual event. 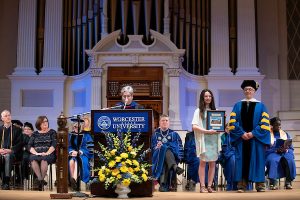 On the stage at Mechanics Hall

“No other ceremony speaks to the quality of Worcester State University’s learning experience as this one does,” President Barry M. Maloney said. “It showcases our students’ achievements, and also highlights the role that faculty and donors play.”

The Ella M. Whitney award, given for participation in school activities and scholarship as well as social aptitude, personality, loyalty, and other leadership qualities, was awarded to Esther Konadu, a senior psychology major with a concentration in mental health services. 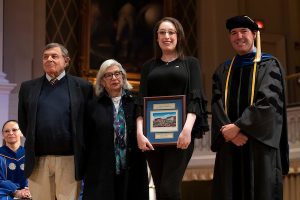 The John F. Eager Continuing Education Excellence Award, given to the undergraduate evening program senior with the highest grade point average, went to Elijah Bouthiller, and the Robert H. Kyle Award for Excellence in Liberal Studies went to Calli Korbey.

The George I. Alden Excellence in Teaching Award acknowledges Worcester State University professors who have made a difference in students’ lives through their teaching excellence. Each year, students, alumni, and faculty nominate full-time faculty members who have demonstrated excellence in teaching. This year’s award winners are Erika Briesacher Ph.D., associate professor of history and political science, and Hardeep Sidhu Ph.D., assistant professor of English.

Last year, the Foundation provided nearly $1 million in academic awards and scholarships and research grants to hundreds of students, Ann DeBiasio ’79, chair of the Worcester State Foundation Board, said. “On behalf of my colleagues at the Foundation, I’d like to offer my heartfelt congratulations to all of this evening’s award recipients,” she said.