Two weeks after 9/11, Stephen Kuusisto got into a cab in Columbus, Oh., with his guide dog and quickly got the impression that the silent driver didn’t like having a guide dog in his car. Then Kuusisto asked himself, “What if this situation has nothing to do with you?” and tried to connect with the driver. He discovered that the driver, who was from Pakistan and had experienced two weeks of abuse from passengers following 9/11, wasn’t unfriendly, just on his guard. 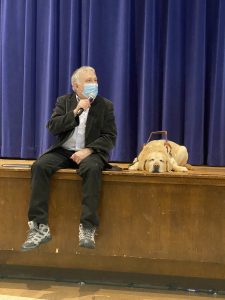 Responding to Kuusisto’s friendliness, the driver opened up, telling him he had come to the United States because his daughter was disabled, and he wanted her to have better opportunities. Kuusisto, blind since birth, was able to share his perspective on accessibility. The two men had a heartfelt conversation for the rest of the drive.

The topic of connection had been on his mind recently because of the war in Ukraine, which he called “devastating to the spirit.”

He shared a “terribly poignant and perfect” poem by Italian Surrealist poet Salvatore Quasimodo that reminded him how precious life and freedom are and how essential connection is: “Each of us is alone at the center of the earth, / pierced by a ray of sunlight. / And suddenly it’s evening.”

It was a motif he returned to throughout his talk.

“When I see people who are wildly angry in political spheres, I think to myself, ‘These are people who are fundamentally, terribly lonely,’” he said. “If I spend too much time alone, pretty soon, I start saying, ‘How come I don’t have more? How come people don’t like me? How come my life isn’t better?’ This is the language of being too separate, too removed from other people.”

Humility is one way to combat loneliness and encourage connection, he said. Curiosity is another. “You have to talk to people. you have to even expose a little of yourself.” Curiosity “brings us inherently closer together, and it makes us stronger.”

Kuusisto said he has an advantage in having a guide dog, which encourages people to open up. His 2013 book Letters to Borges was inspired by the great Argentine writer, who didn’t have orientation and mobility training when he lost his sight at 55 and couldn’t go places on his own, and couldn’t get “creatively lost,” which makes it difficult to make spontaneous connections with strangers.

Curiosity and discovery were main themes in the poem “Letter to Borges from Galway” from that book, in which a blind man goes for a walk “alone in a new city.” Kuusisto read, “I go out in the early morning rain / and tap the cobblestone with my stick. / On my left, there is a river. / On my right, a loose window / makes funereal percussions. / ‘Songs of Earth,’ I think. // I am not unique. / I stand beneath the shutter and weep. / I love this world.”

Kuusisto also read some of the poems he wrote at the start of the Gulf War. “My country’s exports are tears and dust,” the American narrator of “Prose Poem Written at 2 a.m.” says. From another poem, in which a dishwasher acts as an extended metaphor, “The War Production Canzone,” Kuusisto read, “I set the dial / to advanced patriotism … and / let the falling / inertia / of the unreal dead / wash backwards / into history …. My dishwasher / makes a sound / like wings / and washes out / all the blood-drenched / civilized / abstractions / of the rascals / who live / by killing / you and me.”

At the end of the poetry reading, Kuusisto sat down on the stage in the May Street Auditorium, mic in hand and his Labrador guide dog, Caitlyn, resting at his side. For nearly half an hour he fielded questions from students about poetry, his writing process, and the challenges disabled people face because of discrimination and lack of accessibility. He returned over and over to the idea of connection.