What would Picasso and Albert Einstein be wearing if they had a chance meeting in a Parisian café in 1904?

Bellalorraine Carey-Hicks, who graduated in December with a double major in English and theatre, had to come up with an answer for that question as the costume designer for the play Picasso at the Lapin Agile, which was produced by the Visual and Performing Arts Department [1] last fall. In a recent interview, she said her goal was to accurately portray the historical era in a way that also resonated with modern audiences.

She worked on the costume project, which was her senior capstone project, under the guidance of VPA Chair Sam O’Connell through the Student Undergraduate Research Grant (SURG) program. 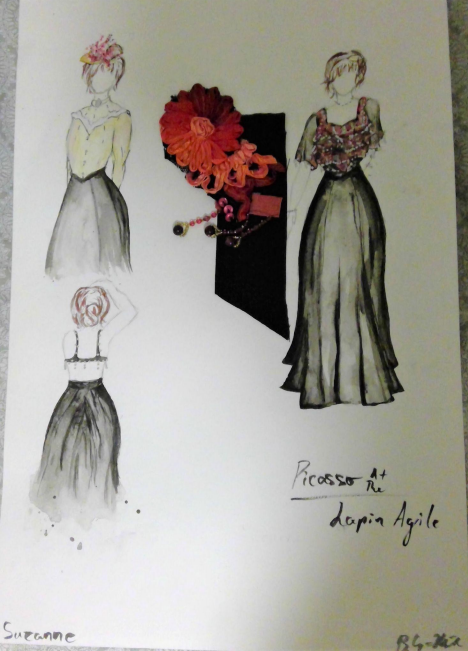 The program, a joint effort of the Department of University Advancement and Academic Affairs, provides students with a stipend which, in this case, paid Carey-Hicks to work on the project for 18.5 hours a week, rather than needing to have a summer job. However, she also put in many hours on the project outside of working hours since it was her senior project and she wanted it to be her best effort.

The play, by comedian Steve Martin who also is a noted art collector, focuses on a fictionalized meeting of Picasso and Albert Einstein in the Lapin Agile, a real café in the Montmartre neighborhood of Paris. The meeting takes place in 1904, just before they became known as visionaries who changed the way we look at the world, each through a different approach.

Carey-Hicks said her passion for historical costume research made her eager to take on the project. “I wanted to create silhouettes that would remind a modern audience of the 1904 period,” she said. “We’re right at the turn-of-the-century, so it’s leg-of-mutton sleeves and things like that.”

In keeping with that theme, she had wanted to dress some characters in the aptly named ‘hobble skirt” [3] style, a mercifully fleeting fashion that featured a hem so tight that women could walk only by taking tiny steps. She ultimately nixed the idea as impractical. “It was a complicated design process, and I didn’t want to hinder the actor’s movement, so I chose not to include one,” she said. 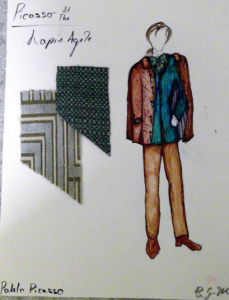 In addition to whether a costume would crimp an actor’s ability to move on the stage, audience perception and character concept were key considerations.

“Character concepts include things like personality and class, and there was a range of classes in the show,” she said. “I had waitresses and bartenders, which are very working class. They needed a wider skirt or wider legged pants because they moved around a lot, and then I had more upper-class people or people who were attempting to look more upper class, like our artist, Picasso.”

There also were gender considerations layered over class and personality influences on a character’s costume style. “Sagot, the art dealer, was very upper crust so we chose to put Sagot in a suit, even though he was being played by a female-bodied person,” she said.

That choice was one of several ways the WSU production of the play integrated LGBTQ themes. “Some women at the time would’ve worn suits,” Carey-Hicks said. “It would have been like a play on masculinity, denoting homosexulality, and we dealt with homosexual themes in the show. The main relationship between the bartender and the waitress was played by two female-bodied people.”

What costumes were the most challenging?

“I really struggled with Picasso’s design,” she said. “The final design that was on stage was like my fifth rendering.”

How was that design challenge solved?

“Initially, we were trying to make Picasso into this great artist and the exact opposite of Einstein, so I had him in a lot of starkly contrasting things and it just was not working,” she said. “So, we ended up going with a Blue Period [4] idea and sort of a mishmash of various periods. “

Even then, Carey-Hicks says she wasn’t completely satisfied but, as they say, the show must go on.

“There comes a point where you just kind of have to continue,” she said. “There’s a point where you’re like, ‘Well I have to build now.’ So, I had my own gut instinct that this would work for the actor that was wearing it and that it would be an aesthetically pleasing ensemble on him. And then the director gave me his OK. He liked it, and so we went with it.”