For Jeremy Andreatta, Ph.D., associate professor of chemistry, teaching and allyship go hand in hand, and recent University policy changes, he says, have made it easier for faculty to provide a more inclusive environment for students.

Those changes include allowing students to choose the name they wish to use and to designate pronouns that match their gender expression. The chosen identifiers can be used on all but a very few University documents and records.

“On each class roster, we see a name and if the person has pronouns that they’ve specified,” Andreatta says. “In that respect, it’s gotten a lot easier for us to be more inclusive.”

Students now can more readily make those changes because it doesn’t have to be a legal name change, which involves a lot of time and paperwork. The University has recognized that there are only a couple places in the system where a legal name is required and for everything else – such as class rosters and school IDs – it doesn’t matter.

“The barrier has been lowered and that’s had a broader impact,” Andreatta says. “For us as faculty, we no longer have to ask those questions so there aren’t the awkward conversations like, ‘If what’s on my roster is not what you want me to call you, then let me know.’ It’s just right there for us to see, and it’s one less battle they have to fight.”

Andreatta is personally familiar with those kinds of battles.

As an openly gay faculty member who went through the coming-out process in graduate school, he has compassion for what some of his students may be going through at this point in their lives. If they want to talk with him about issues they are facing, he is ready to listen and help. 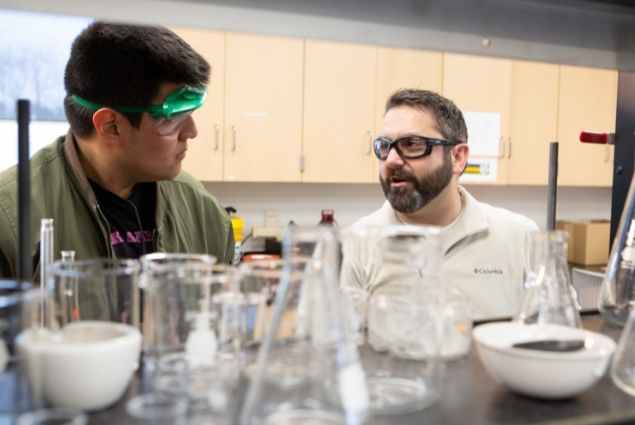 Jeremy Andreatta, Ph. D., associate professor of chemistry, and Sam Satnick ’23 discuss an experiment in the chemistry lab in the Ghosh Science and Technology building.

“I don’t ever hide from my students that I went to the counseling center in graduate school for support dealing with some things about my sexuality,” he says. “It’s the only reason I was able to stay in graduate school because it was a hard time for me. So usually when I have these conversations, it includes talking to them about our counseling center, which is phenomenal, and encouraging them to get help for their mental health.”

Worcester State also has made some strides in gender equity by hiring women as science faculty members, Andreatta says. Recently, there has been a reckoning about barriers women face among science disciplines in academia and, overall, much room for improvement remains.

“A few issues have come out over the last few years about gender identities and the inclusion of women in scientific professions,” Andreatta says. “Our (chemistry) department is somewhat special because we are almost half female, which is really remarkable.”

It’s especially impactful for female students considering science careers to have a department that represents them as far as gender equity is concerned, he says.

“I’d have to look at the numbers, but I think part of the reason we have been seeing more women in our department as majors is because they see themselves in the women faculty members in our department,” he says. “We have that representation here and I really think it makes a difference.”

This story first appeared in the Winter 2021/22 issue of Worcester State Magazine.