More than 200 Worcester State students, faculty, and staff gathered in front of the Student Center on April 27 to take part in a flag-raising ceremony and inauguration of the new Common Ground, a space that shows the University’s support of the LGBTQ+ members of its community.

The ceremony was part of the Unity initiative, which included an inaugural Unity Walk in September. The event was spearheaded by Stacey Luster, general counsel and assistant to the president for employment and equal opportunity, who said the University has wanted to raise a Pride flag on campus “for many years.”

A planning committee of 11 students, faculty, and staff helped realize this dream. One of the members of that committee was Riley McGuire, Ph.D., assistant professor in the English Department and one of the co-chairs of the University’s LGBTQ+ Advisory Committee. Several students from his LGBTQ+ Narratives course read original writing produced during the semester and gathered in a 36-page booklet that was handed out to attendees. 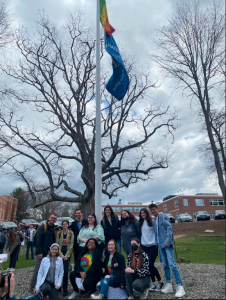 Students from the LGBTQ+ Narratives class and Professor Riley McGuire (back row, third from left)

“Too often, support is ephemeral,” McGuire said. He explained that the students in his class wanted “to contribute to making the climate [on campus] more inclusive.”

The students shared deeply personal narratives. In the poem “If Not Now, When? My Words of Honor to LGBTQ Youth,” which received Honorable Mention in the Barbara Pilon Poetry Contest, Anthony Drapos ’23 asked, “How do we even begin to assert ourselves, / into a society that rejects our very existence every single day?” and asserted, “We have to be the ones to step in and show that we care.”

In the essay “Community, Identity, Trauma,” Jonen-Marie Wood said, “Representation is so crucial in life. If a person does not see people like them it can take a toll on their feelings, thoughts, and development.”

First-year Jessica Steph shared a story about coming out of a literal and metaphorical closet. Rachel Sullivan read Kat Kraszeski’s meditation on how she defines her own womanhood, which is often in contrast with society’s definition. Gail Provo read Rachel Sullivan’s searing critique of the common link between homophobia and the fetishization of homosexuality.

President Barry M. Maloney shared his disappointment when a survey of students revealed that LGBTQ+ students felt unwelcome on campus and emphasized that Worcester State supports its community “No matter who you are, who you love, and how you identify,” adding, “Statements are important to make, but they must be backed up by action.”

Some of that action includes expanding the new LGBT+ coordinator staff position to full-time, adding chosen name options and binary opt-outs to forms, thinking about what and how courses are taught, and developing a Unity Day where students will experience a full day of activities to promote acceptance and solidarity throughout the Worcester State community.

This drive to do better was exemplified by the University’s new Pride tags, which were handed out at the event. They no longer say, “You’re welcome here.” They now say, “You belong here.”