Worcester State University hosted more than 100 area high school students on Feb. 9 for a day of programs centered on literacy in celebration of the National African American Read-In.

The Read-In was established 1990 by the Black Caucus of the National Council of Teachers of English to encourage the reading of Black authors. Throughout the day, students participated in large- and small-group discussions about literature. In attendance were students from all Worcester public high schools, as well as Southbridge High School, whose students published a blog post [1] about the day.

One of the highlights of the day was a lecture by Professor Anthony Walton, author of numerous articles and books, including Mississippi: An American Journey and a chapbook of poems, Cricket Weather. Walton’s writing often focuses on race in America and the achievements of Black Americans. 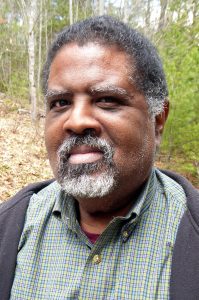 “If you want to get involved in social justice, the most revolutionary thing you can do is get an A,” Professor Anthony Walton told students.

The talk, A Letter to Me at Age Eighteen, presented some of the things Walton would have wanted to hear as a young man, based on what he had learned throughout his life. The 61-year-old professor said, “I’ve lived through interesting—to put it mildly—times.”

Walton advised the students to do as well as they could in every stage of their lives. One of the keys, he said, was to keep learning: learn how to accomplish things, learn a craft, learn from the people around you. He encouraged students to be bold, to ask people for help, to find a mentor. “People can’t help if they don’t know what you need.”

Walton encouraged students to study history “to be a better citizen” and to put effort into schoolwork. “If you want to get involved in social justice, the most revolutionary thing you can do is get an A.”

Walton closed his talk with the advice, “Learn how to lose.” “Defeat is often setting the stage for a larger triumph,” he said. “There’s a lot of work that comes before you are able to win.”

After the lecture, students lined up to ask questions. Among students’ questions was, “What was one of your biggest motivations that kept you going?” Walton’s answer was twofold: his parents, who sacrificed and worked hard to give him and his siblings opportunities, and his dream of being a writer. Of the fulfillment of that dream, Walton said, “I had luck, but I made some of that luck.”