Victoria Porteiro knows what it’s like to go to class on an empty stomach. The Worcester State graduate student is food secure now, but that wasn’t always the case during her undergraduate years at another school.

“It’s kind of like a big elephant being a student who’s hungry on campus,” Portiero said during a panel discussion on the topic in the Student Center Blue Lounge April 11. “You’re embarrassed. You don’t want to say that you don’t have enough money to eat. When you go to class, you’re uncomfortable but you are expected to provide academic excellence. When you’re hungry, it affects you academically, physically, and mentally.” 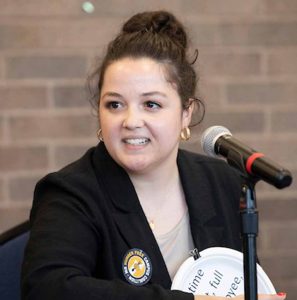 Victoria Porteiro on the student panel at the event

The panel discussion, presented by the University in partnership with the Hunger Free Campus Coalition, highlighted efforts on college campuses across the state toward ending student hunger.

The event also honored state Sen. Harriette Chandler for her leadership to advance hunger-free campuses statewide. She is sponsoring the Hunger Free Campus bill, which is working its way toward passage in the Massachusetts Legislature. Under the bill, the higher education commissioner would administer grants to schools that have been designated as a “Hunger-Free Campus.”

Maloney said Sen. Chandler is one of the champions in the fight against student hunger, and he presented her with a proclamation from the University recognizing her many efforts at solving the issue, including emergency funding for food for impacted students during the pandemic.

The added stresses of the pandemic years exacerbated what had been an already pervasive problem of hunger on campus, Sen. Chandler said. “I don’t think most of us realize that hunger is a problem,” she said. “We think of college students as self-sufficient or having wealthy parents, but that isn’t really true.”

Here in Massachusetts, she said, pre-pandemic studies showed that 37 percent of students at public colleges and universities experience food insecurity and struggle to afford nutritious meals, she said. Food insecurity at some schools reaches rates greater than 50 percent among students of color, including Latinos, immigrants, blacks, and LGBTQ students, she said. 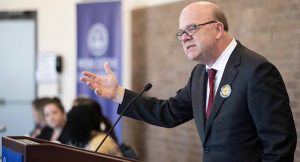 In response to this great need, Chandler co-sponsored the Massachusetts Hunger-Free Campus initiative, but even with the anticipated passage of the bill, much work remains. “I know that we can do more to address hunger on our college campuses, especially for those who are the most vulnerable,” she said. “Our students deserve to learn and thrive, and it is time to end hunger on campuses.”

Hunger is an issue that Rep. McGovern also has been concerned about for many years. “We live in the richest country in the history of the world,” he said. “Hunger should not exist in this country. It is a political condition. We have the money, we have the resources, we have everything but the political will. Food ought to be a fundamental human right for every single person, not only in this country, but on this planet.”

It is a myth that all students can rely on their parents to pay for everything, he said, and many, if not most, college students, can’t fall back on their parents when they need help. “Just arriving on campus with tuition payment is not enough,” he said. “There’s rent to pay, there’s books to buy, class fees that add up, extra fees you didn’t know were even going to pop up, and that’s just to get started.”

McGovern cited a study that estimated as many as 59 percent of college students will confront food insecurity at some point, threatening their ability to graduate and achieve their professional goals. “If you’re hungry, it’s hard to concentrate. You can’t learn when you are worried about how you’re going to get the food to sustain you.”

Anna Johnson ’22, Worcester State’s student trustee, picked up on an assertion McGovern made in his remarks: that hunger is solvable if we can only muster the political will.

Dr. Pedraja said he didn’t have any prepared remarks because he wanted to speak from the heart about his personal experience with hunger. “I remember as a child being hungry, not having enough to eat,” he said. “And my parents desperately trying to find food and not finding it. The best that my dad could do was find some stale bread, moldy and not fit for human consumption.”

He said he was surprised, as a Cuban immigrant coming to The United States, to find hunger was so persistent here. “I had thought America was the land of plenty, the land of opportunity that could send people to the moon,” he said. “Anything could be done in America, and to come and find that there is hunger, that there is homelessness, that’s something that really struck in my heart. It shocked me. It surprised me. And we can do better.” 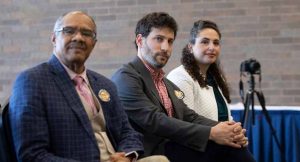 That sentiment was echoed by Porteiro, who hasn’t forgotten the food issues of her undergraduate days even though her full-time job in the Worcester State Office of International Programs means hunger is a thing of the past for her.

“We are the greatest country in the world and the richest country in history and we still have students who are hungry,” she said.

It’s easier for Porteiro to talk about being food insecure now that she has been able to move on from that struggle. “The days I couldn’t find food were really hard and it was tough to study,” she said. “My grades were dropping and I had to withdraw from a class because I couldn’t focus. Not enough resources were available for students so often I would eat the unhealthiest food just to get by because that was all that was available to me.”

Porteiro and other students on the panel said they were speaking out about hunger on campus hoping that the day would soon come when all students could get back to focusing on their education and not where their next meal was coming from.