The university’s four highest achieving students this year bring wide ranging interests from the arts to biology, and a passion for helping others. The four students – who have the highest GPA for each undergraduate class – were recognized at the April 21 Academic Achievement Awards with the Lt. Colonel James F. Sheehan Awards, named for the late alumnus and university benefactor who gave generously to Worcester State.

“His legacy shall shine brightly through these outstanding students who receive these awards, our Honors Students, the students who live, study and dine in Sheehan Hall, and the faculty who are the beneficiaries of his largess, in perpetuity,” said Provost Lois Wims at the awards ceremony. 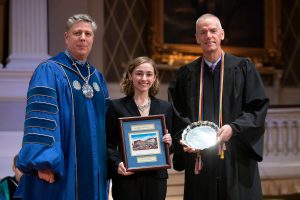 Freshman Delaney DeNorscia ’25 has long had a fascination with the arts. The Honors Program student recently declared her major in theatre and minor in writing. “I’m very excited,” she said. “I’ve always been interested in the arts: writing, drawing, acting and singing.”

The Holden native is the treasurer for Almost Off Book, the student drama club. She recently authored two short plays, The Dating Fairy and What’s Up G-Man?, that were staged as part of the club’s show this spring. Delaney also played the role of The Countess in the fall production of Picasso at the Lapin Agile.

Outside of school, Delaney uses her art tablet to draw cartoons and comics. She has a love of singing, as well, and for years took voice lessons. “When I’m driving or home alone, I’m always singing to myself.”

Delaney is excited to see where her interest in playwriting will lead her. “I know that I want to experience everything I can along the way, and I hope to do that through the things I really love,” she said. “I guess I’m trying to connect to my artist side.”

She envisions a career that allows her to express herself – and reach others. “Creativity is one of the most important things to me. I want to evoke emotions through my art, and reach as many people as I can.” 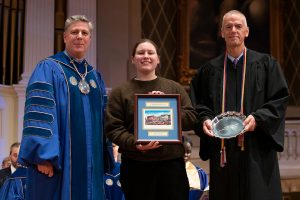 After a freshman year of remote learning, sophomore Lauren Connolly ’24 says she is enjoying exploring life at Worcester State – from interesting classes and extracurriculars, to all the city has to offer.

“I’ve really enjoyed coming to college,” she said. “I felt it was really an experiment with finding out what I want to do. I have had the opportunity to take so many classes, and I’ve found a lot of special interests. I’m really happy I’m meeting a lot of people.”

A business administration major from Ashburnham, Mass., Lauren says she wants a career that allows her to work with people. “Business is an open track where I can experiment with that. I’m going where life takes me.”

Outside of the classroom, Lauren is a musician. She began playing the alto saxophone in the third grade. In high school she auditioned for jazz band, but they didn’t have any more alto spots, so she picked up a new instrument: trombone. “They both have their own charm and different sounds,” she said of her two instruments. “I love both of them.” She went on to play in both the marching and jazz bands at Oakmont Regional High School and hopes to join the Worcester State Jazz Ensemble.

“I have been working on my music outside,” she said. “I’m a big fan of jazz. I do a lot of improvisation. It’s fun and it helps me relax. I did play in a lot of ensembles, and recently I have enjoyed playing at my own pace.” 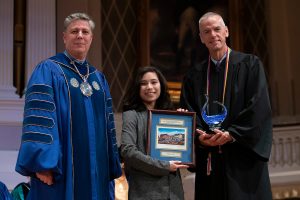 From plants to the human body, biology major Amanda Lo ’23 is fascinated by how things work. With double minors in chemistry and psychology, she is considering medical school.

“I’m a hands-on person, and I enjoy solving problems,” she said. “The idea of someone coming to you with a problem and being able to figure out what they have seems fun, like detective work.”

Amanda is currently doing a research project with the plant species Arabidopsis, a small flowering weed, to compare the growth rates of mutant Arabidopsis with enlarged chloroplasts – the part of the plant where photosynthesis happens – with regular plants in both light and shade conditions. She has 50–60 of them growing in the University’s greenhouse.

“I’m finding the mutants are growing faster. They are bigger, so they can absorb more light and make food for themselves,” Amanda said. “They got flowers way before their normal counterparts.”

The project could have implications in the commercial crop industry. “We largely depend on crops to feed us. It is important that we investigate the potentially beneficial genetic mutations of Arabidopsis plants. Since it’s a model organism, we can apply these findings to our food sources.”

Outside of school, Amanda works as a Spanish medical interpreter at a local free medical clinic. “I’ve learned a lot, and it’s made me very aware of my privilege. It’s made me so aware of how important it is to be there in the community and do what you can, because there is always someone who needs you.”

In high school, Moira O’Sullivan ’22 had the opportunity to shadow a speech language pathologist who worked with individuals who had experienced strokes, traumatic brain injuries or neurological issues. After that experience, she knew what she wanted to do as a career. 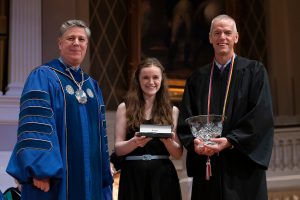 “I loved how caring it was, and it is very personable,” she said. “Giving someone a voice was so impactful to me.”

She is graduating with a degree in communication sciences and disorders and a minor in Spanish for healthcare professionals, and she is heading to graduate school for speech language pathology.

She keeps a full schedule that includes tutoring at Worcester State for classes in speech disorders and anatomy and physiology for speech and hearing. On the weekends, Moira, who is from Ludlow, Mass., works as a receptionist at a skilled nursing and rehabilitation center.

Through Worcester State, Moira has taught for three years in the AmeriCorps-affiliated program Jumpstart, which provides language, literacy and social emotional learning for preschool children in under-resourced communities. As a team leader, she leads learning activities with preschoolers ages 3 to 5.

On any given day they might have story time and learn all the vocabulary words in the book, sing songs, make muppets, do puzzles or make artwork. “It’s extremely rewarding,” Moira said. “It’s so chaotic, and that’s when it is the most fun.”

Her work at Jumpstart has her considering speech language pathology with children. “I love working with kids. There is a lot more you can do with kids in hospitals and private practice.”