Worcester State University welcomed more than 400 accepted students and their parents at Congratulations Day on April 2. The event featured campus tours and information about academic offerings, financial aid, and student life to help students decide whether WSU would be right for them.

“You’ve all worked exceptionally hard to get to this point,” said Joseph J. DiCarlo, Dean of Enrollment and Director of Admissions, during opening remarks in the competition gym of the Wellness Center. “I know you have a lot of options, and our hope is that after today’s visit you will feel at home and envision yourself learning and growing and becoming a solid member of our campus community and a part of Lancer Nation.” 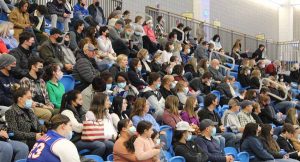 A crowd listens to opening remarks in the Wellness Center competition gym at Congratulations Day.

WSU President Barry M. Maloney told the group that, whether they live on campus or commute, Worcester State’s many offerings will mean an enriching college experience for them. “Our academics are excellent and will provide you with a competitive edge in life going forward,” he said. “And Worcester State is a university that supports its students. We like to feel as if we have each of our students’ backs as they make their way through their four years here.”

While some students were still mulling acceptance offers from multiple schools, many students, like Nico Martinez, a Leominster High School senior, had already decided that Worcester State was the key to a bright future.

“It’s close to home and it’s affordable and I know I can get a good education here,” Martinez said. Like other students interviewed on Congratulations Day, Martinez said it was a personal connection that sparked his interest in WSU. In his case, the connection came from WSU football Coach Adam Peloquin ’12. “He reached out to me and really made me feel wanted and like I would feel at home at Worcester State,” Martinez said. “I also know a few kids that came here before and they said they loved it. They said it was just a great experience.”

Martinez’s mother, Stephanie Martinez, was pleased with his decision. “I’ll get to attend his football games,” she said. “I have a son who went to college in Florida so I’m excited to have one closer to home and where he’s also going to get a good education.”

Nico Martinez and his mother, Stephanie Martinez, at Congratulations Day.

Ryan Forsythe, Vice President for Enrollment, explained that Worcester State offers a program called Major Plus, an academic framework that assures that students complete a bachelor’s degree with not just one academic program, but two. “This makes your education broader. It means that you can more fully explore the interests that you have,” he said.

Innovative programs like Major Plus are one reason a Worcester State education is a good investment for students, along with the reasonable tuition costs of a state institution, Forsythe said. “We know that our students benefit from the education that they receive here,” he said. “Ninety-nine percent of our students two years ago reported that they were either employed or in graduate school or both within six months of graduation from Worcester State. Those are the types of statistics that you hear from high-cost private institutions and those students are having the same experiences right here at Worcester State.”

In addition to being a good value, flexibility and proximity are some of the reasons Jiovana DeJesus, a senior at South High School in Worcester, chose Worcester State. “It’s super close to home and there are a lot of nice clubs you can join to make new friends,” she said.

Her mother, Joannie DeJesus, said Jiovana applied to several schools but chose Worcester State after she received a quick response to her application. Attending WSU also means her daughter can continue working part-time, she said. “She can go to school, learn, and get a great education while she’s working,” she said. “Worcester State is a really good school and has a lot to offer her, so that’s why she chose it.” 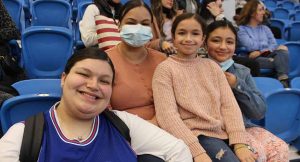 Carelis Rodriguez and her mother and sisters in the Wellness Center gym.

Carelis Rodriguez, a Southbridge High School senior, will be an incoming first-year student this fall but she already is familiar with the Worcester State campus. As a young teenager, she used to accompany her mother to WSU’s Intensive English Language Institute. “My mom came here for English studies, and I came with her and hung out in the library and on campus so that’s what inspired me to come here and get my education,” she said. She plans to major in Criminal Justice then continue her training at the Police Academy for a career in law enforcement. 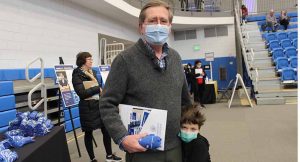 Taking an evening art course at Worcester State is what inspired Charles Shepard of Worcester to return to college after many years to finish his degree. “I took an art class here two years ago

and I really liked the teacher,” he said. “She got me hooked on Worcester State.” Shepard plans to enroll part-time in the fall while he continues working in his career in industrial safety. “Completing my degree is something I’ve wanted to do for a long time, so I figured I’d do it now rather than wait until later,” he said. “And I also think it will be a fun thing to do.”