“I thought to myself, ‘Oh, I’ll just finish my degree later.’” This phrase, spoken by Brittany Morgan ‘20, is often the death knell of the undergraduate degree. After living on campus and studying psychology for three years, Morgan left Worcester State in 2007 for a job with a police department, where she found herself excelling.

“I moved home and took the civil service exam,” Morgan says. “No educational incentives were offered, but it was a really great opportunity at the time and I didn’t want to pass it up.”

As fate would have it, Morgan relocated to Worcester in 2014, where she started a family and began thinking about the promise she made to herself back in 2007. She decided she would finish her degree.

“After I had my daughter I kind of got to a point where I wanted her to be proud of me and see that I didn’t give up after so many years away,” she says.

The first hurdle Morgan had to overcome was her schedule. At the time, she was working 40-50 hours a week as a 911 emergency services dispatcher, while also caring for a baby. Morgan immediately turned to her advisor, Professor Champika Soysa, Ph.D., for guidance.

“Dr. Soysa was my advisor when I started at Worcester State back in 2003,” says Morgan. “And she suggested that I take a class a semester–whatever I could afford out of pocket. It’s amazing to me that 17 years later, she was still trying to get me there.”

Once she enrolled in classes and began chipping away at her degree, Morgan’s next challenge became juggling her busy schedule, which included work, classes, homework, and parenting. When worlds collided, Morgan got creative, oftentimes arriving to her Research Methods class with her toddler daughter strapped to her chest in a carrier. Morgan remarks on how much her daughter enjoyed sitting quietly, staring at the students as they worked.

“I had a lot of late nights–nights where I stayed up much later than I should have. That was the only time I had free time,” she says.

In addition to time constraints, Morgan had to contend with the nearly two-decade gap between herself and her classmates.

“A lot of the high-level courses that I hadn’t taken in so long–that was probably the toughest part about it. You know, I’m in classes with students who are 20-21 and I’m 35. It was intimidating for sure,” she says.

But again, Morgan points to the dedication of her professors as one of the reasons she was able to persevere:

Of her final year at Worcester State, Morgan says that she’s disappointed that she’s not able to have a traditional commencement ceremony (she even had a special t-shirt made up for her daughter for the occasion). On the other hand, she’s glad to have made it through such an unpredictable and unprecedented time, especially since she’s been carrying twins (due around August 8) for the better part of it.

Now that she’s earned her degree, Morgan plans to continue working in emergency dispatch for a while. Then she hopes to pursue a career in social services, particularly helping ex-inmates reintegrate into society. 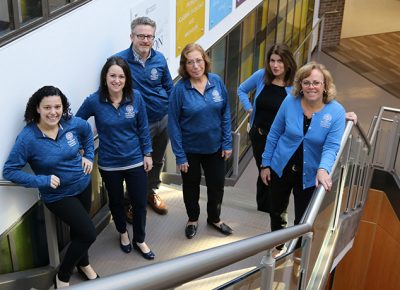