A Look Back at Worcester in the World

With the 2011 theme semester coming to an end, Dr. Robert Brooks, chair of the Criminal Justice Department and director of the Theme Semester program, believes that the Worcester State University was very involved with the first theme semester. More than 30 classes were offered during the semester, each relating to the “Worcester in the World” topic.

The faculty “appreciated the power the program had on their students,” Brooks noted. The program stimulated different departments to talk to each other and focused on having an integrated learning community.

Brooks said he felt that the students were able to make connections between their different courses because of this theme semester. Students got the sense of being part of a collective group, especially students who took more than one “Worcester in the World” course, meeting the goal to “have courses feel more integrated,” he added. Twelve events were tied to the initiative, as well as the John Perkins’ lecture, all of which enriched and reinforced the theme of “Worcester in the World.” John Perkins’ book, “Confessions of an Economic Hit Man,” was assigned to all first-year students.

This was the first time a common reading assignment was given to all freshmen students. His lecture in October was a definite highlight of the series, almost filling the Sullivan Auditorium on show night, according to Brooks. Other highlights included the EarthView globe set up in the exhibit area of the Student Center on opening day, The Gallery show named “Global Perspectives,” the screening of the film “Ciclovida: Life Cycle” and the student play “Good Person of Setzuan.”

The fall 2012 theme semester will be named “Contagion,” Brooks said, adding that the term has a wide variety of meanings and themes, including concepts of infection and quarantine, addiction, rumors, religion, recruitment, peer pressure, idealism, rebellion, love and hope.

The main focus of this upcoming theme semester will be departments learning from other departments, with information spreading, Brooks explained. Theme semesters are meant to be as broad as possible, he added, so every department can try to have courses tie into the theme.

Adam Zahler, assistant professor of Visual and Performing Arts and WSU Theatre’s director, has already gathered a small group of students to generate ideas for the fall 2012 theater performance so it can tie in with the theme contagion. Brooks said he hopes that the University will continue with the Theme Semester program in the coming years and it will continue to grow. 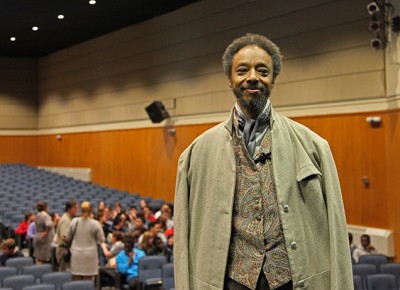 Guy Peartree took a break from portraying Frederick Douglass to hold a workshop titled "Dramatic Story Telling as a Window into History" for WSU students and faculty in the Eager Auditorium. Peartree . . .