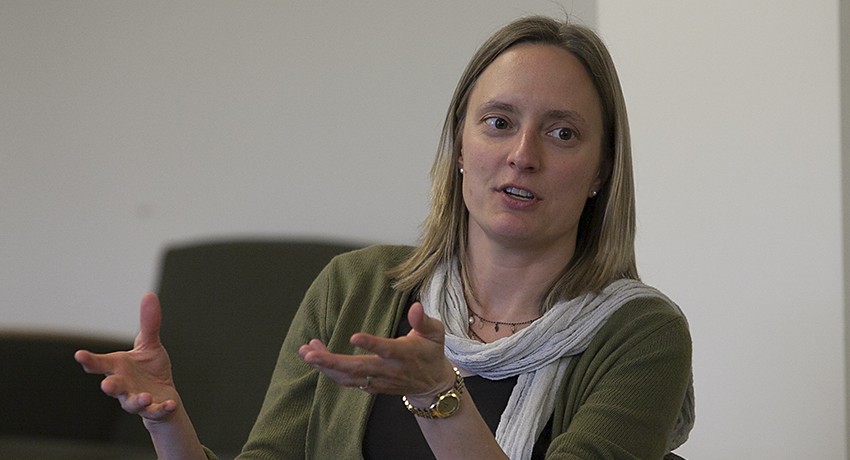 Much of what scientists know about the global impacts of volcanoes can be traced to the little-known eruption of Icelandic volcano Laki in 1783, which sent plumes of lava higher than the Burj Khalifa in Dubai into the sky, according to science writer Alexandra Witze.

Worcester State University’s Honors Program sponsored Witze’s visit on Thursday, March 28. In addition to her 11:30 a.m. lecture in the Student Center’s Blue Lounge, Witze led a workshop on science journalism writing at 2 p.m. in the faculty lounge of the Sullivan Academic Center.

“By a lot of measures, it was one of the worst natural disasters to happen to Iceland, and to all of Europe, for a very long time,” she told an audience of more than 100 students, faculty, staff and community members.

“Lava poured across the landscape for eight months, nonstop. More than anyone had ever seen, or would see, again,” she said. “Along with this came a choking volcanic fog, which spread all around the northern hemisphere. This is what made Laki really different from your typical eruption.”

While officially 10,000 people died, scientists estimate as many as six million people died in the year following the final eruption, Witze noted. Scientists believe the dry, poisonous fog that sat over Europe eventually spread to northern Africa and as far south as Japan, causing widespread respiratory illness, crop failures and starvation. It cooled Europe and North America by 1.3 degrees Celsius for two to three years.

The tendency of Iceland’s volcanoes to erupt with such force is rooted in the country’s geographic location, right on the Mid-Atlantic Ridge and above a “separate plume of hot rock coming from below, what’s called a hotspot,” she said. “This is where new rock is being born every day.”

To help tell the story of Laki, Witze shared the stories of three people:

“It tells you that you really need to pay attention to this stuff,” Witze said of Schmidt’s research. “People who don’t live right next to it may be affected by” an eruption.

“The main thing I hope you go away with from this talk is, we live on an active planet,” Witze said. “It’s rumbling beneath our feet every day, and sometimes it’s going to erupt. We have to make peace with that fact, and realize that we live on a restless Earth. 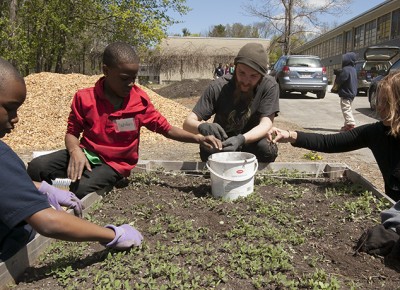 Urban Studies Professor Establishes 'A Garden for All Ages'

An empty lot across the street from Worcester State University has been transformed into “A Garden for All Ages,” a project spearheaded by Urban Studies Professor Maureen Power, Ph.D., and the . . .