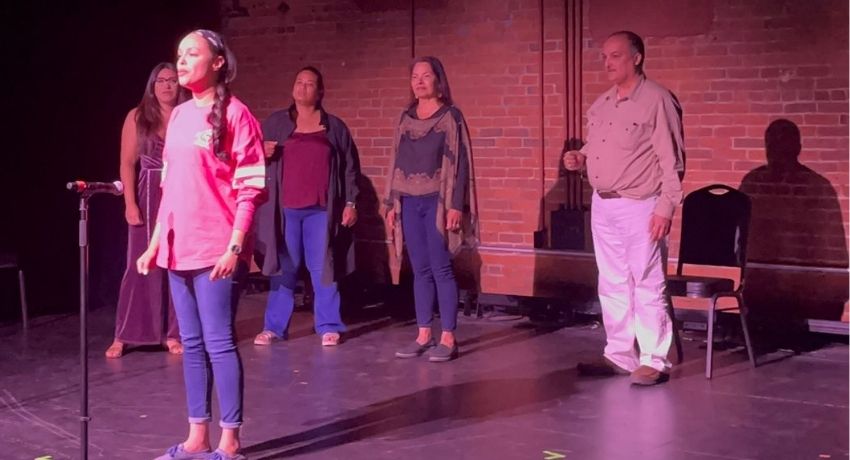 The courageous Mirabal sisters, who helped topple a Dominican dictator decades ago, will be the focus of a special Spanish-language play Saturday at Fuller Theater.

The event will be a staged reading of the play Correr o Volar (Run or Fly), based on a script by Déborah González, Ph.D., director of Community Bridges at Quinsigamond Community College.

The play is directed by Poliana Alarcón Bustos M.A. ’19.

The cast features adult members of the local Latino community who are or have been associated with Worcester State’s Latino Education Institute throughout the years, whether through participating in LEI programs or as employees. LEI and the Visual and Performing Arts Department are supporting the project by offering rehearsal space, stage time, props, and other assistance. VPA students also helped bring the play to life, Alarcón Bustos said.

Correr o Volar tells the story of the Mirabal sisters of the Dominican Republic who became heroes for their resistance to the ruthless dictatorship of Rafael Trujillo, a military strongman who ruled the island nation for more than 30 years. A massive public outcry ensued when the sisters were murdered by Trujillo’s henchmen in 1960, fueling social unrest that led to his assassination in 1961.

While the play focuses on the legacy of the Mirabal sisters, the adaptation expands the concept of the struggle against repressive power to include all of Latin America, where the people of several countries suffered under dictators throughout the 20th century (and some still today).

“We adapted Dr. Gonzalez’ play a little bit because we wanted to make it more universal,” Alarcón Bustos said. “The Mirabal sisters’ story is about a country in the Caribbean, but there have been dictatorships throughout the whole continent at different times. So, instead of calling him ‘Trujillo’ in the play, we are calling him ‘El Dictador’ because we want him to represent all these dictators who were oppressing their people and killing those who opposed them. Dr. Gonzalez has kindly shared her beautiful work with us.”

Correr o Volar tells the story of the Mirabal sisters of the Dominican Republic who became heroes for their resistance to the ruthless dictatorship of Rafael Trujillo, a military strongman who ruled the island nation for more than 30 years.

The idea for the theater project came from Hilda Ramirez, executive director of LEI, who asked Alarcón Bustos to do a play that would feature members of the Latino community. Alarcón Bustos, now in a doctoral program in Spanish Literature at Boston University, has many years’ experience as an actress and has worked with LEI on theater projects over the past six years.

“Hilda said, ‘Let’s do this play without any real actors, with people from the community,’” she said. “So, we gathered people who have been part of the LEI program in different ways.  The youngest person is 28, the oldest is 65.  They are real people who wanted to have a new experience and know more about art”.

Auditions were held, and rehearsals began in February 2020. “This has been a long process because we started right before COVID,” Alarcón Bustos said. “We continued doing it online – mostly discussing theoretical and historical content – but then we stopped because it became too much with the pandemic.”

Rehearsals began again as the pandemic eased, then continued to ebb and flow with each of the pandemic’s waves. “It’s been two years in and out, so this is a staged reading,” Alarcón Bustos said. “They are going to have their scripts in hand. They are real people, not actors and I didn’t want to pressure them too much. They do know their lines, but I just want to make sure they are comfortable on stage.”

The March 5 performance occurs close to this year’s International Women’s Day on March 8, a significant alignment, according to Alarcón Bustos.

“We wanted to cover other issues that have happened over the years in Latin America and to respect the Mirabal Sisters because they are really symbolic of struggles women have faced,” she said. “It’s a struggle to fight against power. It’s not only circles of power within the government. It affects every layer of daily life. It affects the way people talk to you being a woman in a patriarchal world. In my own county (Chile) as a woman, sometimes I have to explain things two or three times because people are going to question me because women aren’t as validated as we should be.”

What does Alarcón Bustos hope the audience takes away from the play?

“We want this experience to be an immersion into Latin American culture,” she said. “We want the Latino community to know more about Latin American history. Many people in Worcester are Dominican and we also want to tell them that this struggle against dictatorship didn’t happen only there. It’s a more universal thing.”

“They are super engaged,” she said. “I am impressed with how, even though they are not trained to do this, they put their souls into it to make it work and to make a coherent narration. I’ve seen such a change in them from the beginning to now. They have grown a lot and I’m so very proud of them.” 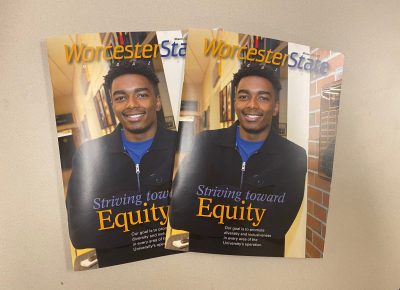 Now online and hitting mailboxes soon: the latest issue of Worcester State Magazine: Striving toward Equity.  The issue is devoted to examining how the university is striving to create equity and promote diversity and inclusion. As President Barry M. Maloney notes in his President’s Message: “I will say we’ve made some progress so far, and there is much more to do.”  Feature . . .