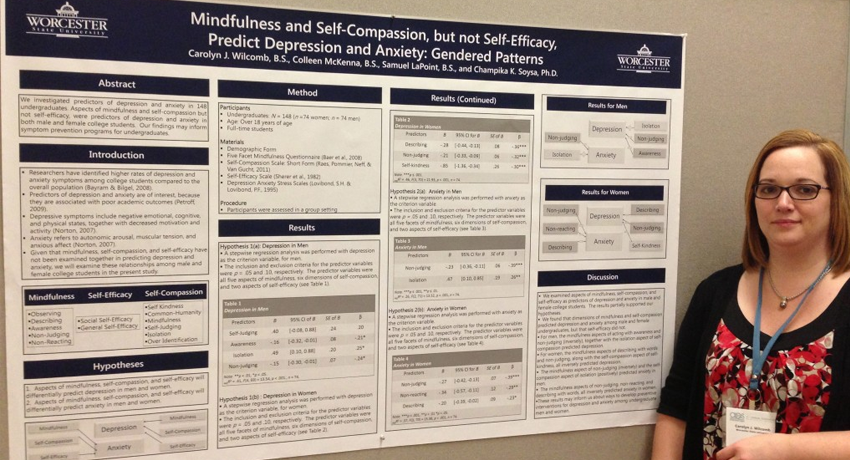 Alumna Explores the Correlation Between Mindfulness and Depression in Undergrads

In 2011, Carolyn J. Wilcomb ’12 and Dr. Champika K. Soysa conducted a study among full-time undergraduates at Worcester State University to examine how the facets of mindfulness, self-compassion, and gender can be predictors of depression, anxiety, stress, and well-being.

Their two years of research culminated in an article that was published last September by Mindfulness, a peer-reviewed scientific journal that covers the current research in this developing scientific field. Wilcomb has presented her findings at psychology conferences across the country, and has been accepted into every Master’s program for which she has applied, one of which included a full scholarship. She is currently enrolled in the master’s program for psychology at Wheelock College.

“Undergraduate co-authorship on peer-reviewed journal publications are extremely prestigious and rare,” said Dr. Soysa in regards to the article. She believes that Wilcomb’s success shows the benefits and opportunities for undergraduate research that are available through WSU.

According to the article, college students experience significantly higher levels of stress and lower levels of psychological health than the general population. Indicators of psychological distress include low levels of mindfulness, which is defined by Jon Kabat-Zinn, founder of the Center for Mindfulness at the UMass Medical School in Worcester, as a heightened and deliberate awareness of both internal and external experiences taking place in the present moment. While the concept remains universal, different demographics use the facets of mindfulness in unique ways.

“College students experience high levels of psychological distress as they juggle demands from family, friends, professors, and employers,” explains Wilcomb. “Therefore, it is important to identify factors that contribute to distress in college students.”

The survey created by Soysa and Wilcomb included questions relating to age, number of course credits for the semester, and ethnicity: all of which were factored into their findings. Particularly interesting was the self-efficacy data, which revealed that college women reported lower psychological health than their male counterparts.

Wilcomb hopes that their findings may inform clinical interventions aimed at decreasing distress and enhancing well-being among undergraduates. 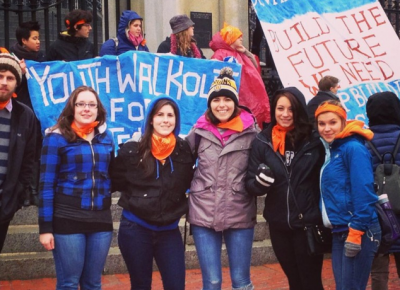 Students Rally at the State House for Climate Issues

On Monday, March 31st, eight Worcester State students joined some 200 other Massachusetts college and high school students in the Youth Walkout for Climate Justice at the State House in . . .