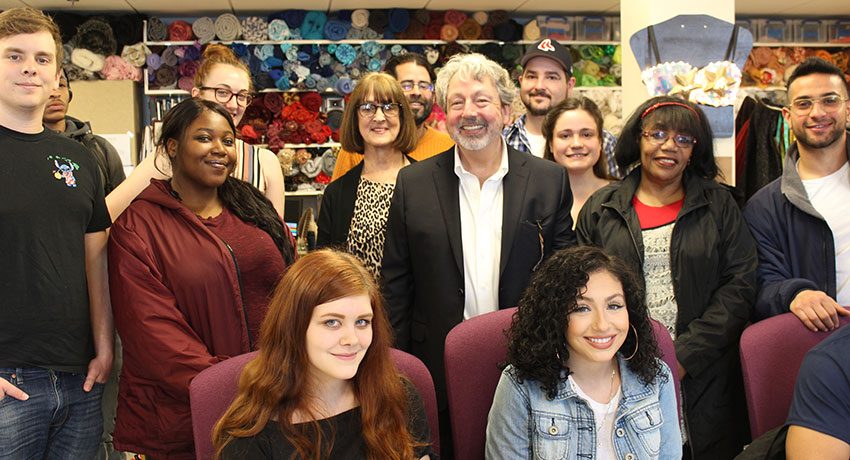 Oscar, Calvin, and Andy. Worcester’s own nationally noted fashion designer, James Hogan, refers to two famous fashion icons and a premier pop-artist by just their first names. He knew them well during his younger days as a frequent patron of New York City’s legendary Studio 54 nightclub in the late 1970s and early 80s.

“But you’re all way too young for any of that,” Hogan said recently to students, where he had been invited to speak by the costume design and theater classes. The students, however, wanted to hear more about how he had dressed the likes of Elizabeth Taylor, Bette Midler, and Diana Ross, stars so brilliant, their celebrity resonates through generations.

“I really loved his anecdotes about them,” Libby Sterns ’20 said. “That hit home for me. I look up to them a lot as actors and musicians, so I definitely related.”

Hogan withdrew from celebrity fashion circles in the late 1980s, when big designers began paying outrageous sums of money to get stars to wear their clothes at awards events. Up until then, celebrities used to buy the clothes they wore to high-profile occasions.

Hogan continued selling his clothes at prestige retailers such as Nieman Marcus for many years after that, but now offers them exclusively in his Worcester store at 664 Pleasant St. and at a second store in Savannah, Ga., where he spends winters.  The stores carry other high-end labels as well.

Hogan does not slavishly follow the latest trends but focuses on impeccable craftsmanship and designs that cater to people who still want pretty clothes, like something the ever-elegant Audrey Hepburn might wear. Among dresses he brought to Worcester State to show students was one Hepburn likely would have died for—a stunning full-skirted gown with a sculpted, black, drop-waist bodice that he had made for a mother-of-the-bride in Sonoma, Calif.  The skirt, white with black floral-patterned flocking, was made from imported fabric that cost $600 a yard. How does he justify spending that much on cloth? “If you really love something, other people will, too,” he said. “We’ve actually sold out of this fabric.”

The completed dress cost $5,000, but driving the price up was the voluminous skirt requiring yards and yards of the expensive flocked fabric and that fact that the glistening bodice had been hand-beaded by Hogan’s assistant, Pam Hair, who accompanied him to Worcester State.  Hair’s specialty, Hogan said, was meticulously matching up patterns across seams, lapels and button plackets. “She even matches things that can’t be matched,” he said, obviously in awe of her singular skill. “It’s something that you really can’t find anywhere else.”

To demonstrate, he showed a dress in an all-over print that had splashy pink roses on a bright green background. He designed it for a client to wear to the Kentucky Derby “so she wanted something Kentucky Derby-ish,” he said. No matter which way you turned the gently fitted dress, Hair’s cutting and matching expertise was on view and nowhere was a rose nipped or clipped to make way for a seam or a stitch. All were in perfect full bloom.

After the presentation, which was in the Fuller Theater, several students raised their hands to ask questions, including advice on fashion.  “Is it OK to wear suspenders with pants that have belt loops?” one male student asked. “It’s a fashion statement,” Hogan answered. “So, you can do whatever you like.”   Another male wanted to know if Hogan found men’s fashion to be somewhat constricted. “There are much tighter constraints,” he said. “But this year a man wore a tuxedo ball gown to the Oscars, so how great is that?”

Students also wanted to know how Hogan got his start. He began his design career in 1979 after attending the Fashion Institute of Technology in New York. During his first season, his label appeared at Barney’s, Bergdorf Goodman and Saks Fifth Avenue, some of the most exclusive stores in the country. In the years since that first collection, his clothing has been carried by the top retailers and fine boutiques throughout the United States and has appeared in Women’s Wear Daily, W, Vogue, and Town & Country as well as other leading fashion publications.

Hogan told students he grew up in Worcester across the street from Worcester State. When he told his parents he wanted to be a fashion designer, they told him he was delusional and that he should go to college and get a real job. He followed his dream, however, and while still a senior in high school managed to land an apprenticeship in Boston with famed designer Alfred Fiandaca, who created clothes for Julie Andrews, Joan Kennedy, and Nancy Reagan, among others.

When, after several months, Hogan decided he wanted to leave and go to college, Fiandaca offered to double his pay with a full-time position. “I can’t. I have to go back and graduate from high school in a few weeks,” he said. “How old are you?” Fiandaca asked. “Eighteen,” Hogan said. “Nobody’s eighteen,” an incredulous Fiandaca said.

After moving to New York to attend the Fashion Institute of Technology, Hogan made his own clothes to wear to Studio 54 because he couldn’t afford to buy any. The hip young student’s style began to get noticed and soon he was fielding requests from a fashion-conscious crowd that included artists, musicians, and theater people.

His big break came when statuesque international model Iman wore one of his dresses into Henri Bendel in New York. Bendel’s called Hogan shortly after and asked for six pieces to put in the prestigious store. Hogan had no production capability yet at that point but also felt he couldn’t do all six pieces by hand. A mentor told him that it was cheaper to have 40 dresses made in a shop than it was to have six made, so Hogan went around to other top department stores. “I would say ‘Do you want to see my clothes’ and they would say, ‘Nope,’” he said. “Bendel’s was the most prestigious store at that time, so then I would say ‘I have some pieces in Bendel’s’ and they would say, ‘We’ll take some.’”

It wasn’t long before his fashions graced the most famous trendsetters.  His reputation carried on even after he bowed out of the notoriously fickle celebrity circles—a few years ago, he was backstage at a Rolling Stones concert and someone asked Mick Jagger how he knew Hogan. “He dressed all of my wives,” Jagger said. 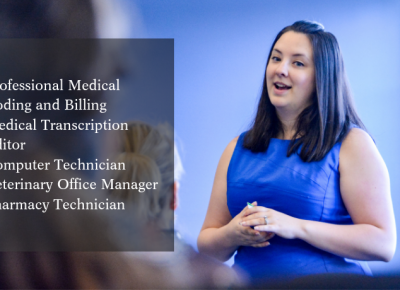 The Center for Business and Industry (CBI) announces the launch of 17 new career-focused, non-credit, healthcare education and professional training initiatives for medical assistants, billing and . . .