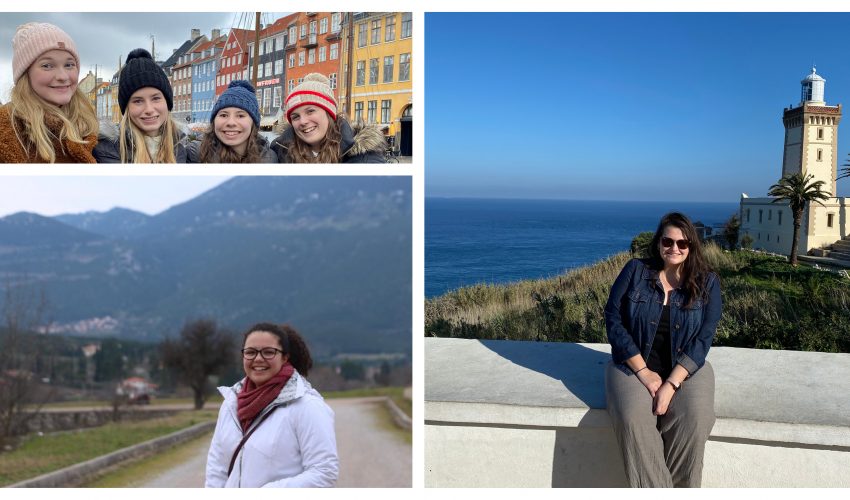 Worcester State students studying abroad, told to come home at the beginning of the COVID-19 pandemic in March, were disappointed that their experiences were cut short, but happy to come home as borders began to close.

Bryana Santos was studying in Athens at The American College of Greece (ACG) and had been there for about two months when she was informed that the school campus would be closing and operating online because of the outbreak.

“I was just hanging out in the dorms,” she says. “At first, we weren’t told we had to leave from ACG, but because of everything happening, students wanted to go home, some home schools were making students come home. Within two days, half of my program was gone.”

Santos and fellow Worcester State students studying abroad were informed by email that they would have to leave, and the next week ACG told all study abroad students to return home.

“At first when the news about the outbreak started in Italy, around mid-February, I did not want to leave at all,” Santos says. “I still had trips planned to travel, I was getting used to living in Athens, it was all becoming comfortable. A month later, when the outbreak had gotten worse, closer to Athens, and the travel ban was going into effect in America, I was 100 percent ready to come home.”

Before she had to leave, Santos was enjoying her two months in Greece.

“It felt like I was in a movie, it was all so surreal,” Santos says. “I met so many friends, it made the experience so much easier.”

The food was “absolutely amazing,” she says, and she missed it whenever she went to one of the three different countries she visited while there. Santos had just one regret:

“The only thing I regret was not visiting the Acropolis/Parthenon when I first got there; I figured I had four months to do it, but because I left so quick I was unable to go,” Santos says. “But every time I was downtown I would just stare at it. Anywhere you were you could just look up and see the Acropolis. It was so cool.”

Santos was able to book a flight with no complications and was home before the end of the week she was told to return.

Both Haley Lucier and Gabriella DeAngelis were studying abroad in Prague, Czech Republic, and were there for almost two months. They were very disappointed to have their time there cut short, though they enjoyed the time they did have.

Lucier had just arrived at an airport after traveling to Amsterdam when she received the email from the program that she needed to return home as soon as possible as the program would no longer continue due to the outbreak.

“It was a complete shock and very disappointing to find out our program was being cancelled, since there had been so much hard work and money put into it through taking summer classes to filling out a multitude of paperwork for my experience to be taken away just like that,” Lucier says.

Though Lucier was disappointed about having to leave, she felt her time in Prague was “absolutely amazing as I had met so many people and had been to five beautiful countries in just under two months,” she says. Though she had a long trip home, she did not encounter any difficulties.

DeAngelis was waiting with her friends in Prague for the email that would call them home after President Trump’s announcement about closing U.S. borders.

“It was about 2 a.m. in Prague and my friends from home called me freaking out,” she says. “They were worried I wouldn’t be able to come home at all and wanted me to get on a plane as fast as possible. It was a crazy weird night and didn’t feel real.”

That morning, the students received the email telling them to return home. “So many tears were shed by everyone,” she says.

DeAngelis had a stressful time trying to return home because of the number of people also trying to get home on the same flights. Even after managing to book a flight with a layover in Russia, DeAngelis was confronted with more difficulties.

“On my first flight from Prague to Russia, I was the only U.S. citizen and I was stopped before getting on the plane and the security told me I may not be allowed in the States,” DeAngelis says. “It was terrifying, but thankfully they let me on.”

Before she was told to return home, DeAngelis was “having the time of my life,” she says. “I met amazing friends and made great memories. My favorite memory was when we saw the sunset at the Louvre in Paris.”

Brianna Fleming ’14 has found a sweet way to say ‘thank you’ to healthcare workers on the frontlines of the COVID-19 pandemic at UMass Memorial Hospital, University Campus. Fleming, a . . .