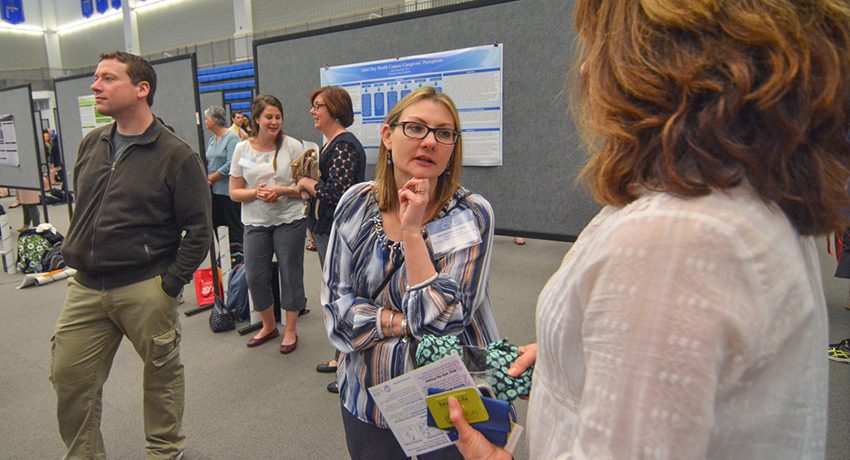 Annual Celebration Showcases a Variety of Student Research and Creativity

When Worcester State University students gather for two hours in the new Wellness Center on Wednesday, April 12 for the 10th annual Celebration of Scholarship and Creativity, it will be the culmination of months—and in a few cases, years—of painstaking research and discovery.

Both Glennys Fuentes and Elizabeth Johnston have been working on their projects since 2015. Each started as a Community Health Improvement Plan research project under the guidance of Dean of the School of Education, Health, and Natural Sciences Linda Larrivee, Ph.D.

Fuentes is a Spanish major who is concentrating in Spanish for the professions and global studies as well as minoring in economics. She developed the content for and designed English- and Spanish-language brochures about building community gardens in the city of Worcester.

“We wanted to focus on the Spanish [-speaking] community so they learn how they can get a community garden so they can make healthy food choices,” she said. “We tried to adapt the steps to Worcester and its climate and its people.”

There is more to translating text from one language to another than simply choosing the right words, Fuentes explained.

“Translation also has to do with keeping the meaning of or the sense of the text in English,” she said. “You have to convey that in Spanish, so it’s kind of challenging. I just tried to make it readable for any Spanish speaker.”

In addition to presenting a poster on the project, Fuentes, who will graduate in May, will have English and Spanish copies of her brochure available.

She hopes the city will find her brochures useful. “Now we have a broader audience, especially in Worcester. The Spanish-speaking community is growing,” she said.

Johnston is a student in WSU’s speech-language pathology graduate program. She developed a professional development presentation for elementary school teachers on language difference and delay.

The CHIPS phase of the project was completed last year. She has continued to work with Assistant Professor of Communication Sciences and Disorders Kirstina Curro, Ph.D., on the research phase.

Johnston’s interest in language acquisition by English language learners stems from her work as an elementary school teacher in Rhode Island. It motivated her to study speech-language pathology.

She examined data from the state Department of Elementary and Secondary Education and found that “there is an extremely high number of English language learner students” in Worcester’s public schools and that they are “being disproportionately over-identified as having a language disorder because teachers are not taught in school about language difference and language delay.”

“Oftentimes, what we’re seeing is English language learners might have trouble with comprehension and production, but that is because they are learning a second language, not because they have a deficit where there is a brain difference,” Johnston explained. “A language difference is when a child has a variation of standard American English,” which is considered “newscaster language.”

That formed the basis of Johnston’s professional development presentation. It reviews the subject of language difference, language delay, and language disorder to show what each looks like and ways they are different. It also includes a case study as well as pre- and post-tests to help her measure results.

In addition to sharing her findings at the Celebration of Scholarship and Creativity, Johnston has applied to Worcester Public Schools for permission to offer the professional development at a school.

Lauren Murphy, who is a senior majoring in biotechnology and minoring in chemistry, has been examining the contents of a fresh apple since the fall.

“We spent a lot of time running samples,” she said. “We made our standards. We tried to put a known amount in there so we had something to compare to an unknown.”

Murphy and her faculty advisor, Assistant Professor of Chemistry Kathleen Murphy, Ph.D., tested the samples using the University’s HPLC, LCMS, and gas chromatography machines. They conducted the final analysis of the apple samples at WPI.

“You may or may not find that pesticide because usually a combination of pesticides is used rather than just one,” she said. “We might just be picking up signals from another pesticide.”

Another senior, Mia Koutoulas, and classmate Daniel Jaillet, will present their research on memes in the presidential election. They decided to examine this issue for the Media Education class they took with Professor of Communication Julie Frechette, Ph.D., last fall. The result was a post on the Global Political Media Literacy Project website and an accompanying presentation titled “Re(meme)bering the 2016 Presidential Election.”

“Politics had been a huge part of our class,” Koutoulas said. They wanted to “think outside the box” for their project, and settled on the election memes because it would be a new topic for the class.

They looked at the rhetoric from politicians leading up to the election and compared it to memes their supporters posted on social media. They also went to the candidates’ accounts to find which memes they had posted on their own profiles.

Koutoulas and Jaillet also attempted to create memes that pointed out candidates’ hypocrisy, based on facts, without alienating anyone.

Their project has the potential to grow into a lesson plan, explained Koutoulas, who will graduate in May.

Engaging young people in politics is one of the positive outcomes she and Jaillet identified, she said. It’s also important to point out memes’ most negative outcome: increasing the sense of polarization in the country.

Beginning at 10 a.m. in the Student Center’s Fallon and Foster Rooms, some students will give oral or panel presentations. The poster session will have more than 100 projects on display and run from 3 to 5 p.m. in the Wellness Center. 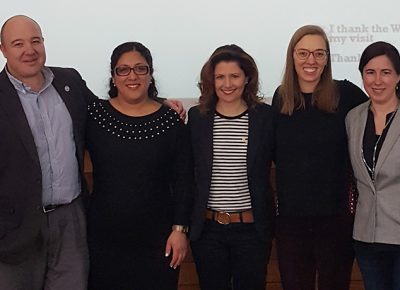