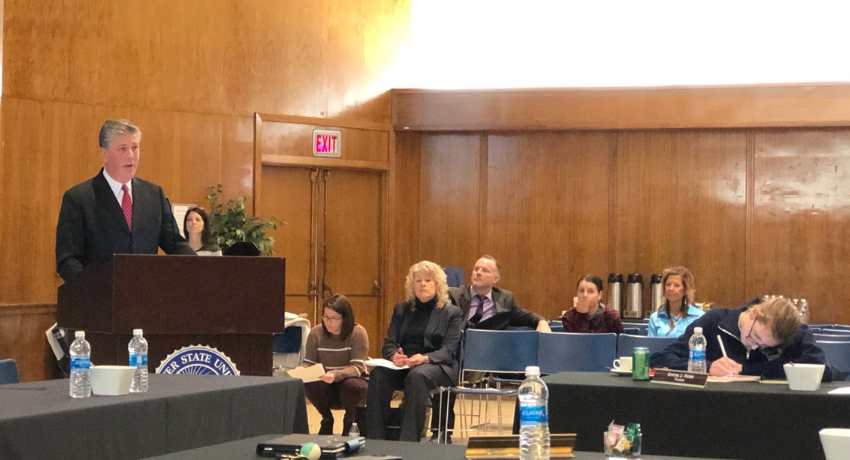 President Barry Maloney presented the comprehensive final report of the 71-member Phase Two work group of the Financial Sustainability Task Force (FSTF) to the Board of Trustees on Tuesday, Dec. 6. While a vote was not taken on the 70 recommendations which were orally presented, the Board asked follow up questions of President Maloney, Vice President for Administration and Finance Kathleen Eichelroth, and others on the Steering Committee charged with reviewing and categorizing the recommendations. The report serves as the framework for the work that is slated to begin after the new year.

President Maloney thanked the campus community serving on Phase Two for their due diligence in fulfilling work group obligations such as data review, interviews with subject-matter experts within divisions/departments, and other tasks necessary for determining the viability of recommendations that emerged from Phase One of the FSTF process. Many Phase Two work groups held sessions with EAB on nationwide best practices and with Dr. William K. Balzer, author of “Lean Higher Education,” whose work on continuous improvement is evident throughout the report.

“The work groups understood the charge before them and the University’s goal of positively impacting our budgeting over the next several fiscal years,” President Maloney stated, citing the aggressive timeline they adhered to and the significant number of recommendations they submitted.

The FSTF Phase Two work groups worked from July 11 through November 10, yielding a thorough set of high-quality recommendations, he said. A total of 70 recommendations were received by the Steering Committee – consisting of the executive sponsor of each work group, other members of Executive Cabinet, and the President. The work groups had recommended 34 of them for short-term implementation and 36 as “future considerations.”  The Steering Committee’s report prioritizes 67 of those proposals by assigning each one of three follow-up pathways based on whether they should be implemented immediately, on a short- or medium-term basis, or as part of the University’s ongoing continuous improvement model.

Two of the remaining three proposals unassigned for FSTF follow up were referred to the University’s executive team and the Worcester State Foundation and the third was referred to the Strategic Plan Review Committee (SPRC), due to their complexity. The first two related to Foundation-owned properties, including the May Street Building, and the one referred to SPRC, proposes a review of the facilities master plan in light of enrollment decline,

Proposals to move the art studios back to the main campus from their current locale at the Worcester Center for Crafts and an early retirement incentive were recommended for further examination on a longer-term basis than the work groups recommended.  President Maloney noted that the current realities of a tight labor market must be taken into account in evaluating the cost-benefits of the proposal.

As for a proposal to further evaluate outsourcing some maintainer positions, the President said that current vacant positions are already accruing savings and that an alternative shift configuration would be explored first rather than outsourcing.

Vice President Eichelroth explained the three follow-up pathways.  Long term work will be implemented via the establishment of Continuous Improvement Council. Immediate work will fall under the CIPP — or Continuous Improvement Pilot Program – and high-priority short- to medium-term recommendations will be worked on by the CIIG or Continuous Improvement Implementation Group. “Much of the work will be an organizational culture change for the institution, but it is necessary in order to make the lasting changes needed to support the Worcester State’s financial sustainability in the coming fiscal years,” President Maloney stated as part of his presentation remarks.

During the meeting, Trustee Will Moseley asked the President about time caps on immediate goals and an interval review process. President Maloney stated, “We will utilize the Finance and Facilities Committee and establish a schedule of meetings, which will be open meetings, as a process for review and validation of the Phase Two recommendations.”  He also said that the next regular meeting of the Board of Trustees will be in March, but the time in between will allow the Finance Committee to engage in the process. Vice President Eichelroth added that “there is some urgency that is needed, which will have immediate impact, and we believe that needs to be done now to have them incorporated into the FY24 budget proposal.” Both noted that the FY24 budget process will incorporate high-priority short-term recommendations of the FSTF.

Student Trustee Emma Polak asked whether adjustments to the recommendations will be made before they are piloted, such as the one related to class sizes, given that spring semester registration has already begun. Provost Wims replied, “We will review every class and evaluate what is needed for students to graduate on time – like we do each semester. However, we will not disturb any current scheduling for the spring 2023 semester.” Vice President Eichelroth added, “the pilot of class sizes will take place in the spring semester, but that continuous process or CI will be evaluated and adjusted with minimal impact this spring.” She continued, stating, “There will be a continuous assessment to ensure the results we’re seeing correspond to the highest and best. Testing of the hypotheses these recommendations represent will be an immediate next step.  We will do that in a way that will not impede any one’s ability to get their job done or degree completion.”

President Maloney spoke about the passage of Question 1 and its relation to FSTF. “We know the Fair-Share Amendment will have an impact on this, but we do not have any criteria about how or when this will be implemented.  We know that higher education has been underfunded for well over a decade, and I will continue to engage with the state around our level on appropriations.  This will run parallel to the FSTF efforts we undertake here on campus.”

Trustee Polak inquired about student involvement in the process, with the President outlining their past and future involvement. “You may recall, the Phase One co-chairs attended Student Senate meetings and met with other student leadership groups to provide an update and overview of the FSTF process. While we had a deeper dive in Phase Two of the Phase One recommendations, our intent was and is to engage students in the next steps of continuous improvement and their reactions to the process.”

Trustee Marina Taylor thanked the faculty that took time away from their regular classes to participate in the process, stating “it speaks volumes to their dedication to the work of Worcester State University,” and thanked the staff for their commitment. 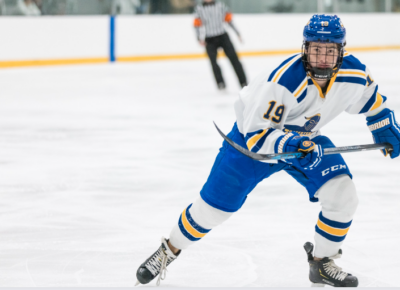 The men’s ice hockey team will play at the DCU Center on Dec. 10, and alumni are invited to join for an afternoon of fun with a reception, alumni hockey game and a Worcester Railers matchup that . . .