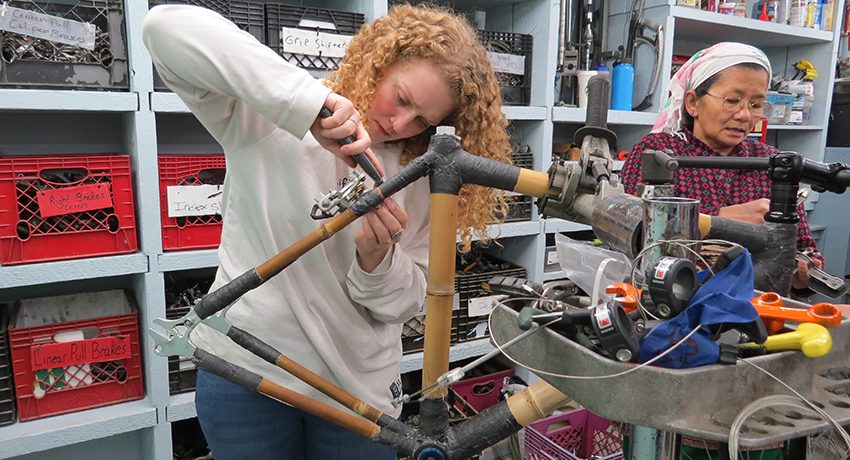 It takes a village to build a bicycle.

A collaborative project to build bicycles out of bamboo took place over three days in January, bringing together intergenerational teams of students, alumni, and local refugee artisans to create reliable transportation out of bamboo, a sustainable and recycled material. The workshops took place at the Worcester Center for Crafts, a WSU partner and location of WSU’s visual arts studios, and at Worcester Earn-A-Bike.

The free project, partially funded from a grant from the Alumni Association’s Advisory Board, is a joint effort among Worcester State’s Urban Action Institute, Sustainability Office, and community groups, including Refugee Artisans of Worcester, Worcester Earn-A-Bike, and Bamboo Bicycles Boston.

The idea for the workshops started at the 2017 Sustainability and Food Day Fair, when representatives from Bamboo Bicycles Boston were invited to share their group’s mission with the campus community. WSU Trustee Maryanne Hammond ’69 then suggested that the University get involved by holding a bike-building workshop.

Founded in 2014 in Beijing, the organization has built more than 400 bamboo bicycles with community groups from all over the world. Members of the Boston branch of the group were the trainers for the workshop to ensure the bikes were assembled correctly and with the proper safety standards.

Each of the four bike-building teams was made up of one or two WSU students, an alumnus, and two community members—one a youth and one an elder—from the Refugee Artisans of Worcester.

“There’s also an intergenerational component to the project, which fits well with the mission of the Urban Action Institute,” said UAI Director Adam Saltsman, Ph.D. “Elder refugee artisans, who often need language support, will be able to work alongside their younger relatives, who can also interpret for them.”

The bike-building process brings communities together in a fun and sustainable way, according to participants. “The bamboo bike workshop was a huge success, not only because we achieved the goal of building a bike in three days, but also because many bonds were formed,” WSU alum Pete Peloquin ’17 said. “A group of people not only created a usable bike, but we also did that with very minimal verbal communication.”

The workshop proved that obstacles can be overcome with time and patience, he said. “My hope for all of us moving forward is to remember this weekend when we encounter an obstacle in life—whether it be a verbal, social, cultural, or knowledge obstacle.”

The bike frames are constructed with sustainably harvested bamboo and recycled parts, including seats, wheels, and handlebars, from bikes donated to Worcester Earn-A-Bike.

The bamboo bikes are lightweight and also surprisingly strong, according to Executive Director of the Worcester Center for Crafts Honee Hess. “Bamboo is forgiving, but it’s very strong, so the bikes are just about as strong as carbon-fiber bikes,” she said.

The project aims to provide transportation in an Earth-friendly way. “The people who are championing these bamboo bicycles are looking at them as a low-cost alternative to the bikes that in the Western world we spend hundreds or thousands of dollars for,” Hess said. “They’re interested in these bikes going to different parts of the world to introduce transportation in a much more low-cost, sustainable way.”

The bamboo frame parts are held together with a strong epoxy. After the epoxy has hardened overnight, it is reinforced with carbon-steel tape. Four bicycles were made over the three-day workshop.

“It was such a great experience to see people from places as far away as Bhutan who now live in Worcester as refugee artists working side by side with students from Worcester State and people from the community,” Hess said. “And then to see them actually build bicycles out of bamboo, that was amazing.” 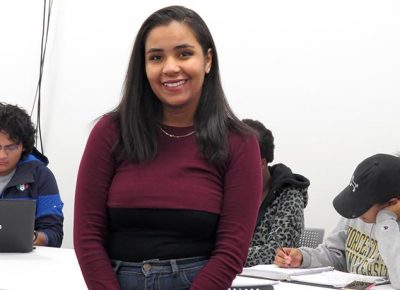 Senior Vanessa Laracuente has made positive contributions to Worcester State University’s campus climate through her involvement with Third World Alliance. She took that to a national level . . .