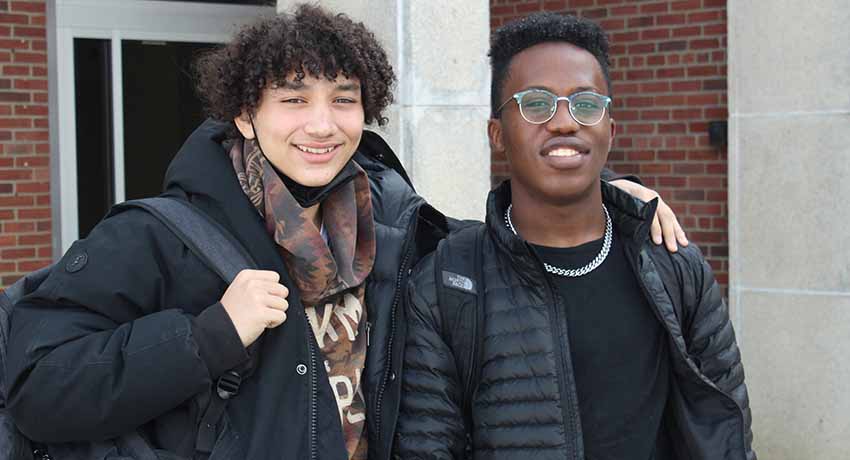 Brotherhood Conference brings young men together to uplift, motivate and set them on college path

Worcester State University’s inaugural Brotherhood Conference offered a day of inspiration, affirmation and connection for nearly 100 first generation, economically diverse, ALANA/BIPOC students from across the state universities and local public schools. For Zyaire Abney, a Leominster High School sophomore, “It was way worth it. It’s been really informative, and I learned some things I had never thought about before that I think will help me with my professional goals.”

The conference’s mission was to uplift and empower young men by affirming their experiences, engaging them in team building workshops, helping them build upon their identity through self-knowledge, and enhancing their connection to a network of successful and supportive men in the greater community who identify as first-generation, ALANA (African, Latino, Asian, Native American) and/or BIPOC (Black, indigenous, people of color). 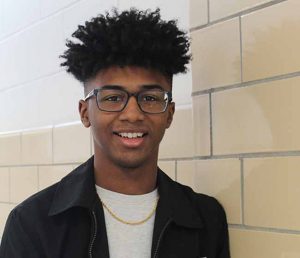 Zyaire Abney, a Leominster High School sophomore was one of nearly 100 students who attended the Brotherhood Conference

“Success for our young men starts with access, inclusivity, visibility, and community,” said Eriberto Mora-Carrera, staff associate in the Office of Multicultural Affairs (OMA), who helped organize the event. “That’s why we decided to hold this conference – to uplift and motivate our brothers.”

The event has its origins in a support group called the Young Men’s Group, started in OMA nine years ago for first generation and/or ALANA/BIPOC students. This year, OMA expanded that vision to launch the Brotherhood Conference for students from across the community.

“Showing up and intentionally affirming our brothers’ narratives is an imperative step towards unapologetically appreciating and acknowledging equity and pluralism as components to increasing graduation rates and heightening the academic success of our first generation and/or ALANA/BIPOC male students,” said OMA Director Laxmi Bissoondial.

A dozen workshops were offered, ranging from “Racial Trauma: Skills and interventions to address racial trauma,” presented by social worker Eric Roland, to “Going to law school and pursuing a law practice,” presented by Attorney Hector Pineiro. Opening keynote speaker, Joseph M. Corazzini ’04,  vice president for government and community affairs at Clark University, encouraged the audience to “know your agency, invest in yourself, and don’t be afraid to take professional advancement risks.”

By mid-morning, Abney – who said it was his mother who encouraged him to attend the Brotherhood Conference – had already attended two workshops, including one on how to jumpstart your career through an internship by presenter Walter Jovel ‘03. “Right now, I go to trade school for graphic design, and I learned about how an internship could lead to a good opportunity for me,” he said.

Bridgewater State University sophomore Patrick Joseph said he got a lot out of the conference. “My reason for coming was simply to find motivation to better myself and acknowledge my path and build a better future for myself,” he said. “It helped a lot – it gave me points I didnt know about and things I can build off of.”

Doherty High freshman Serwah Marfo said she wanted to learn about what she might do when she graduates and the conference gave her tips on how to research career pathways. “I came to gain knowledge about what I might want to do,” she said. 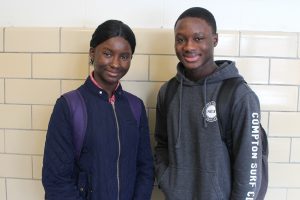 Serwah Marfo, a freshman at Doherty High School, and her brother, Gyasi Marfo, a Doherty junior, were among conference attendees.

The concept for the conference was a response to a call for action to address the retention and attrition rates among first-generation and ALANA/BIPOC high school and college students, especially males. These goals are part of the equity work encouraged by the New Undergraduate Experience, an expansive state initiative aimed at increasing equity in public higher education,  and the WSU Multicultural Programming Committee’s Antiracism work. 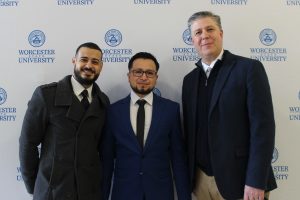 The dropout rates fundamentally reflect a lack of support across different platforms, Mora-Carrera said. “It could be financial, lack of role models or mentors, or not enough funding for expansion for student support programs.”

Programs like Upward Bound, pre-college programs, Alternatives for Individual Development (AID), and Summer Bridge programs are critical for developing skills and transitioning underrepresented students into college and on a pathway to graduation, Mora-Carrera said.

Worcester State graduate Johnny K. Chavez ’13 knows those challenges well. At the beginning of a workshop he presented “From sweats to suits,” he described some of the struggles he experienced in his student days — challenges many students attending the conference also face.

“I was the first in my family to go to college and now my sister is here at Worcester State University. I didn’t know how to do it. I just knew I 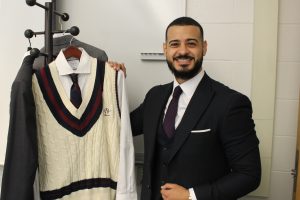 Johnny K. Chavez brought along examples of interview-appropriate attire for his workshop on how to dress for success

needed to do it,” he said. Through persistence, this psychology and Spanish double major worked his way into a rewarding career as a care manager at a local social service agency.  Having the right look for job interviews also played a role, he said, and Chavez offered students tips and tricks on how to dress for success.

Chavez’s workshop, like the conference itself, was mainly focused on men, but females also attended many of the events. Neve Tran, a sophomore at North High in Worcester, said she came because she wanted to explore new areas of interest and thought the workshops might help her expand her horizons. One of the workshops she chose was “Drumming for health and healing: How music helps us to build the best community,” presented by Carlos Odria, assistant professor of music at Worcester State. “I’m not really a musician but I just want to learn more about music,” Tran said. “I like to always learn about new things so I won’t be limited to any one area.” 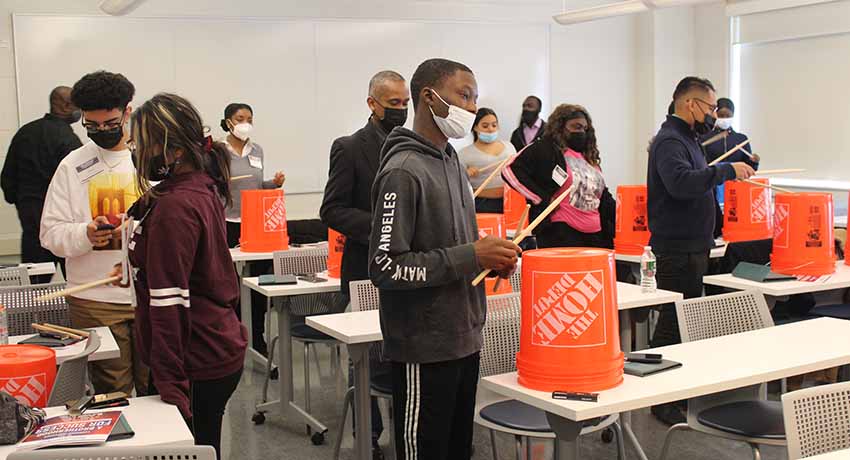 After a discussion of drumming traditions from around the world, wooden drumsticks were handed out. Inverted orange utility buckets served as drums and the students enthusiastically drummed away. They were learning more than just how to make pleasing rhythmic sounds, however.  They also were practicing skills that help in just about any area of life, according to the workshop’s brochure description which explained that “good drumming and good music require teamwork, empathy, and the ability to navigate relationships and everyday tasks in a fluent and positive way.” 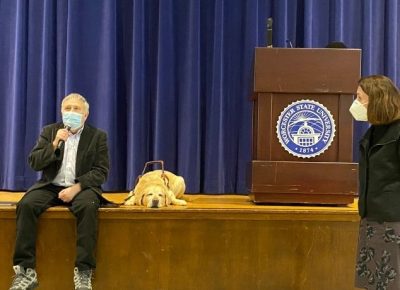 Two weeks after 9/11, Stephen Kuusisto got into a cab in Columbus, Oh., with his guide dog and quickly got the impression that the silent driver didn’t like having a guide dog in his car. Then . . .