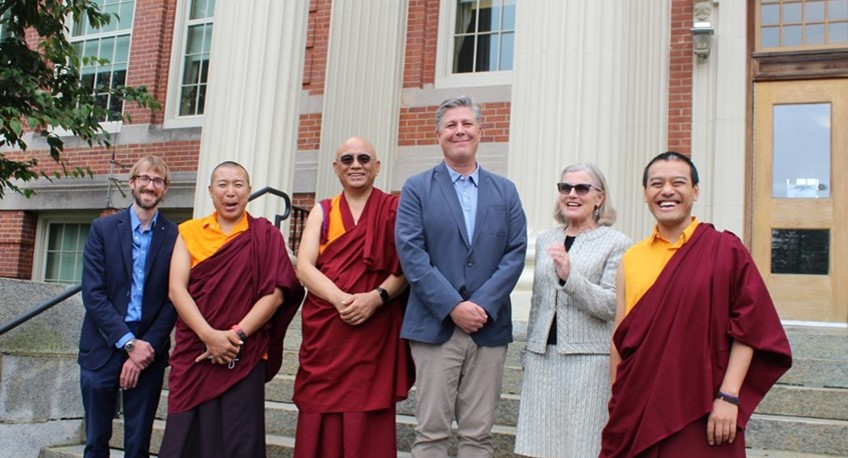 Worcester State University welcomed three Buddhist monks to campus Sept. 20 to 22 for a colorful and engaging cultural exchange. The visit included the ancient Tibetan tradition of creating and then dissolving an intricately designed sand mandala. 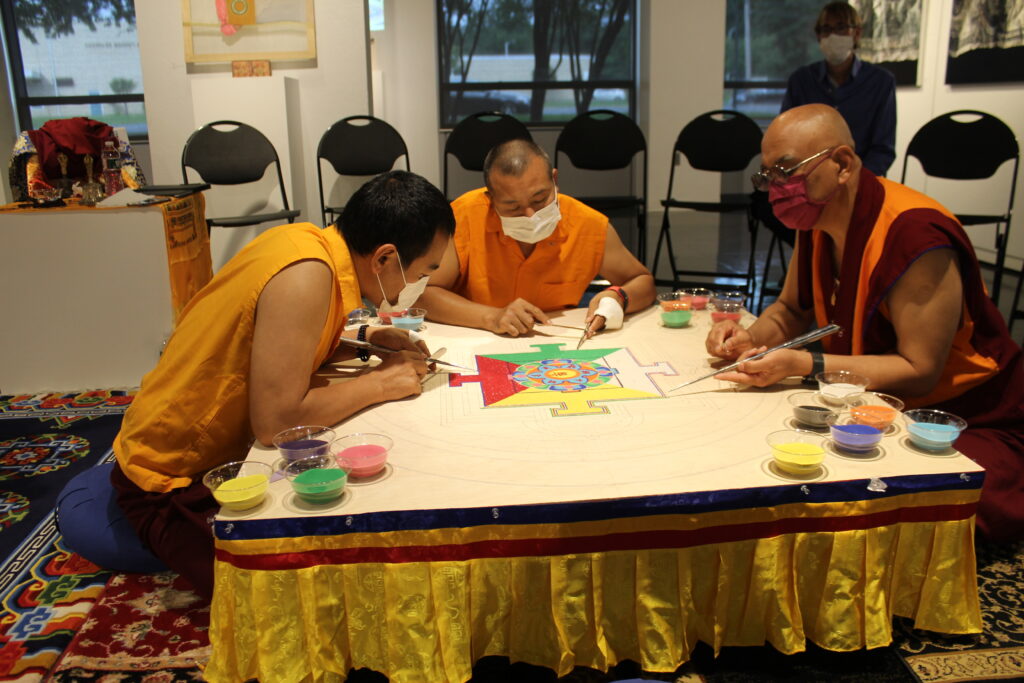 A sand mandala is a vividly colored, geometrically patterned 2-D representation of a 3-D sacred space, made from painstakingly placed lines and small piles of sand.

More than 500 students came to watch the mandala being created, drifting in and out throughout the process. “I think it’s super cool because it’s such a delicate thing and we were able to watch it being constructed,” said Emma Polak ’24. “There was just a flat table and now three days later there’s a beautiful art piece. It was really generous of them to come and not only make artwork but also to educate students at Worcester State about their culture.”

“This is a brilliant lesson on the beauty of patience,” Holly Van Wie ’23 said. “The way each monk is going one grain of sand at a time is almost an analogy for life—that love and patience and dedication will pay off.”

Plans had called for the mandala to be dissolved during a ceremony on the third and final day of the monks’ visit, but a decision was made to leave it up for a weeklong viewing for the Worcester State community.

“In many traditional contexts a sand mandala would remain intact for a week or more before its dissolution, and Khenpo Norgay suggested we leave this one up for an additional week to allow more people the chance to see it,” said Cleve Wiese, Ph.D., associate professor of English, who was instrumental in bringing the monks to campus. The mandala was dissolved Oct. 6 by Dr. Wiese with Khenpo Norgay appearing via Zoom to recite the concluding prayers and direct the ceremony.

The dissolution of the mandala aligns with Buddhist teachings about the transient nature of all things, according to Khenpo Norgay, who gave a talk in the Blue Lounge, one of several lectures and meditations offered by the monks. 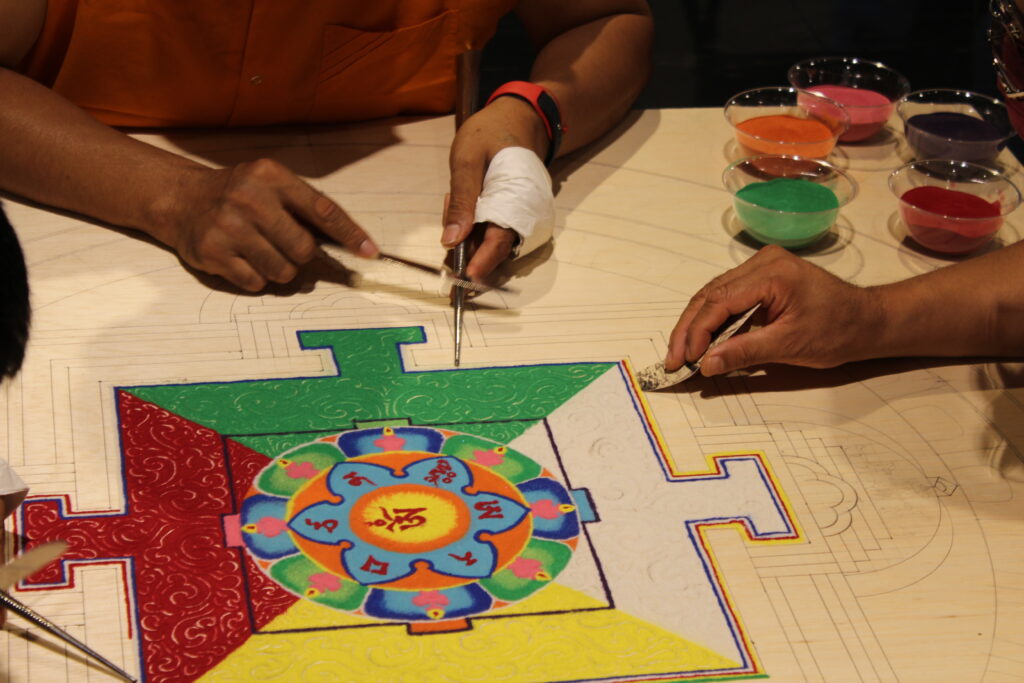 “There are many different methods in Buddhism of finding ourselves, finding our true nature. One of them is the art of mandala,” he said. By creating a beautiful mandala, then destroying it, the monks demonstrate the belief that everything in the world, in its primordial nature, is beautiful but also impermanent.

“Everything changes,” he said. “No matter how hard we try to keep something together, it falls apart. To symbolize that, at the end we will dissolve this.”

If something doesn’t appear beautiful to us, Buddhism teaches that the fault lies in our perception. “Everything in its primordial nature is pure, but, in our minds, things get distorted, and we don’t see things in their pure nature,” he said. “We see things in the way that we are habituated—distorted by our culture, our habitual tendencies, distorted by our emotions.”

The colors and shapes of a mandala, along with the reflection and mantras that accompany its construction, provide a reference point for seekers trying to transcend those limitations and distortions.

“It’s almost like the keyholes that you have in your doors,” he said. “It’s just a small keyhole but if you peek through that keyhole then you are able to see the big house that is through there. All these depictions that we have with all these different colors and different shapes are a way of entering into this vast knowledge, the vast emptiness, the profundity of the truth.”

These monks all come from Namdroling Monastery, which is located in Karnataka, South India, a large Nyingma Monastery that is also home to a prestigious monastic university, or “shedra.” Several years ago, Dr. Wiese led a three-week study abroad trip to Namdroling Monastery for 10 Worcester State students and later hosted a reciprocal exchange program in which four recent graduates from the shedra (two monks and two nuns) came to Worcester State for two weeks of teaching and interaction with students.

Dr. Wiese also is planning to spend part of his sabbatical next semester (spring 2023) at the monastery working on an ongoing project with one of the shedra’s graduates. “I think this mandala event was a continuation of the relationship between WSU and the shedra at Namdroling Monastery, which I hope will develop further in the coming years, including with more study abroad programs to Namdroling Monastery for our students,” he said.

“According to my understanding, Col. Sheehan was particularly supportive of study abroad programs because he wanted students to have wide experiences and acquire a broader worldview,” he said. “In that vein, this sand mandala program related directly to study abroad, given past and planned programs at the monastery in India, but it also provided students who for whatever reason cannot study abroad with an opportunity to participate in something from a different culture and part of the world without leaving campus.” 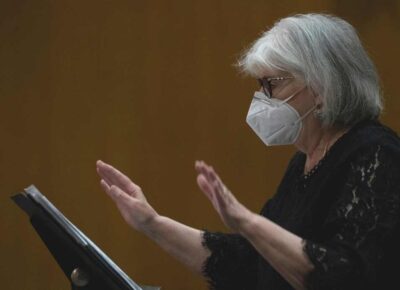 A special tribute event on Oct. 15 will include a live vocal performance, dinner, karaoke, and dancing From Mechanics Hall in Worcester to St. Peter’s Square in Rome with Pope John Paul II in the . . .