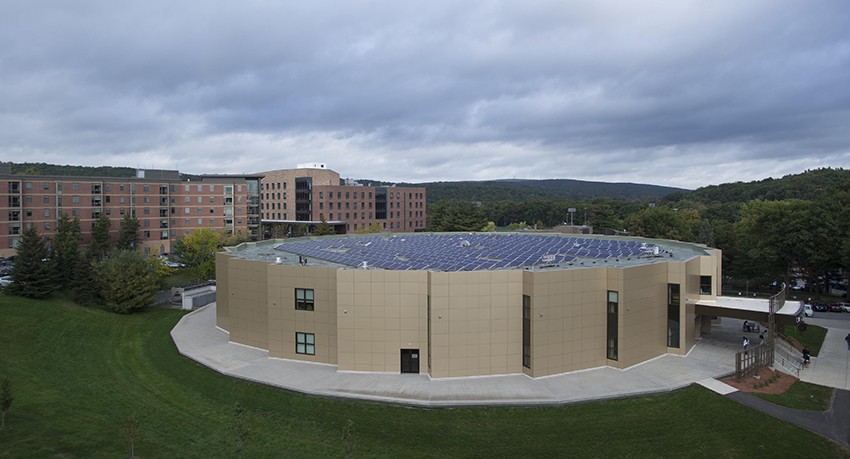 When a light bulb burns out, Bob Daniels reaches for his phone.

“I will not change a light bulb around here unless I talk to someone from National Grid because chances are they’re going to give me something to do that,” Daniels, Worcester State University’s associate director of facilities, said in a recent interview.

The electric company’s incentive programs often help cover the cost of converting older lights to more energy efficient ones, an especially important savings when it was time to replace 539 light fixtures on the third floor of WSU’s Learning Resource Center. That project as well as others—including swapping out thousands of standard bulbs for energy-saving LEDs—are expected to shave about $50,000 off the University’s electric bill each year.

Efficient lighting is one of many cost saving strategies Worcester State is pursuing, several of which have the added benefit of being environmentally sustainable. Beyond belt-tightening in the buildings and grounds sector, initiatives include providing in-house printing and publishing design services for about 98 percent of all work for an annual savings of around $45,000 a year.

A big savings benefit was realized through cost avoidance for this fiscal year of $826,812 by contracting with Massachusetts Higher Education Consortium vendors that offer discounts to members. The MHEC bids and contracts on behalf of nonprofit members in New England. There are hundreds of vendors, most offering discounts such as lower pricing and free shipping to members, according to Brenda Bussey, WSU’s director of procurement and accounts payable.

“By taking advantage of these prearranged contracts, we take advantage of not only the cost avoidance, but the time and efforts associated with bidding ourselves,” Bussey said.

Some budget steps seem incremental until you add up the savings. Use of the Pitney Bowes Presort Extra Postal program allows the University to save just 3 cents per letter, but that translates into an annual savings of $23,000.

Solar panels also play a shining role in keeping costs down. WSU has taken advantage of net metering credits, an incentive program that stands to trim about $500,000 off its energy bill by tapping into solar sources.

Steven Bandarra, WSU’s sustainability coordinator, gave this explanation of how net metering credits work: Private developers put up huge solar arrays in open areas. You’ve probably seen the panel-covered fields by the side of the highway and elsewhere. National Grid is obligated to accept any electricity generated by the arrays, but it is not required to pay the developers any money. Instead, they give the developers credits.

“So you’re a solar developer, you’ve got this gigantic array, and you’ve got all these credits that you want to turn into money,” Bandarra said. “So you have to go somewhere to somebody and say, ‘I have all these credits. Will you buy them from me, please?’ And to incentivize that, I’ll give you these credits at a discount.”

As an example, a developer might sell $100,000 worth of credits for $70,000, Daniels said. The credits are then applied to WSU’s utility bill. “It’s substantial,” he said, of the resulting half-million-dollar total savings. “We spend over $2 million a year here on electricity and natural gas, so we look for anything that can help whittle that down.”

Plans also call for replacing outdoor lights with more efficient ones, a move that can mean exchanging a 1,000-watt light for a 200-watt LED bulb offering the same degree of brightness. The replacement schedule is very flexible, however, unless a light is out and needs immediate replacement.

“It’s usually whenever we can scrounge up the money to do it,” Daniels said. “I’m a big fan of ‘How do you eat an elephant? You eat it one bite at a time,’ because if you’re an all or nothing person, you get nothing done. You see what you have for funds, and then you see what makes sense at the time.”

Worcester State saves not only on electricity, but also on the bulbs and fixtures themselves through grants and subsidies. Indoor bulbs often can be acquired for as little as a dollar each and sometimes for free, Bandarra said. “We wait and we watch. Then when they get to the right price point for us, we jump on it.”

The new Wellness Center is being built with a variety of cost-saving components, several of which also are very innovative and environmentally friendly. An $85,000 grant from the Clean Energy Center offset the cost of solar panels, which will take care of 30 to 40 percent of the hot water demand for the center after it opens in June. Also, rainwater will be collected from the center’s roof and stored in a 20,000-gallon underground tank. It will be used to water the grass and plants around the Wellness Center and nearby areas.

Students also have become involved in initiatives that help trim costs while instilling sustainability principles. “Ditch the Dumpster” is a program that Bandarra oversees that asks students to donate usable items at dorm move-out time rather than tossing them in the trash. The items either go to charity, are reissued to someone on campus who needs them, or are put into a campus yard sale in the fall. “We’re able to take 17 to 19 percent of the waste that would have gone into the Dumpster and it stays out of the landfill,” Bandarra said.

Savings on “Ditch the Dumpster” disposal costs come to about $300 each year, while the yard sale netted $1,200 last year. Yard-sale proceeds are used to buy hydration stations, from which reusable water bottles can be easily refilled. So far, four of the stations costing about $800 each have been installed around campus.
“It’s just a way to spend the money by reinvesting it into a sustainability initiative,” Daniels said. “We’re trying to promote getting rid of the plastic water bottles.”

Students also benefit by being able to buy dorm items—including TVs, microwaves, Swiffers, rugs, books, and lots of lamps—for prices ranging from $1 to $5 each.

“It’s good stuff. Their parents paid good money for it,” Daniels said. “We stockpile stuff at the move-out in the middle of May, then put it in storage. They’ll go through it and clean it up with student involvement. It’s all student-run. And then they’ll pull it out for move-in day at the end of August, and they’ll go shopping.” 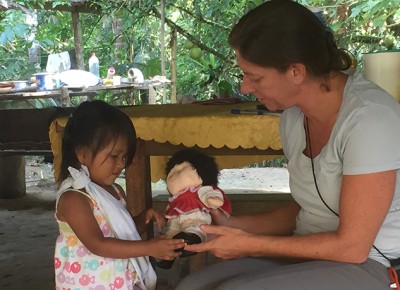 Worcester State University recently signed a memorandum of understanding with the Kichwa Community of Sarayaku, Ecuador that establishes a partnership in which interested WSU faculty will collaborate . . .