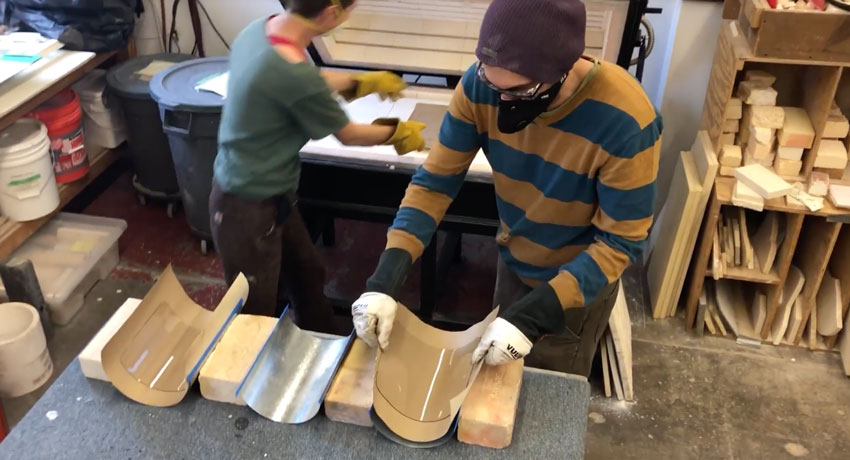 The Worcester Center for Crafts at Worcester State University has found a warm way to turn crafting into caring. The Center’s New Street Glass Studio, with furnaces and kilns usually devoted to artistic undertakings, has been making face shields to protect front-line health care workers during the COVID-19 epidemic.

The shields help fill a dangerous shortage of personal protective equipment needed to keep health workers safe as they care for patients infected with the highly contagious virus. New Street joins a growing group of artists in Worcester and throughout Massachusetts who have converted their art-making spaces into face-shield production areas.

Gale Scott, glass department head at the Craft Center, says it’s a way for artists to contribute rather than just standing by and watching the devastation of the epidemic unfold.

“In these times, being an artist can feel sort of selfish and you wish you could be more helpful,” he says. “But on the other hand, artists are problem solvers, and we are not married to a specific production type or a specific material. We work with lots of different materials, so we’re able to adapt. We started making these with very little change to equipment or anything. Places like the Worcester Center for Crafts are well suited to figure out really quickly how to do things like this.”

The face shields are being delivered to three Worcester locations: Saint Vincent Hospital, the Edward M. Kennedy Community Health Center, and Vital Emergency Services, an ambulance company. The Craft Center is coordinating its efforts with other local artists and makerspaces, including Technocopia, Ferromorphics Blacksmithing, The WorcShop, and Cotyledon Farms.

“This is great work being done by great people,” says Elaine McKenna-Yeaw, Craft Center executive director. “I am so pleased that our artists and makers have put their skills and talents to use, providing our community of first responders and medical staff a layer of safety, while they bravely do the hard work of caring for the sick.”

There are readily available designs for groups who want to work on face-shield projects, Scott says. The design New Street is using was started in the Boston area by the Charlestown Face-Shield Project, where protective equipment is being made in a performing arts space that has been sidelined by the pandemic. There is also a Facebook group called Covid-19 Open Source Medical Supplies, where people are working on designs that they share so others can make medically approved shields.

A Worcester face-shield group, formed by local artists, is working with 3D printer versions.  At New Street, they’re using pre-cut polycarbonate plastic. “We can make ours a lot faster to produce because we don’t have to wait for the 3D printer,” Scott says.

The face shields, although made according to a medically approved design, are probably best suited for nursing homes and EMT workers rather than, say, a hospital ICU which sees the sickest patients, Scott says. But the need for PPE is so enormous that workers in just about any health-care situation would be pleased to have them.  “My sister-in-law is an ER nurse in Houston and she wants some,” Scott says. “Like so many other places, they’re desperate.”

To make the shields, New Street is repurposing kilns that are designed for slumping glass, a process that warms sheet glass so it can be formed in a mold.

“It’s only going in there at 330 degrees for about three-and-a-half minutes,” Scott says. “That’s all it takes to heat up the polycarbonate plastic enough to get it to drop into the forms that we have.”

Earlier efforts elsewhere involved forming the shields in a conventional oven. “They could do one at a time, and it took five or six minutes to do one mask,” he says. “Right now, we’re doing five at a time, and I’m trying to get it up to seven or eight at a time.”

That increased production capability has led to a new challenge. “Before, the bottleneck was they couldn’t form them fast enough with one oven, so now that we’re helping, we can form 40 an hour now,” Scott says. “We’re working on trying to ramp up the assembly, because that’s become the new bottleneck.”

Once the plastic part is formed, the shields need to be attached to a piece of foam with elastic banding so that it can stay in place and fit somewhat comfortably. “We’ve been trying to think of creative ways to get some more hands working on these with minimal risk to people,” Scott says. “We’re considering maybe producing kits that we can drop off for people who can commit to assembling them at home.”

The challenges, problem solving, and production work help Scott deal with the virus-stemming shutdown and the awful headlines the pandemic engenders, which seem to only get worse every day.

“A lot of us are going stir-crazy right now, so it’s just nice to get out of the house and be able to do something like this that’s going to help,” he says. 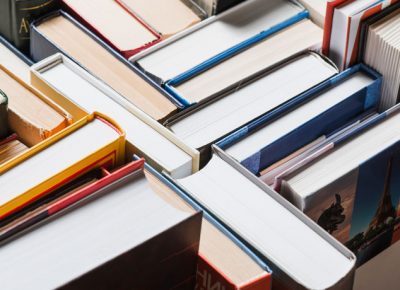 Since 2016, Worcester State’s Open Educational Resource (OER) Initiative has saved over $157,000 for more than 3,000 WSU students who were able to reduce the total cost of their textbooks, and in . . .