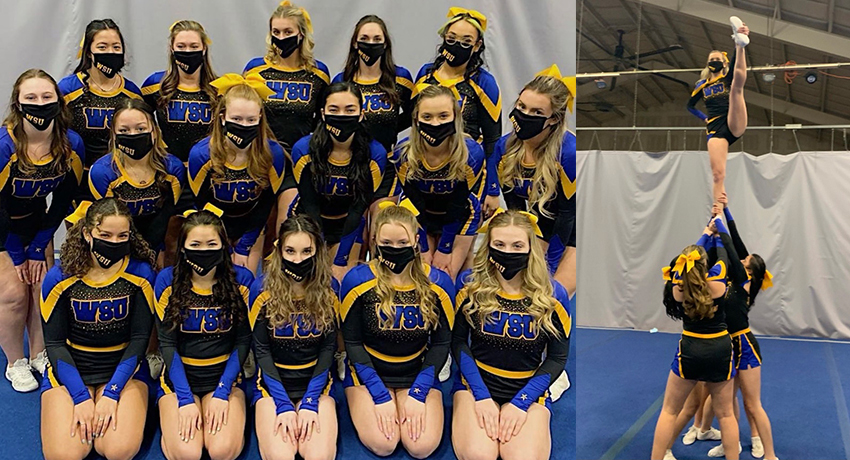 The Worcester State Cheer Team defeated Rochester Institute of Technology 90.55 to 88.13 to claim the Intermediate All-Girl Division III title at the 2021 National Cheer Association (NCA) Championship on Saturday, April 10. This is the first time Worcester State has participated in the competition, which is the largest national stage for college cheerleading.

The NCA Championship is usually an in-person event held annually in Daytona Beach, Fla. Due to the pandemic, the NCA created a virtual means of competing in addition to those who could travel. Teams competed by submitting videos of their routines that were then judged by NCA officials, who assessed specific techniques like pyramids and tosses, as well as the overall choreography.

After not being able to practice at all during the fall, and continuing to social distance during the early winter, the team only began preparing its competition routine during the final week of February. According to team captain Josie Lopez ‘21, a communications major, “There was a point where we didn’t know if we were even going to have a season. We had to fight to keep our season alive. Usually, routines take almost an entire season to learn, but the girls on the team were super committed to getting the win.”

Besides only having a month to perfect their routine, competing virtually presented other obstacles that the team did not expect. While the competition did not require a new approach to how they choreographed their routine, being able to practice their routine as many times as they wished was both a blessing and a curse.

Founder and former president of the cheer team Olivia Petrucci, a graduate student majoring in occupational therapy, says, “We couldn’t rely on the extrinsic motivation from the crowd––it had to be intrinsic. In a live competition, you use the crowd’s energy to perform and execute with your one chance. Despite getting multiple chances to record our routine, it only got harder as fatigue set in.”

Petrucci founded the University’s cheer program as a freshman in 2016, and dedicated her undergraduate career to building it up. Usually graduate students are unable to participate in athletics, but due to the pandemic cutting short her senior season, the University made an exception and allowed her to rejoin the team this year.

“Coming back was something I didn’t anticipate,” Petrucci admits. “This team has always felt like a family to me, and has been a family for these girls. To turn our season around in such a short period of time and ultimately win the title is indicative of our bond and determination as a team.”

Mori Boudreau, the cheer team’s coach for the past four seasons, could not be more proud of the team and their perseverance. In years past, the team participated in local competitions and small national events, but have never been able to go to the NCA competition.

“It has been our goal to work up to this event and be named champions since our first year together,” Voyer says. “This was more than just making a name for the cheer program; they wanted people to start recognizing Worcester State as a whole and to choose them over other schools.”

With the season over, the team has their eyes already set on next year’s competition to defend its title and to, hopefully, do so in person, down in Daytona Beach. 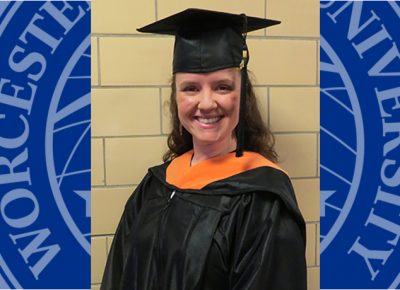 Nicole Collins, M.S. ’21, R.N., comes from a family of teachers—her mother taught high school for 35 years—so she naturally grew up considering a career in education. But after deciding to major in nursing at Salve Regina University, she fell in love with a profession that helps people in a different way. Still, the teaching bug never quite went away. Inspired by the nurse . . .