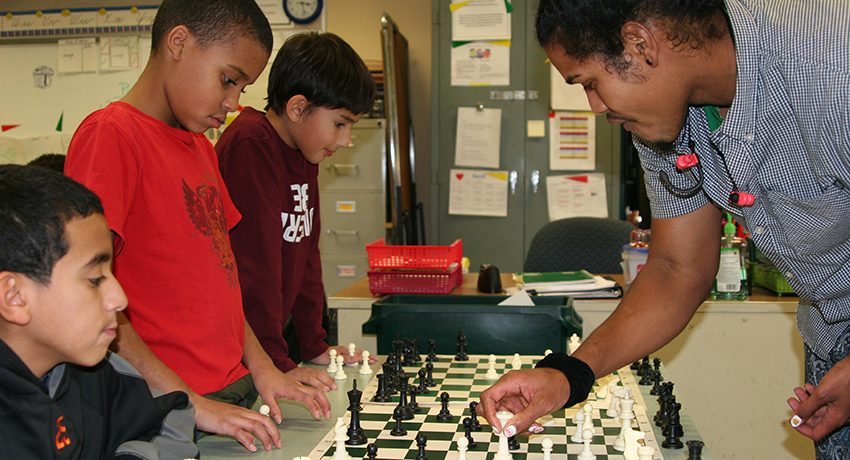 One of the secrets to the success of the WSU Civic Corps is how often local community service opportunities align perfectly with participating students’ interests and career goals. It also shows students the many ways they can be engaged citizens.

The Civic Corps, run by the Honorable John J. Binienda Center for Civic Engagement, connects students with service-learning and volunteer opportunities in the local community as well as with national and international organizations.

Spreading the Love for Chess

For senior Diallo Frys, being a Civic Corps member allowed him to combine his passion for chess with teaching Worcester elementary school students how to play the game.

Frys, a dual business administration and psychology major, became a self-taught chess player as a student at University Park Campus School. “I was always one of the kids who ended up going to school early,” he recalls. “One day, someone grabbed the chess set” sitting idly in a corner of the classroom. “Then we started learning, teaching ourselves every single morning for pretty much the whole year of school.”

He didn’t play as much in high school, and it would have continued to be a casual pastime were it not for walking by the Worcester State Chess Club’s table at Homecoming in 2016.

The club’s president was running a chess contest. “You had to do three specific maneuvers to get him in checkmate, which I failed,” Frys says. But the president admired how he played and asked if he would come to a Chess Club meeting. “It got me thinking about playing chess, so I ended up checking out the Chess Club. I ended up becoming treasurer. Then I just stayed with it.” Now, he is the club president.

Frys’ involvement in the Civic Corps began in the 2017 spring semester when he was asked to help run chess games for Recreation Worcester at Chandler Magnet School’s after-school program.

He switched to assisting with the chess program at City View Discovery School in the 2017 fall semester. “Each quarter, I get a new set of 18 to 20 kids in the classroom,” Frys explains. The students take turns playing against him. “I take on six at the same time to give them a goal.”

This semester, he will continue volunteering at City View.

Sophomore Maribel Mateo’s involvement with Civic Corps began as a continuation of her volunteer service with Jumpstart College Corps. This is her second year volunteering at one of Worcester’s Head Start schools. “Last year, I was in Mill Swan B, and this year I’m in Mill Swan A,” she says.

The opportunity to join Jumpstart “found me in a sense,” Mateo says. “I’ve always wanted to work with children.”

Mateo learned about the organization when she bumped into Binienda Center Director Mark Wagner during a visit to campus the summer before her first semester. She asked him for directions to the bookstore and they struck up a conversation.

“He asked about my interests, and that’s how he brought up Jumpstart,” she says. He went so far as to show Mateo the Jumpstart office on campus and introduce her to the staff. “It’s a nice environment to know that everyone knows each other,” she adds.

She ended up joining the Community Leadership Experience at Worcester State (CLEWS) as well as signing up as a Jumpstart College Corps member.

While she loves working with the Head Start preschoolers at Mill Swan, Mateo says that her most memorable role with Jumpstart was being part of a group that met with President Barry Maloney to talk about a proposal for WSU students who volunteer as Jumpstart College Corps to earn course credit.

“I probably won’t be in the program for that, but I was proud of being able to be a part of that committee,” she says.

Next year, Mateo plans to volunteer for the Reyes House program. Its mission of helping Latino men who have been in jail and/or are recovering from the disease of addiction will relate more closely to her dual majors in criminal justice and sociology.

When junior Nana Darkwa joined the Civic Corps last summer, she was asked to be Worcester State’s first student ambassador to the Edward M. Kennedy Institute for the United States Senate. It was the perfect assignment as she is majoring in sociology and minoring in political science. Her work supports that of our first faculty fellow to the institute, Anthony Dell’Aera.

“My job as ambassador is to do local outreach to Worcester County schools,” she explains. She works with advanced placement history and United States government teachers to enhance their courses with a trip to the Kennedy Institute.

Once at the institute, high school students are randomly assigned a senator for a model session of the U.S. Senate. “Everything is by the book, like how it happens down in D.C.,” Darkwa says. “It’s really spectacular. It’s so fun.”
The students spend the second half of the day debating a pre-selected topic, which Darkwa helps the teacher choose. “We think about what they’re doing in class that the students will be engaged in and understand and have some background knowledge about,” she says. So far, debates have been held on the Electoral College and the Deferred Action for Childhood Arrivals (DACA) program.

“Most of the teachers that I talk to have already had plans to go, but the extra help from Worcester State students is what pushes them to actually want to go again or for the first time,” Darkwa says. “They like having us there because the kids look up to older students to see what they’re doing in college.”

Although this is Worcester State’s pilot year in the Kennedy Institute faculty fellow and student ambassador program, Darkwa and Dell’Aera “are trying to do as much as possible,” she says.

For instance, “We’re planning a certificate program in the summer that focuses on civic engagement and the Kennedy legacy. We want to launch it by the end of the school year in May,” Darkwa says. Worcester State will run the course, and it will use resources at the Kennedy Institute, JFK Library, and the Kennedy family’s Hyannis Compound.

They also are planning a fundraiser with the institute for transportation, which hinders many school districts from sending classes to take advantage of the programming, she explains.

Darkwa is undaunted by the amount of work and commitment involved in getting the Kennedy Institute’s student ambassador role off the ground. “I feel like I’m good under pressure, so it just feels natural for me,” she says.

She likes it so much she plans to continue serving as the institute’s student ambassador next year.

This is the third year of the Civic Corps program. To date, nearly 40 students have been members. 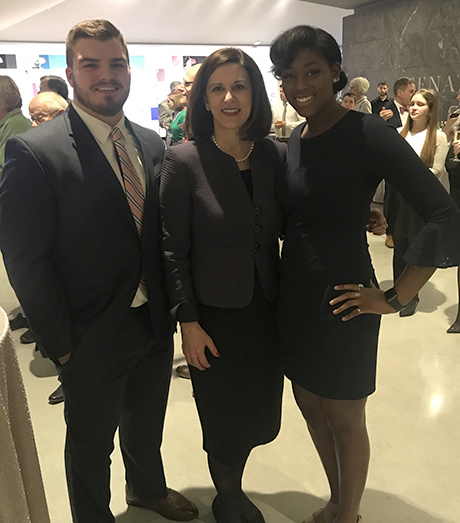 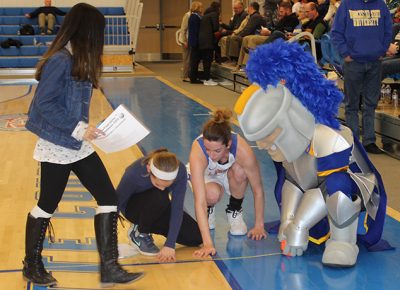 The Worcester State University women’s basketball team hosted its 10th annual “Math Madness” game inside the Lancer gymnasium on Monday, January 8. "We always are very excited to host this . . .