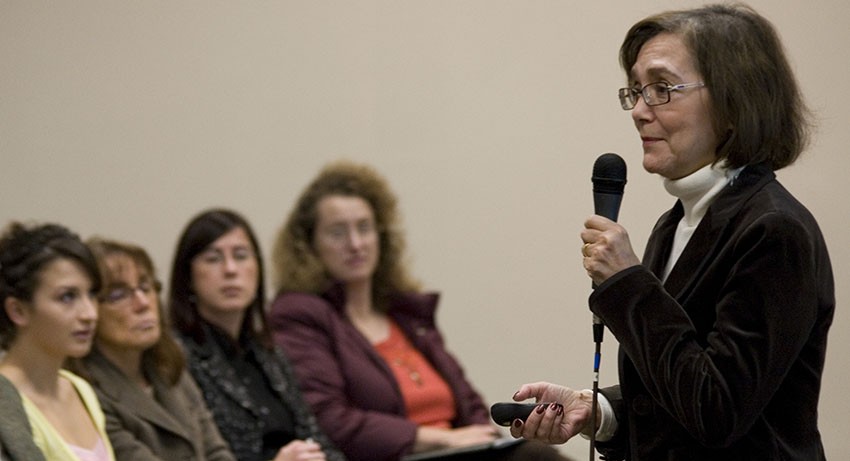 Mainstream media and film do not accurately portray the Latino community, according to Dr. Clara E. Rodriguez, professor of sociology at Fordham University’s College at Lincoln Center. She addressed a standing-room only crowd of students, faculty and staff in the North-South Auditorium Thursday, November 20.

Research indicates that in 2005, of 67 prime time television programs that were examined, only 3.5 percent of the characters were Latino. This, despite the fact that Latinos made up 12.5 percent of the population at the time.

Despite this significant growth, she says Latinos continue to be under represented in the media, even in news coverage. The National Association of Hispanic Journalists (NAHJ) tracked 16,000 news stories and found that less than one percent were exclusively about Latinos and that in non-Latino stories only about 1.7 percent quoted Latinos.

She also said that television and film tends to portray Latinos as “lazy, verbally aggressive and less intelligent.” She said another common stereotype is that most Latino characters are portrayed as living in poverty, while 22 percent of Latinos live in poverty.

The talk was sponsored by the Office of Diversity, Third World Alliance, Languages and Literature Department, History Department and the Latino Education Institute. Rodriguez is the author of ten books including Heroes, Lovers and Others; Changing Race: Latinos, The Census and the History of Ethnicity in the United States; Hispanics in the Labor Force: Issues and Policies; Puerto Ricans: Born in the USA, and Latin Looks: Images of Latinas and Latinos in the U.S. Media. She has been a visiting professor at Columbia University, MIT and Yale University. She has also been a consultant to a number of television shows and documentaries, most recently, “Dora, the Explorer” and “Sesame Street,” and is a member of the National Council of La Raza Board of Directors.