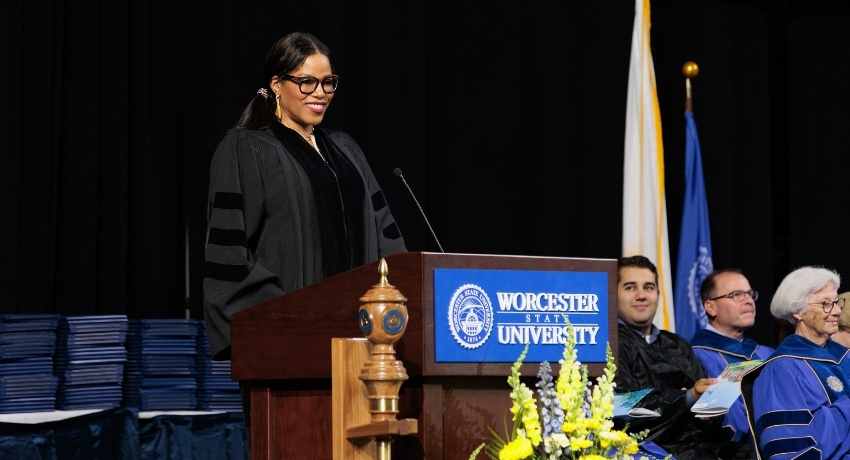 University awards 1,146 baccalaureate degrees in its return to in-person graduation

At Worcester State University’s first in-person commencement ceremony in two years, keynote speaker Ilyasah Shabazz, daughter of civil rights icon Malcolm X and Dr. Betty Shabazz, pointed to education, historical truth and collective effort as the tools needed to combat racial injustice and create change. She urged the 1,146 members of the Class of 2022 to prepare themselves to be advocates for the underserved.

“Malcolm X was ready for the moment,” she said. “He spent years preparing, morally and intellectually, to become an advocate for the underserved. And my hope for you, Class of 2022, is that you leverage your formative years at Worcester State University to become advocates for the voiceless, and stand for those who cannot stand for themselves. You never know what the future will hold, but you must be ready for your moment. Because, when that moment arrives, and it will, you must stay focused on who you’re fighting for – and not what you’re fighting against.”

A celebrated author, producer and educator, Shabazz was chosen as the speaker for the 146th commencement on Saturday, May 14, by the senior class committee from a list of approved speakers presented to the Board of Trustees. During the ceremony, she was awarded a Worcester State University Honorary Doctor of Humane Letters degree in recognition of her contributions to public service, the arts, social justice and education. In her address, Shabazz credited her mother – who earned a Ph.D. at UMass – for showing her that education is the most powerful tool to combat systemic racism. Shabazz followed in her footsteps to become an educator as well.

“At one time or another, whether out of fear or believing it’s not our responsibility, we have allowed injustice to perpetuate in the world around us,” she said. “But I believe education – the good, the bad and the ugly – is the key to being woke to those very injustices.”

In college, Shabazz said, she began to learn about the inaccurate portrayals of her father’s life. Her mother had protected her six daughters from these inaccuracies, and also ensured her children received a quality education. Shabazz learned about the contributions made by women, the continent of Africa, the Diaspora, Indigenous peoples, First Nations and Islam.

“Imagine if, in World History class, students learned that Africa was the cradle of the most advanced civilizations,” Shabazz said. “Consider the kingdoms of Egypt, Ethiopia and Mali. If students were taught about Egypt and Ethiopia in the same manner they have been taught about ancient Greece and Rome, we might better appreciate the beauty and magnificence of civilizations in Africa, Asia and Latin America. We might better appreciate the significant contributions of First World Nations. We would be well informed that the African continent serves as the foundation of our common humanity.”

To growing applause, she spoke of the need to bring truth to the teaching of history in classrooms everywhere.

Her father, she noted, was a visionary who brought a human rights agenda to the Civil Rights movement. “He simply insisted that America live up to her promise of liberty and justice for all,” Shabazz said. “In the 1950s, as young demonstrators and protesters sought civil rights, my father came along and said, ‘We demand our human rights as your brother. We demand our human rights, as ordained by God. We are your fellow brother, we are not asking for permission to be human; our humanity is ordained by God.’”

Citing Dr. Martin Luther King’s famous quote: “The arc of the moral universe is long, but it bends toward justice,” Shabazz said her father reminded us that the arc of justice won’t bend on its own. Rather, it requires individual and collective action.

Only by working together will it be possible to address the wounds of corruption and oppression in our communities, Shabazz said.

“We must work together, pray together, walk together, and stand together. We must continuously seek to support one another and find our way forward – together,” she said.

When we bear witness, choosing community over chaos – we will be empowered by the truth: That each of us is a beautiful creation, destined to shine our light for the greater good. “

Class of 2022: Resilience, change and community 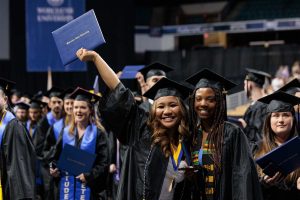 Worcester State University awarded 1,146 baccalaureate degrees at its 146th commencement on Saturday, May 14 at the DCU Center.

In the senior class address, Chair of the Class of 2022 Jacob Labonte praised his classmates for their strength and resilience. The global pandemic, Labonte said, brought hard lessons and change for many. Labonte urged classmates to reconsider the question “What do you want to do?” and instead focus on “Who do you want to be?”

“Inevitably, who you decide to be will be significantly more important than what you choose to do.” Labonte said. “So before we move on to our next steps, I challenge you all to ask yourselves, “Who do you want to be?” and to be adaptable and open to changes and new possibilities.”

President Barry Maloney echoed the theme of change and adaptability in his commencement remarks. “If anyone had told me decades ago, when I walked across a commencement stage to receive my degree at UMaine, that I’d one day be on stage handing out diplomas, I never would have believed them.”

The lessons of the global pandemic, were not easy, Maloney said, and many took significant risks to help others – from Worcester’s nursing students to its faculty members and the Latino Education Institute’s Health Ambassadors, who were recently lauded by the city of Worcester and the CDC for their critically important community outreach efforts.

“I recognize now that I was privileged to have served as president of Worcester State University these past two years – because it allowed me to see the many ways we have come together as a community.” 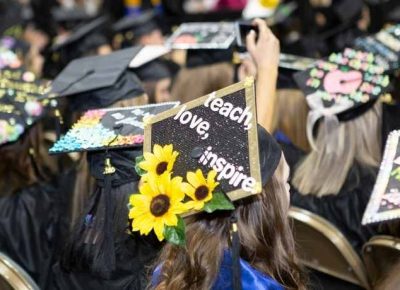