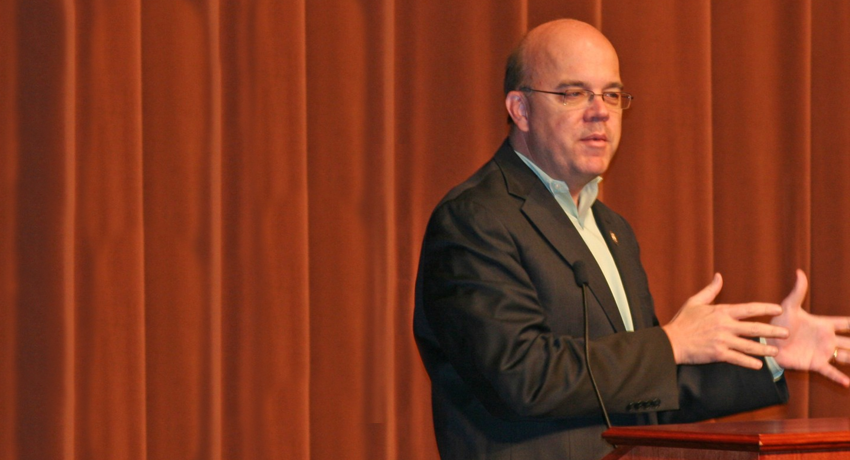 Offering an analysis of the recent election, as well as his thoughts about the debate in Washington in the coming years, Congressman Jim McGovern spoke to a diverse and receptive audience at WSU’s Fuller Theater on November 21.

Saying he was “proud and happy” about the election of Barack Obama and Elizabeth Warren, Congressman McGovern was blunt about the Republican challenge.

“The ideology of Mitt Romney is an ideology we have moved passed,” he said. Among other problems, “it’s a narrative that diminishes the struggles of poor people.”

At the same time, McGovern acknowledged that government programs are not perfect. We need to crack down on abuse and corruption, but we “should be proud that we’re trying to help people out.”

McGovern said he felt that the Warren-Brown campaign came down to substance. He thanked the crowd for helping in that campaign in the Worcester area. He added that he hopes President Obama shows more fire in the coming years.

Questions McGovern fielded from the audience dealt with education, the national debt, and how congress functions. In addition, a young student from Congo asked a question about America’s foreign policy in Africa. The poignant question suggested that certain African initiatives are being blocked in the United Nations. While not an expert on Africa, McGovern reiterated his support of self-determination among peoples.

“Governments of mass corruption and human rights violations” pose problems in Africa, he said. At the same time, he supports these societies moving toward self-determination.

In answering questions, McGovern also reiterated his view that national security and education are linked.

He also spoke about money in politics, a subject he returned to a number of times during his appearance. “Someone who wants to run for Congress, who thinks he could do a good job, should not have to have $200,000 in the bank,” he said.

McGovern’s support for campaign finance reform includes expressed interest in public financing of elections. He noted the Supreme Court’s controversial ruling in the Citizen’s United case, and he imagined a time when the Supreme Court would overturn that ruling.

He noted that many corporations have “skin in the game” in politics, when in fact Congress should close corporate loopholes to make the tax policy fairer for all. The combination of money in politics may be one of the ways in which the debate in Washington is perplexing. Humbly, he noted at one point, “Perhaps I am one of the folks who hasn’t done a good enough job of reminding people of the vitality of the government.”

In closing, McGovern returned to some of the key points of his opening remarks. In particular, the nation’s understanding and definition of national security needs to change. “If China had a military base in Connecticut, we’d be upset . . . Let’s close some of those military bases,” he said.

He sees issues such as jobs, a clean environment, and education as key components of national security policy, a policy we should all be involved with. If we borrow money to pay for wars, only the soldiers and their families are involved, he noted.

Citing statistics that many Americans did not consider Afghanistan a pressing issue, McGovern ended on a hopeful note: He believes the people have rights and that we can reshape the debate in Washington.

“What’s being offered is this idea that we need to increase the military. Combine that with the debt we have, then the logic is that we have to cut other programs,” he said.

The demonization of government and the war on poor people is wrong headed, McGovern added. “Taxing a rich guy is not the same as asking someone on food stamps to give up some of the their benefits,” he said.

Still, he is hopeful that in the coming years we can return the debate toward issues that affect the quality of our lives.

On Monday, November 12, a water main break under Chandler Street caused flooding to the front of campus and the Ghosh Science and Technology Building. As a result, the University was shut down . . .