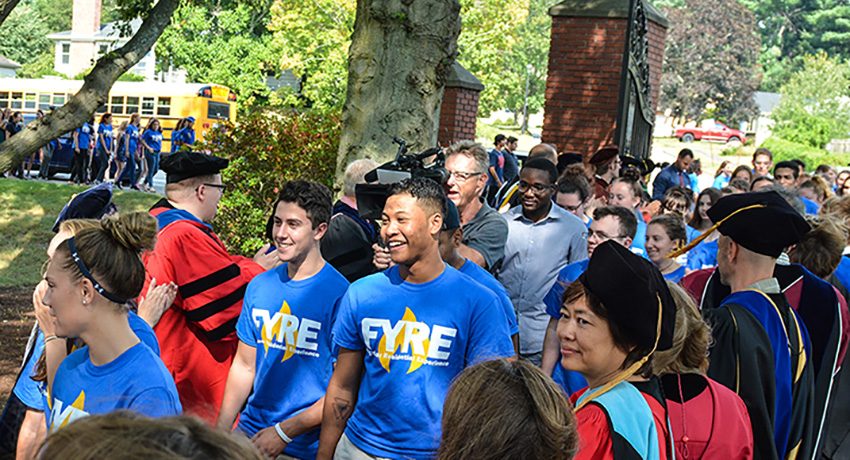 The concept of a New-Student Welcome Was Revived in 2015

In what is fast becoming a favorite tradition at Worcester State University, Academic Convocation will be held on Tuesday, Sept. 3, with students lining up at 2:20 p.m. at the Wellness Center. Students will leave from there for a 3 p.m. procession through the Tiffany Alumni Gates on Chandler Street. The event serves as a formal, ceremonial welcome to their new academic home.

As the students pass through the wrought-iron gates, which are the symbolic main entrance to the campus, faculty and administrators, dressed in the academic regalia of their alma maters, line both sides of the walkway and applaud as the students pass by. Returning students and staff also join in.

“In addition to the applause, you hear people say things like ‘Thanks for coming’ and ‘So glad you’re here,’” says Noah M. Dion, Ph.D., director for Academic Support Services, who is organizing this year’s event. “You’ve got all these words of encouragement as [students] walk through from faculty, from administrators, all the way up through the president, so it’s been something that really sets them off on a good footing as they start their career here.”

The procession will be followed by a short program in Sullivan Auditorium, which features student, faculty, and staff speakers, as well as an alumna convocation speaker, all of whom will welcome the students to the university. This year’s speakers include the deans of the two schools at WSU, Student Government Association President Maribel Mateo ‘20, alumna Jillian Witkowski ‘16, and Timothy Murphy, Ph.D., assistant professor of Urban Studies at WSU.

In years past, there had been a student welcome event that did not include a procession. It was poorly attended and eventually faded away, according to Linda S. Larrivee, ’76, M.S. ’80, Ph.D., dean of the School of Education, Health, and Natural Sciences. Larrivee went to President Barry M. Maloney with a proposal to revive the concept with a procession and a short speaking program.

“My idea was to have it be very formal so all new students would be more likely to come,” Larrivee says. “There would be a couple of talks but it wouldn’t be hugely long. We don’t want to bore the heck out of them, and because it was formal, all the faculty would be in regalia.”

Maloney didn’t have to think twice about the idea. “Linda at her core is a proud WSU alum,” he says. “She wanted a great new experience for our students. She asked I said ‘terrific.’” Maloney then brought the concept up at a meeting of the WSU Cabinet, a group of about 30 senior campus officials, where it was unanimously approved.

“The whole idea was I wanted new students to understand that this was their new academic home, and that the focus needed to be on the academics of the institution and how we were there to support them in their new endeavor,” Larrivee says.

Academic Convocation also serves as the first of two bookends to for students’ academic career at Worcester State. The other one is Commencement. “So, they come in and they’re welcomed in formally through the gates with faculty and administrators their regalia on, and at the end of their studies, four years later is Commencement, where we’re in our regalia and applauding them again,” Dion says. “So, it’s a very formal welcome and then a very formal send off.” 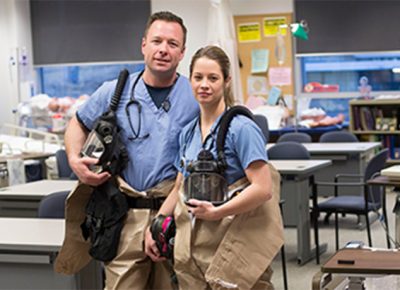 A grant from the E. Rhodes and Leona B. Carpenter Foundation will allow aspiring nurse leaders with a passion for improving the health of their community to graduate with little to no debt from . . .