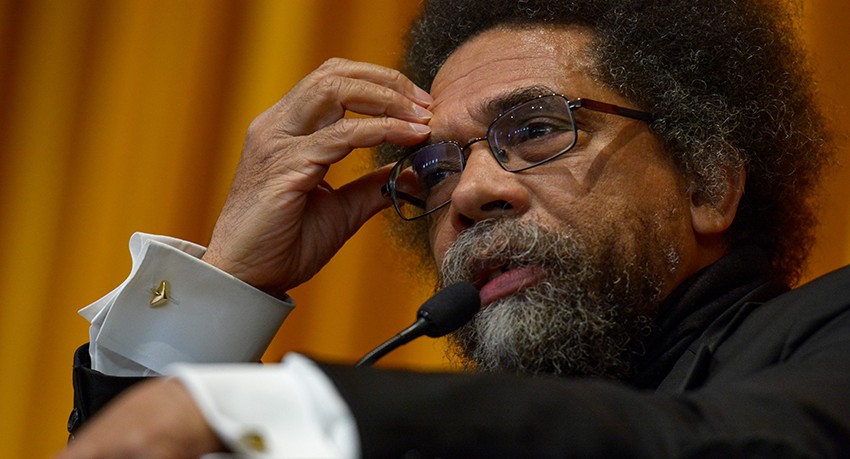 The last time author, scholar, and civil rights activist Cornel West visited Worcester State University, he focused on unconditional love and humanity. He continued in that vein on Wednesday, March 30—with his famous mix of humor and insight—when he delivered the annual Courageous Conversations lecture and called on the standing-room-only audience in the May Street Auditorium to “focus on integrity” as well.

“We begin not just talking about skin pigmentation…but what kind of human being are you going to choose to be? What kind of person will we be? That’s what integrity is all about,” West said.

It’s a question asked by W.E.B. Du Bois when he “wrote a trilogy to the younger generation,” West said in reference to Du Bois’ The Black Flame Trilogy.

“The focus on integrity is critical because you live in the age of Ferguson and the age of Occupy and the age of my dear brother Bernie Sanders,” he said. “It’s the quest for integrity in the face of oppression, not to live in a world of denial.”

The entrenched state of denial in white society has “dehumanized indigenous people,” he said. He told Worcester State students: “You’re going to have to cut against the grain. You can’t just be successful.”

Don’t become “protected by indifference” and “turn your back on those who are suffering and create a situation of moral constipation that gets blocked by envy and resentment,” he said. Come graduation, “you want to leave more courageous and compassionate.”

West called for a dialog like that of Socrates to fight against this on a personal level. “When we’re honest about ourselves, we have to be Socratic,” he said. “It’s not a question of either one of us being pure. We all have work to do” to erase the effects of white supremacy.

This is the “American Dream reimagined, from the vantage point of those who are marginalized,” he said.

During the question-and-answer that followed, West offered his take on Democratic presidential candidates Bernie Sanders—who he has supported publicly—and Hillary Clinton, Republican presidential front-runner Donald Trump, African American politicians, the Black Lives Movement, violence in predominantly African American communities, advice for those who are bi-racial, the role K-12 and college education systems should play in creating a more unified and peaceful world, and Louis Farrakhan, the leader of the Nation of Islam.

“Worcester State University’s Courageous Conversations Series is an important part of who we are as a university,” said President Barry Maloney in his welcoming remarks. “This year, students at universities across the country are speaking out about what it means to grow up in a predominantly white culture. Many of us—myself included—have learned a lot, and had my eyes opened to experiences I would not want to see my children face.”

“As many say, awareness is the first step,” he added. “As a result, we have opened conversations about campus climate on our campus this year. We have come up with some points of action that I sincerely hope will serve to improve this place—in our little corner of Worcester—so that our students will make the world a little more tolerant, a little more inclusive.”

West’s lecture was sponsored by the student organization Third World Alliance. “Dr. Cornel West, we welcome your words and visit, which becomes even more important given the current climate on college campuses and within our justice system,” said Daniella Owusu, TWA’s Courageous Conversations chair.

“We notice and fear the death of our black and brown men and women who continue to die at the hands of our justice system. We continue to see large (numbers) of black and brown students marginalized on college campuses (i.e. Missouri and Yale University),” she said. “There [are] still inequities in the hiring of ALANA faculty and staff at universities that have large ALANA populations. In such observations, it is hard for us to ignore that last year represented the 150th anniversary of civil rights legislation and how today’s struggle for acknowledgement, citizenship, and representation continues from ‘Reconstruction to Ferguson.’”

West stayed after the lecture to sign copies of Black Prophetic Fire (Beacon Press, 2014), his latest book. Immediately following the book signing, he had a lunch with a group of students, including members of TWA. 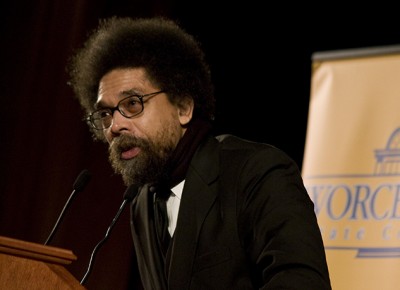 Cornel West to Speak About the 'American Dream Reimagined'

Author and scholar Dr. Cornel West will speak at Worcester State University, on Wednesday, March 30 at 10:30 a.m. in the May Street Building (formerly Temple Emanuel). The lecture, “The American . . .