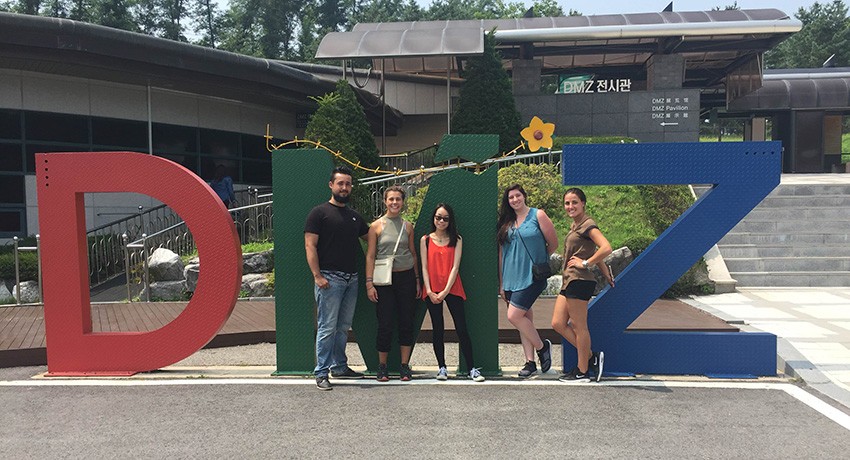 For the five criminal justice majors who joined Assistant Professor Hyesun Kim on a two-week trip to South Korea in July, it was a chance to compare criminal justice systems of several countries as well as learn about a different culture.

The trip was the basis of an elective course Kim ran for criminal justice majors and part of the International Summer School program at Dongguk University, one of Worcester State University’s nine international exchange partners.

“All the students were happy with the program,” she said. “They really liked it and want to come back next year. They said the two weeks were too short.”

It took seniors Christine Dowd and Andressa Rosa out of their comfort zone and introduced them to new people and a new culture.

“I enjoyed every day I spent there and could have never imagined the things I saw or people I met,” Dowd says. “Most learning about the Korean culture actually happened outside of the classroom. We made friends with some Korean students in our class, and they always showed us a good time.”

Rosa adds that visiting Seoul, South Korea “opened my eyes to see a little bit of the outside world and how other countries deal with similar situations that we deal with here.”

In the classroom, students from 17 different countries learned about the Korean language, listened to a lecture on culture and criminal justice, and watched some films. Afternoons were spent on cultural excursions like visiting the demilitarized zone (DMZ) between South Korea and North Korea, a Buddhist temple, and the annual Boryeong Mud Festival. They also took field trips to a police department, prison, and juvenile detention center that were scheduled by Dongguk University. In the evening, the group could go sightseeing around Seoul.

“We revisited the American criminal justice system, touched a bit on the Australian system, and focused a great deal in the South Korean criminal justice system,” Rosa says. “As much as there are many similarities between the two systems, I have to say they are very advanced in some aspects. They also use a preventative measure to fight crime. Once you turn 18 in South Korea, you are obligated to give your fingerprint that they keep in databases. Therefore, more crimes in South Korea are cleared within a short period of time.”

The students felt the tension between South Korea and North Korea during their stay. “South Korean students and citizens deal with the very real threat of North Korea every day,” Dowd notes.

Visiting the DMZ was Rosa’s most memorable experience. “What I found most amazing was the fact that even after North Korea constructs various tunnels to reach South Korea and possibly take over, South Korea has an immense hope that one day both countries will unite,” she says. “They have a train station that is built in South Korea where it is simply a tourist attraction at the moment in hopes that in the near future, they will be able to open it, and you would be able to take a train north to North Korea.”

For Kim, the trip was a chance to visit where she grew up and attended college. (She earned her bachelor’s degree from Dongguk University.) “I am very familiar with the culture on campus, although there have been changes since I graduated in 1991,” she says. “I know its curriculum as well as Buddhism, the culture, and the environment in Seoul.”

Kim hopes to get the course reclassified as a Liberal Arts and Sciences Curriculum course, which would enable her to open the trip up to all majors. If that happens, students who sign up for the trip in the summer of 2017 will be able to attend the other lectures offered in the Dongguk University’s International Summer School program.

No matter how the course is designated, Kim plans to be one of the program’s criminal justice lecturers next summer. 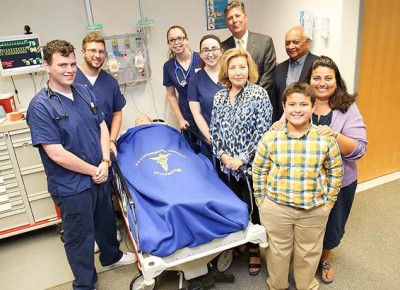 Before a room full of grateful students, the Nursing Simulation Center at Worcester State University was dedicated to Dr. GB and Lexi Singh on Monday, September 19, in a ceremony that recognized . . .