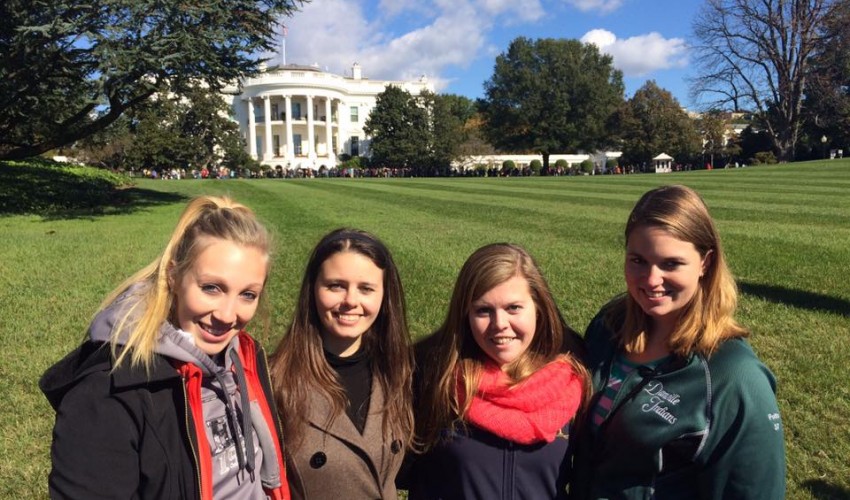 While the WSU community was following coverage of the government shutdown and Planned Parenthood hearings happening on Capitol Hill this fall, seniors Amy Randall and Zachary Pappas experienced them first-hand as Washington Center interns.

They were Worcester State’s 57th and 58th students to intern with The Washington Center, according to Assistant Director of Career Services Dianne Matos. WSU has been a Washington Center partner since 1998.

Sitting in on a House Judiciary Committee hearing on Planned Parenthood in early October was just one of the activities Randall did that related to her major in health education, minor in psychology, and interest in women’s health.

As a health policy and communication intern for the National Women’s Health Network, she worked on the nonprofit’s social media outreach and blog, helped field questions from women who call or email the organization for assistance, attended health fairs, and met with congressmen and -women to advocate for the Each Woman Act.

“The reason I got involved in this particular internship is I took Psychology of Women with (Psychology Professor) Lori Dawson,” Randall says. “I think it related to my studies overall because I’ve taken a number of reproductive health classes. Last year, I took a political science class, which prepared me to live and work in D.C. My global health class also helped me.”

Criminal justice major Zachary Pappas became interested in the opportunity because his brother, Nicholas, enjoyed his Washington Center internship with Interpol in spring 2014. “I have an interest in working in federal law enforcement so I figured that interning in our nation’s capital would help me do that,” he says.

He opted for a placement with the Federal Trade Commission’s Division of Advertising Practices because he’s interested in investigative work. “I’ve had the opportunity to assist attorneys and law enforcement with investigations into claims that companies are making,” he says. “Companies and the people selling their products have to substantiate their claims, and each claim has to be reasonable enough for the average consumer to understand.”

“The internship relates to what I’m studying in my criminal justice classes,” Pappas says. “For example, Research Methods in Criminal Justice played a large role, and The American Judicial System was important because you learn a lot about courtroom procedures. Planned Change in Criminal Justice was important, too, because it introduced me to a broader aspect of the field and taught me how to plan. You have to be able to plan things out, set out a strategy to meet deadlines. That was very essential because I was given numerous assignments with deadlines.”

Because he was interning for a federal agency during the fall congressional budget dispute, he received email updates about plans being made in the event of a government shutdown. He also was able to stand along the parade route when Pope Francis visited Washington in September.

In addition to sitting in on congressional hearings related to their internships, Randall and Pappas took a class at The Washington Center, attended the center’s LEAD Colloquium sessions with guest speakers, and volunteered with a D.C. nonprofit. Randall volunteered at a food pantry and Pappas volunteered at Fisher House Foundation’s booth at the Marine Corps Marathon.

Pappas’ favorite LEAD speaker was Tim Gallagher, special agent in charge of the FBI’s criminal division at its D.C. field office, because he is a Washington Center alumnus and interned in  the FTC’s Consumer Protection Bureau. “It was really good to hear from someone who started out in my position and has carved out a pretty good career for himself,” Pappas says.

For Randall, she was most impressed by a photographer who travels to different countries to take pictures of women in women’s health settings such as giving birth.

Both students enjoyed spending a semester amid the hustle and bustle of Washington, D.C., and getting to know other interns from around the country and the world. Randall was a student ambassador and her mentees were from Puerto Rico, Mexico, Belgium, and Greece. She helped them set up their cell phones to work in D.C., translate their papers for assignments, with directions to places around the city, and even to understand the meanings of American sayings like “wicked cool.”

“It has been truly amazing to see people from so many cultures living in one place,” Pappas says about D.C. in general and The Washington Center in particular.

“The Washington Center has given me a great opportunity that as many people as possible should take advantage of,” he says. “Living and working in the nation’s capital for a semester is something I highly recommend for other Worcester State students. Aside from gaining professional experience, you make connections with other people that you will keep for a lifetime.”

All that has Randall—who will complete her degree in January—thinking about looking for jobs in D.C. She also plans to pursue jobs in Atlanta.

“I met some people in this field who are from Atlanta while I was in D.C.,” she says. “There are many women’s health job opportunities there, including one of the CDC (Centers for Disease Control) offices.”

Worcester State students interested in applying for a Washington Center internship should contact the Career Services Office at 508-929-8072. 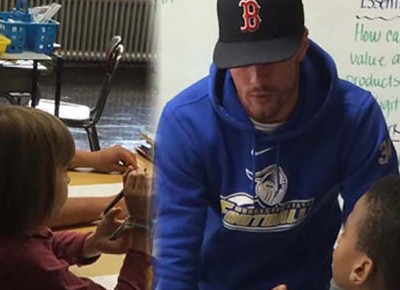 WSU Athlete Mentor Program Teams up with May Street School

Every day the week of November 30th, a group of Worcester State University’s AMP members went next door to the May Street School to work with fourth graders in the classroom. Each AMP member works . . .