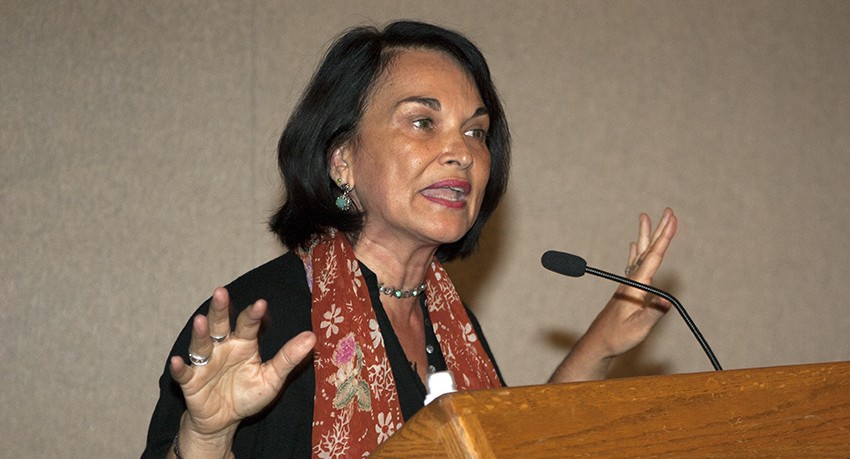 Darder Addresses ‘Issues of Culture and Power in the Academy’

Antonia Darder, Ph.D., made a case against institutional racism during a talk and film presentation last week. Her lecture was entitled “Issues of Culture and Power in the Academy” and was part of Worcester State College’s Courageous Conversations series.

“If we are going to truly be diverse,” she said, “we have to pay attention.”

She urged students and faculty to work on issues large and small, for example, making certain to pronounce names correctly. “What happens to kids when we cannot pronounce their names?” she asked.

“I am not a neutral scholar,” she said and her work focuses on documenting institutional racism.

“Universities are a mess,” Darder said, pointing out that college retention rates are often below 60 percent. “If we want students to succeed, we need to be willing to be there for students and to listen to them.”

She stressed that she did not feel that college and university racism was deliberate. “I believe that most people are good, but as humans we have a hard time seeing, ‘other,’ ” she said.

Darder is a professor of educational policy studies and Latino/a studies at the University of Illinois, Urbana Champaign and internationally recognized for her contributions as a radical educator. Her current work focuses on comparative studies of racism, class, gender, and society. Her teaching examines cultural and global issues in education with an emphasis on identity, language, and popular culture, as well as the philosophical foundations of critical pedagogy, Latino and Latina studies, and social justice theory.

The series, sponsored by the college’s Third World Alliance, Diversity and Multicultural Affairs Offices, is celebrating its third year. The college has also welcomed such distinguished speakers and thinkers as Cornel West and Angela Davis as part of the Courageous conversations series.