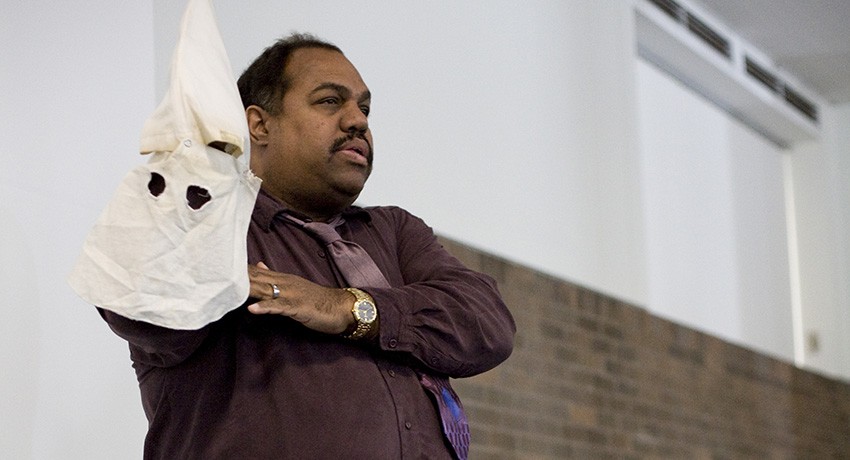 Daryl Davis’ quest to find out why some people think they are superior to others simply because of their skin color began in 1968, he told a rapt audience of students, faculty, staff, and community residents at Worcester State University on Wednesday, February 22. That was when, as a member of the Belmont, Mass. Cub Scouts, he was pelted with rocks, bottles and other things as he walked with his troop in a Patriots Day parade from Lexington to Concord.

“My first inclination was they were angry at the Cub Scouts,” Davis said. “It was incomprehensible to me that someone who never met me…would want to hurt me.”

Even when his parents told him that white people were throwing things at him because he was black, Davis said he didn’t believe them. But it was 1968, a “very turbulent year” in the Civil Rights Movement. Rather than be traumatized by the incident, Davis said he began reading every book that he could find on people of any race who thought their skin color made them superior. “I knew then that you are not born with this ideology,” he said. He noticed that white men wrote all but two books about the Ku Klux Klan. Black men wrote the other two from the perspective of escaping a lynching.

An accomplished blues and R&B musician who graduated from Howard University with a degree in music, Davis told how his music brought him into contact with a Klan member and eventually launched his research for his book Klan-Destine Relationships.

As a pianist in a country western band, Davis met the man when he played at what he called an all-white lounge in Frederick, Maryland. The man came over and said, “This is the first time I’ve heard a black man play like Jerry Lee Lewis.” He didn’t believe Davis when he said Jerry Lee Lewis learned his piano-playing style from black musicians. After inviting Davis over to his table for a drink, he said, “This is the first time I’ve had a drink with a black guy.” Davis asked him why, and the man said he was a member of the KKK. “I burst out laughing,” Davis said. They became friends, with the man coming to see Davis’ band whenever they played at the lounge.

Eight years later, Davis decided to begin work on a book about the KKK and called his friend for help. He wanted to interview Roger Kelly, Maryland’s Grand Dragon at the time and who later became Imperial Wizard.

“In my meeting with Roger Kelly, I learned that ignorance breeds fear,” Davis said. They also became friends, with Kelly eventually visiting Davis in his home without a bodyguard and Kelly inviting Davis to Klan rallies. CNN found out about their friendship at a rally and did a story on them, which resulted in Davis getting a deal to publish Klan-Destine Relationships.

While Kelly told CNN he believed in “separation of the races” despite his friendship with Davis, he told Klan members at a rally shown in the clip that he respected Davis because he listened to him. Davis told the audience to challenge those who disagree with them politely but firmly. “Chances are they will reciprocate.” Kelly has since quit the Klan and gave his robes, masks and hoods to Davis, which he showed the crowd. Davis ended his lecture by playing a song on a keyboard similar to what he played the night he met the first Klansmen.

The Diversity Lecture Series is sponsored by the Student Center/Student Activities and Disability Services Offices.

Worcester State University will welcome Dr. Imo Aisiku '92 as its 136th Commencement speaker, Saturday, May 12 at the DCU Center in Worcester. Dr. Aisiku serves as vice-chair and chief of critical . . .