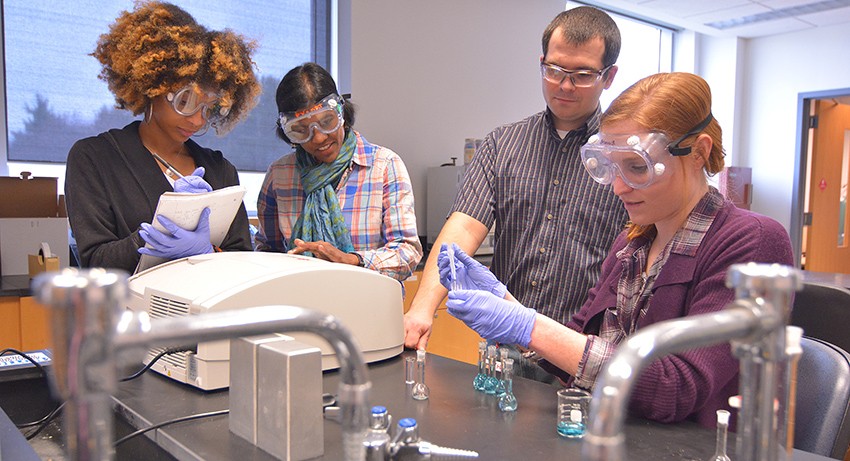 Experiments on phosphorus in dish soap and volatile organic compounds in nail polish removers using “green methods” that could one day replace EPA standards prepare our green chemistry students for jobs in a market about to explode.

Two trends have been identified in business generally and the chemical industry specifically that favor chemists with backgrounds in green chemistry:

Seniors Brian Funaiole and Brianna Brosnan, both green chemistry concentrators, and junior Tatiana Buchannan, a general chemistry major, presented the research they conducted this past semester in the Environmental and Chemistry Lab at Bridgewater State University’s Sustainability Symposium.

Their poster not only showcased findings of their experiments, but also their understanding of the 12 principles of green chemistry, which promote “the design of chemical products and processes that reduce or eliminate the use of generation of hazardous substances.”

When running the tests on dish soap to detect phosphorus levels, the students opted for a “greener” method. “The current method for phosphate detection uses antimony, a toxic metal. So we used a nontoxic compound called thiourea in place of that,” Brosnan explains.

Both methods “form the colored complex that is detectable by the same spectrophotometric instrumentation as the EPA method,” according to the students’ research poster. But the thiourea approach exceeds current Environmental Protection Administration standards and could replace them in the future, Brosnan says.

The three lab partners found the soap contained phosphate, but under the EPA’s allowable limits. The EPA regulates phosphate levels in products because it’s impossible to keep the nutrient out of storm-water runoff. If too much phosphate drains into water sources like lakes, rivers, and swamps, algae grows exponentially, which reduces oxygen needed by fish and other aquatic life.

In another experiment, the students chose to use the Chemistry Department’s nuclear magnetic resonance machine to perform a qualitative analysis on three types of nail-polish removers: one with acetone, another with ethyl acetate, and one with soy ester, a nail-strengthening ingredient. They used the NMR because it was more energy efficient than other testing methods for their small samples.

When it comes to polish removers with acetone and ethyl acetate, “we found that manufacturers are swapping one evil for another,” Funaiole says. “They are substituting ethyl acetate for acetone in an attempt to make it gentler on your skin, but both are bad for you because they contain volatile organic compounds.”

The “greener alternative,” the students concluded, is the polish remover with soy ester.

In addition to finding that dissolved oxygen concentrations that “fell within the EPA regulations to support aquatic life,” they ultimately decided that “the probe method is the greener approach,” according to their research poster.

Inspired by a New York Times article on worker safety in nail salons, the students expanded their research to phthalates in nail polishes. They also performed experiments on sludge from a wastewater treatment plant to measure metal content using a flame AA. Both experiments were underway at the end of the fall semester.

Brosnan credits Dilip, her faculty advisor, for steering her toward the green chemistry concentration. “Our future should focus on more sustainable practices, especially in the field of chemistry,” she says.

After all, chemistry has long attempted to improve lives—and has met varying degrees of success as well as failure. The growing interest in green chemistry aims to minimize waste generated by chemical production, replace existing products with less or nontoxic ones, and use renewable raw materials.

These objectives motivate Brosnan’s plans to continue studying green and environmental chemistry in graduate school and eventually work on legislation or regulations for the EPA. “It would also be nice to earn a presidential award for green chemistry,” she adds.

Meanwhile, Funaiole is putting these objectives into practice at his job in the research and development department of Hollingsworth & Vose in West Groton, Mass. “I wanted to concentrate in green chemistry because I want to make our manufacturing processes more environmentally friendly,” he says.

The semester-long lab was Buchannan’s first exposure to green chemistry principles and practices. While she is still deciding which chemistry concentration to pursue, the lab’s lessons are relevant to her work as a hairdresser and goal to become a cosmetic chemist.

“The experiments that struck me the most were the phosphate ones. I was very interested in seeing how much phosphate is in hair conditioner,” she says. “We found that it was under the limit of detection. But doing the research made me really think about the products we use going down the drain and affecting the ecosystem.” 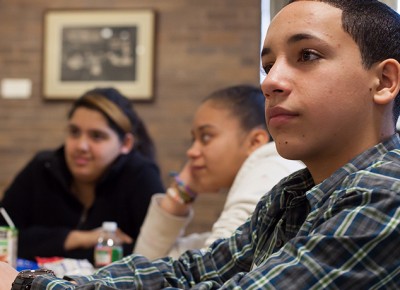 Worcester State University’s Latino Education Institute’s recent successes mirror the success they are having with a target audience: Latino youth. In the past month alone, LEI won a . . .