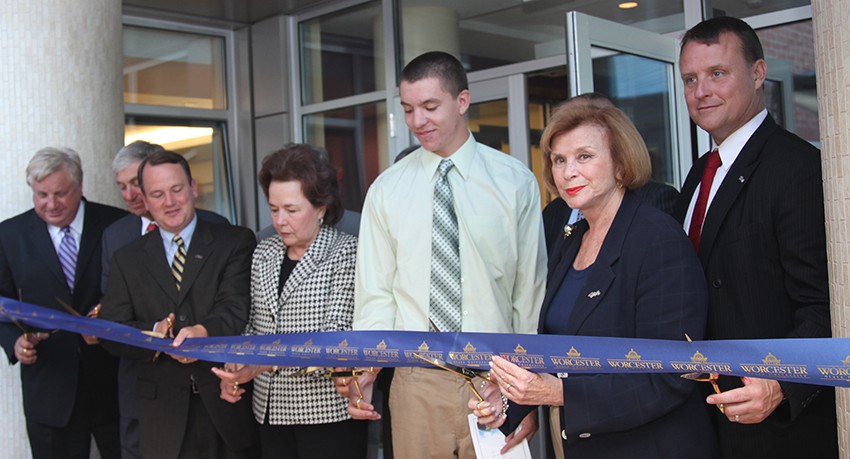 A host of dignitaries joined the Worcester State University community in celebrating the ribbon cutting and official opening of the new wing at Dowden Hall, Tuesday, September 7.  The project adds 177 new beds to the residence hall.

Worcester State University Board of Trustees Chair John Brissette ’88 said, “I can’t emphasize enough the value of the support of Governor Patrick and Lt. Governor Tim Murray and our legislative delegation for this project—and there is more to come.  We will build a new Wellness Center.”

Commissioner Freeland stressed the importance of investing in facilities on college and university campuses. “Good, quality facilities send a powerful message to our students; ‘you matter,’” he said.  The addition to the 20-year-old building has earned a LEED Gold level by the U.S. Green Building Council and 96 percent of all construction waste was recycled. The 100,000-square-foot building features a four-story glass entry facade, new common spaces, fitness equipment and quick dining options. “We are so proud to be able to meet the increasing demand for residential space on our campus, while achieving LEED Gold status.” said President Janelle Ashley.

The building is named for late Vera Dowden Baldwin, a native of Wales, who graduated from Worcester’s South High School and in 1934, from Worcester State Teachers College. She was an elementary school teacher and assistant principal before joining the faculty at Worcester State College in 1957. Dowden was an instructor in the Education Department and supervisor of student teachers before becoming an associate professor. In 1963 she was named Dean of Women and, in 1970, she became the College’s first Dean of Students. She helped guide the College through the turbulent years of the Vietnam War.

Forty years after her graduation, in 1974, Dowden delivered the College’s commencement address, and in 1978, the College honored her with an Honorary Doctorate. She chaired the first revival of the Scholarship Tea Committee in 1995 and served as co-chair until 2000. In 1999, Dowden received the Distinguished Alumni Award for Outstanding Service to Alma Mater, the highest non-degree recognition bestowed by the College on an alumnus or alumna for exceptional loyalty, commitment and dedication to the College. Because of the high esteem in which Dowden was held by the entire Worcester State College family, the College’s first traditional dormitory complex, dedicated on September 26, 1990, was named in her honor.

Worcester State has been named a "Best in the Northeast College" by the Princeton Review for the seventh year in a row.  It is the only Massachusetts State College with this designation.  "We are . . .