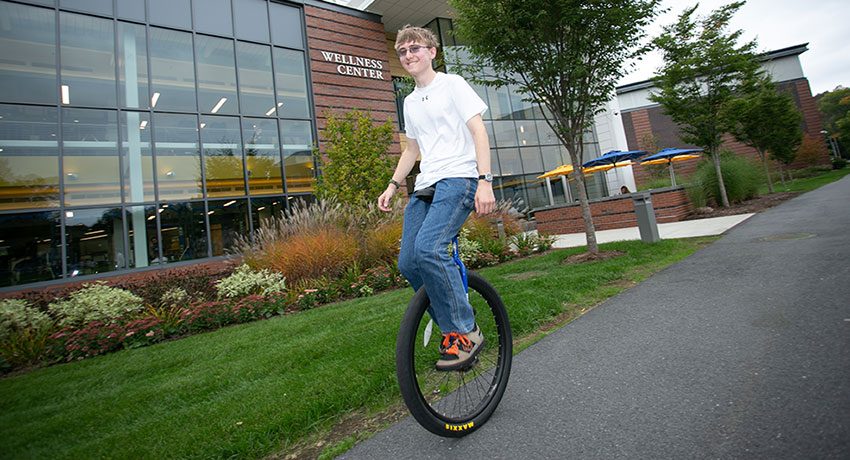 Daniel Keller ’21 recently completed the Mount Washington Auto Road Bicycle Hillclimb, a 7.6 mile trek up the highest mountain in the Northeastern United States, on his unicycle.

What appeals to you about the unicycle?
Riding a unicycle is a unique experience. It kind of makes you feel like you’re floating, while still having a direct connection to the ground. It’s a good conversation starter and tends to attract lots of “oohs and ahhs” which are always fun to hear.

Why don’t we see more people riding unicycles?
I think it’s simply because most people think it’s too hard, and something only circus performers should bother learning. It’s a quite learnable skill. It just takes practice like anything else.

Why did you want to participate in the Mt. Washington Auto Road Bicycle Hillclimb?
I thought it would be a fun challenge, and that if I could ride a unicycle in the most difficult hill climb race in the world, it would give me confidence to complete other challenges. Being attainable but not impossible made it a great goal to have.

What was the hardest part of the race?
Everything. It’s been called the most difficult hill climb in the world, which is easy for me to believe after doing it. Besides being tremendously steep, I was literally riding in a cloud at the higher elevations. Visibility was terrible, and the wind was frigid, making it hard to stop for too long.

Are unicycle riding skills transferrable?
It goes without saying that learning to ride improves balance, which should be helpful for other balance-oriented sports, like bicycling or skiing.

What is the most common reaction you get from other people when you are riding?
Most people just kind of stare, but frequently somebody will strike up a conversation, ask me questions, and talk about the time they tried to learn. I’ve even been videotaped a few times. A lot of people wave, yell, or make an unoriginal joke. The most common ones are “Where’s the rest of your bike?” and my personal favorite, “Do a wheelie!”

If someone was interested in learning how to ride a unicycle, how would you advise getting started?
Learn on a small wheel, like a 20”. It’s less intimidating to ride. If you’re serious about learning, it’s worth the money for a better-quality unicycle that rides smoothly, which are only sold at unicycle.com, so I would recommend visiting their website. From there it’s just practice.

Now that you’ve conquered Mt. Washington, what’s next?
I’ll keep riding and improving my skills. I’m in the process of learning some new tricks, and I plan to participate in future races up Mount Washington. 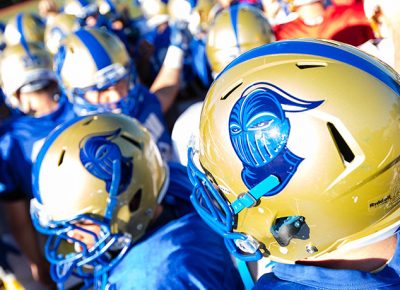 The 2018 fall season was both eventful and historic for the Worcester State University Athletic Department, with 10 of the University's 20 varsity teams in season. If you missed even a moment of the . . .