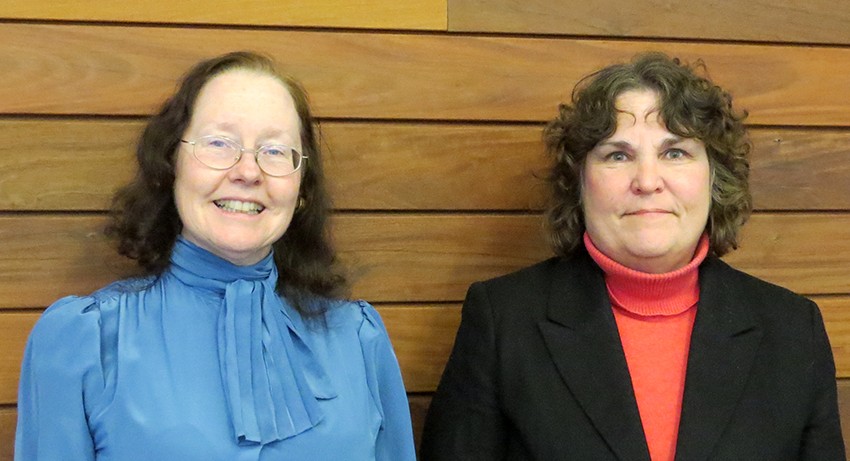 English Professors Discuss Their Forthcoming Book on the Gothic Genre

The Gothic literary genre, which began in 18th century Britain as a “reaction to enlightenment culture,” has proven itself a timeless storytelling device “used to understand a certain time,” according to Assistant Professor of English Kathleen Healey and Professor of English Sharon Yang, who discussed their forthcoming collection of essays Gothic Landscapes: Changing Eras, Changing Cultures, Changing Anxieties at the March 4 Shared Scholarship.

Back then, “there was this belief in the rational aspect of man,” Healey said. “Gothic shows that’s not true. There’s chaos, chaos in all of us.”

It was a time when there were many scientific breakthroughs and the Industrial Revolution. “The Gothic speaks to those anxieties,” she said.

In their book, Healey and Yang solicited essays that explore various uses and applications of Gothic not only in literature, but also film, art, and even video games. “Our approach to Gothic is different and goes in a direction that not many people have gone: the transnational part, transgeneric, literature and painting, video games, film—how the Gothic finds its way into different art forms,” Yang said.

The collection includes an essay written by one of Yang’s former students, Amber Vayo ’04. In her essay “What the Green Grass Hides: Denial and Deception in Suburban Detroit,” Vayo examines the novel “Virgin Suicides,” which was later adapted for a movie with the same name, through a Gothic lens. (Vayo is currently working on her Ph.D. at University of Massachusetts Amherst.)

“We worked very hard on making sure we had a good product before we went searching for a publisher,” Yang explained. They secured Palgrave Macmillan, which is known for publishing books on the Gothic genre. The collection is scheduled to be released in October.

What is chocolate to you? A sweet treat? A mood booster? A perfect partner for peanut butter? In a recent talk in the Blue Lounge titled “Good Bugs, Bad Bugs, and Chocolate,” Deicy Carolina . . .