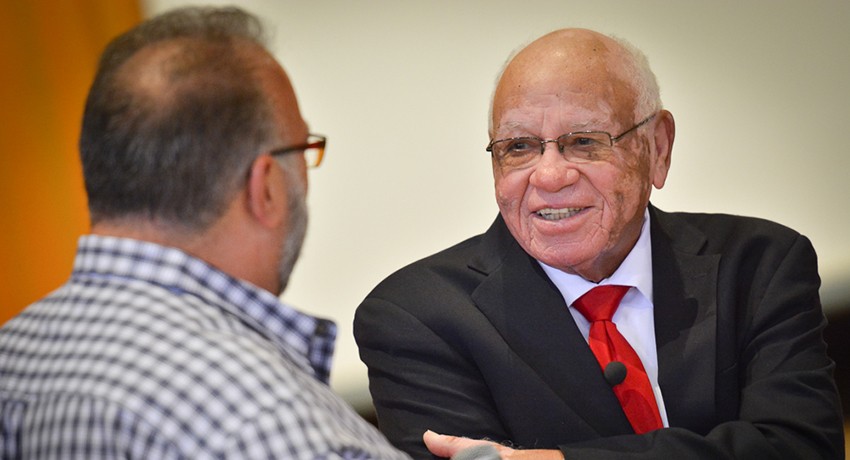 It was 1971, and the city of Alexandria, Va., was embroiled in an effort to desegregate its public schools. When city and school officials decided to consolidate three high schools into one, they turned to Herman Boone to lead the new integrated football team, the Titans.

“Racial tension was widespread and explosive in Alexandria. It had been under court order to desegregate for many years, yet refused,” Boone told a captivated audience of more than 150 Worcester State University students, faculty, staff, and coaches, members of the Worcester community, and students from Putnam Science Academy in Connecticut gathered in the May Street Auditorium on Tuesday, September 28.

The plan to consolidate and create T.C. Williams High School “was extremely unpopular,” he said.

“I had arrived in Alexandria from North Carolina one year before this consolidation,” he added. “Someone with more seniority should have been appointed coach instead of me. However, doing so would have meant that all the coaches would have been white.”

His coaching record in Virginia and North Carolina, his home state, made him a good candidate for this job. He had led his public high school teams to many victories.

Boone tried to get out of it, but his superior told him, “My job depends on you coaching this team.” So he decided to accept what may be considered the most difficult challenge of his life. He relied a great deal on his faith to carry him through the season.

Before he could focus on his players, Boone said he had to win over his coaching staff. “If I can’t get the coaches to sit together, how would I get the kids to play together? I knew that day that leadership had to emerge out of that meeting. So I said, ‘Gentlemen, we’re going to have a great football team even if you don’t like each other. But you will trust each other.’”

He took the same approach with his players, receiving permission to take them to the Civil War battlefield of Gettysburg, Penn., for a week of special training and bonding.

Unlike in the movie “Remember the Titans” that is based on this story, in which Boone is portrayed by Denzel Washington, Boone took his players by bus to the Gettysburg cemetery for a heart-to-heart talk about racism and acceptance. (In the movie, he has them run through a forest and swamp to get to the cemetery.)

Boone took them to that cemetery “because Gettysburg is a symbol of oneness in our country,” he explained. There, he told his players, “Gentlemen, two armies met each other here and over 50,000 of our citizens were killed [or injured]. But what came out of that war? Lincoln said that as a result, our country became one country. If it can happen to one army, it can happen to one team.”

Boone strongly believes that talking to each other is an effective antidote to prejudice and bigotry. “Respect begins with dialogue; dialogue begins with trust,” he said.

So at Gettysburg, he required that his players “visit rooms of each team member they didn’t know.” The idea was to encourage them to get to know each other and find out that although they were from different backgrounds, they could find a way to accept their differences.

He also assigned seats on the buses based on the players’ roles. One bus was for the defense; the other for the offense. That was done to get the players out of their “racial comfort zones,” Boone said.

Boone’s training worked. The players talked and played cards together on the way back to Arlington. “The Titans learned to accept their differences, and they became a powerful football team,” he said. They won the state championship that year and were commended by President Richard Nixon.

“They are now making contributions throughout the world,” Boone said about his former players. They still identify themselves as the “71 Original Titans,” and Boone wore a sport coat with a patch displaying that message during his lecture.

“These two high schools showed Worcester how this neighborhood can learn not to be afraid of diversity,” he said. 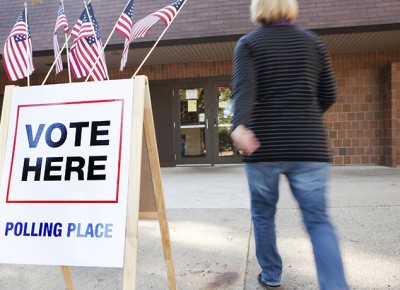 Panelists Discuss the State of Civic Engagement at Colleges

Over 30 people from Worcester State University, area colleges and schools, nonprofits, and city government gathered in the Student Center’s Blue Lounge the morning of Friday, September 23 for a . . .