The Women In Business (BA/WO 482) class met on Wednesday afternoons this semester and were privileged to be introduced to many women who had rich and varied careers. For the final session, Stephanie Wilson, one of our students, introduced her great aunt Suzanne St. Pierre. She is a former producer of news magazines and over 50 segments of the well-known CBS news program, 60 minutes. She produced segments for Mike Wallace, Morley Safer, Diane Sawyer, Lesley Stahl and Meredith Vieira.

Among the many awards she has received are four Emmys, three Columbia-du-Ponts, a Peabody and an American Women in Radio and Television Award. Several movies have been based on her segments for 60 Minutes including, “In the Best Interest of the Children” with Sara Jessica Parker, “True Believer” with James Woods, “Rain Man” with Dustin Hoffman and Tom Cruise, and “The Marva Collins Story” with Cecily Tyson.

Suzanne grew up in Worcester and graduated from Smith College at a time when careers in media for women were practically non-existent. She spent many years working her way up from secretarial jobs through a variety of positions at NBC, ABC, and CBS, thus giving the students the impression that they need to be aggressive yet patient, to always be well-prepared and to follow their dreams.

She shared many wonderful stories about the work that went into the research and building of the many segments of “60 Minutes” and the human interest and moral justice that the stories portrayed. She herself is a great story teller. Ms St. Pierre showed us a clip of a segment of “Marva,” an extraordinary teacher in the slums of west side Chicago who used such positive reinforcement that the children in grade school read and understood Shakespeare and a wide range of authors we typically read at the college level. She followed up with interviews with the students who were later in college and law school.

She also recommended that we read the new publication by Nancy Collins.

WSC students are fortunate that there are community role models graciously willing to share their career stories. This should help students learn how to negotiate in the workplace. We are all most appreciative of the time that our guests have given and of the information they’ve shared.

Other guests who have brought us so many valuable lessons from their experiences are:

current owner of a sheep farm 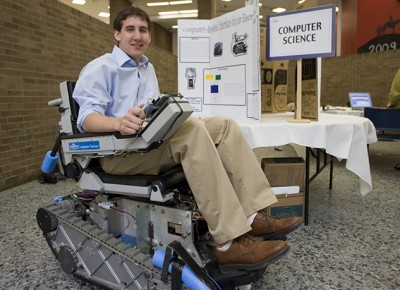 Over 400 students, faculty, staff and community members attended the Second Annual Celebration of Scholarship and Creativity and annual student art show, Wednesday, April 29. “It was wonderful . . .