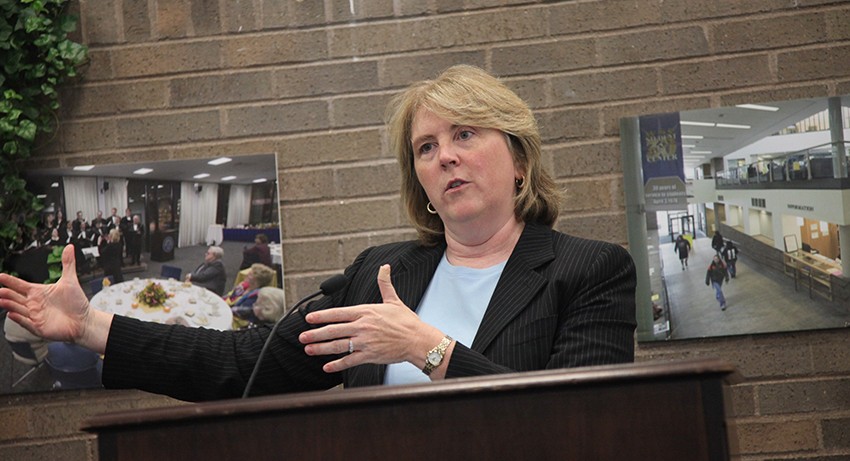 Jacques noted that more than half of Americans support some recognition of civil unions and that significant gains have been made for gay rights. She said that corporate America has been ahead of the courts and government in supporting equal rights. “That’s a bottom line decision,” she explained, “If the best and brightest engineer happens to be gay, you had better treat them equally,” she said.

She pointed to acceptance of civil unions as a sign that the movement is gaining steam. She pointed to the military’s “don’t ask, don’t tell” policy and gay marriage rights as areas where activists are still working for change.

“This is our generation’s civil rights battle,” she said and urged students to support gay rights, even if they are straight. “Three-quarters of the Mississippi Freedom Riders were white,” she said. She also urged students to raise the issue in their communities. She urged the audience to refrain from using phrases such as, ‘that’s so gay.” She explained that no politician can survive making a racist statement. She asked the question, “Would you say, ‘that’s so Jewish?’ or ‘that’s so black?'”

She does have a lot of optimism for the issue, quoting Martin Luther King, “The arc of the moral universe is long, but it bends toward justice.”

As a state senator, Jacques successfully pushed for the inclusion of sexual orientation in the Commonwealth’s Hate Crimes Statute in 1996. She also passed legislation establishing standby guardianship provisions to protect the children of AIDS patients and other chronically ill individuals. She has been an outspoken advocate for the rights of gay and lesbian youth in Massachusetts. She was a leading Senate advocate on civil rights, consumer protection, criminal justice and victim’s rights. In 2002, Jacques led a bi-partisan coalition of legislators to defeat the so-called Defense of Marriage Act in Massachusetts. Jacques formerly served as president and executive director of the Human Rights Campaign (HRC). Jacques led HRC through the successful defeat of the anti-gay Federal Marriage Amendment.