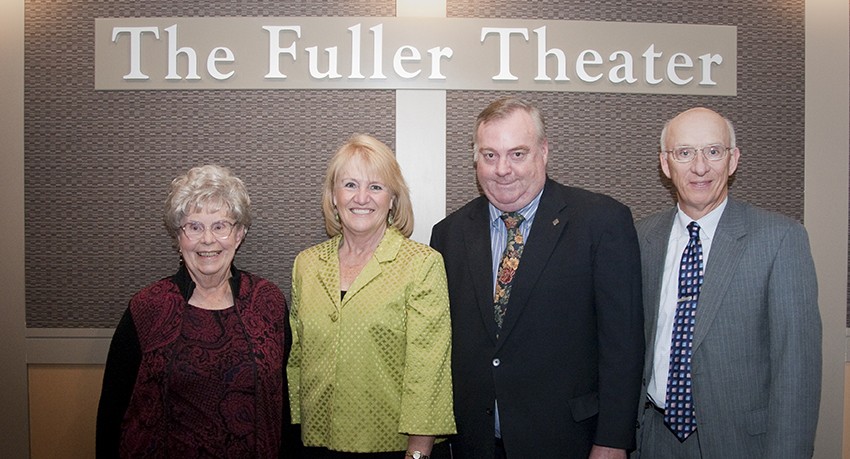 On opening night of Worcester State Theatre’s production of “Bus Stop” last Thursday, trustees of the George F. and Sybil H. Fuller Foundation were praised for enabling the transformation of the historic playhouse/lecture hall in the Administration Building into a state-of-the-art educational theater.

“Your generosity has made a tremendous difference for our theater program,” said President Ashley.” It is a milestone in the history of Worcester State College and this theater.”

Alumni attending opening night of the play as part of the Alumni Tiffany Gates Society event especially appreciate the theater’s transformation, she noted. So many alumni have worked on theater productions over the years. It also has served as a lecture hall and, for a time, a place where students gathered for attendance and assembly every morning.

“With the support of the Fuller Foundation, this theater is now equipped for the 21st century,” President Ashley said.

Foundation Trustee Mark Fuller shared the history of the Fuller Foundation with the audience. “George had in mind all along that whatever he had over and above what he needed would be given back to the Worcester community, and that is what has happened,” he said.

“Let me tell you, the transformation that has occurred here, especially in the last 10 years, is extraordinary, it’s just amazing,” he added.

“I want to thank the Board, President Ashley, the faculty, the staff, the students, and the community at large for all they have done to move Worcester State College forward. It is a privilege to be here this evening,” Fuller added.

In addition to Mark Fuller, his wife, Jan, mother, Joyce, and cousin David Hallock attended the unveiling and dedication of the Fuller Theater and first performance in the newly renovated theater.

“To reopen this theater as The Fuller Theater is a fitting tribute not only to the Fuller Foundation’s incredible support of theatre education here, but also to their willingness to assist Worcester State in meeting various needs of our students and faculty,” said Tom McNamara, vice president of Institutional Advancement.

Designer and Associate Professor of Theatre John Hood also pointed out that theatre students are now learning stagecraft with equipment and acting in an environment similar to what they will encounter in the professional theaters once they graduate.

Worcester suffers from Gilligan’s Island syndrome said Andy Fish, local artist and author of graphic novels and comic books. “We’ve made a radio out of coconuts and we’re pretending it’s a . . .