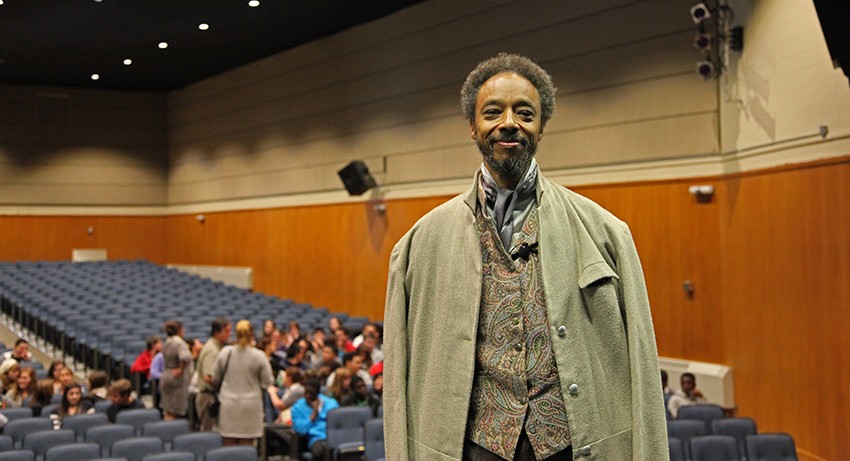 The History and Political Science Department hosted both performances and a workshop for students as part of a multi-year commemoration of the 150th Anniversary of the U.S. Civil War.

At the morning performance, the Sullivan Auditorium was swarming with students from local high schools, including Burncoat High, University Park, North High, Claremont Academy, Tantasqua High and Millbury High. WSU students were also in attendance. The high school students were eager to see the Frederick Douglass performance, which correlated with their studies at school. Peartree made a special effort to involve them in his performance and to make them think about their past history in the United States.

Caleb Encarnacion-Rivera, 15, from University Park High School, said, “This performance makes me think more about slavery and have sympathy for them. I can’t image how they felt being torn away from their families.”

Loryn Bley, 16, from Burncoat High School said, “I liked learning about the history of the slaves.” At the conclusion, the students asked questions of Frederick Douglass, prompting Peartree to answer in character.

Frank Minasian, chair of the History and Political Science Department, was thrilled about the morning performance because he wants to share the Civil War commemoration events with the community. “There’s nothing better than to show Fredrick Douglass, who was the symbol of freedom for slaves,” he said. “I wanted everybody to see what I believe is the cause of this great holocaust that happened in America to black people.”

“Stories Are A Tellin'” was also performed Wednesday night in the Ghosh Science and Technology Center’s auditorium.

As part of a multi-year commemoration of the 150th anniversary of the U.S. Civil War, the Worcester State University History and Political Science Department is featuring the one-man play, . . .