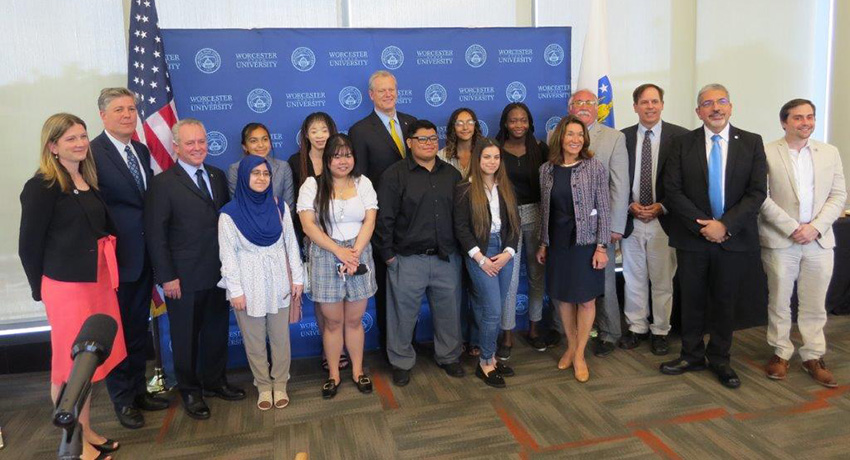 Gov. Charlie Baker and Lt. Gov. Karyn Polito were at Worcester State University’s Sheehan Hall on Friday, June 18, for a roundtable discussion with students participating in the state’s Early College Program, which helps high school students prepare for higher education while also giving them the opportunity to earn college credits at no cost.

Several state legislators, including State Sen. Mike Moore and State Rep. Jeff Roy, both early supporters of Early College, were also on hand for the hour-long discussion, which included current and former students of the program. Many students spoke of their perceptions of college, and how the program changed their thoughts for future career aspirations and attending college in the fall.

Julia Rivera, a rising senior at Worcester Technical High School said she was in AP classes and took two Early College classes, a biotechnology class at Quinsigamond Community College and another at Worcester State, which made all the difference in applying for an internship.

“I applied for a paid internship at Dana Faber Cancer Center, which I don’t think would have happened if not for Early College. They [Dana Faber] asked what classes I was taking. I listed bio tech, which I think made me a strong candidate. And, the internship helped me with the bio tech class,” she said.

Fatimah Daffaie, who graduated earlier this month from Doherty High School, wasn’t sure what to think or expect from Early College and the humanities, social sciences classes she took at QCC and WSU, respectively. “I learned a lot of technology like Blackboard and basic online experience,” she said. Daffaie, who took in-person classes before the pandemic, especially liked classes in public speaking, psychology, STEM careers, and public health. “I wasn’t thinking about going into that area, but it helped me, exposed me to speakers in that field, neuroscience and physiology. Mentors in this field and their experience being in college helped me. Next year, I will attend WPI.”

Superintendent of Worcester Public Schools Maureen Binienda said Early College has seen an increase in enrollment and interest from first-generation college students, which also reflects the demographics of the district.

“Since 2018, 1,902 credits have been earned through Early College. Students choose their career pathway, receive counseling, transportation to and from the college site, and 88 percent matriculate to college, including Harvard, Princeton, Wellesley, Worcester State, and QCC,” among others. “It is a seamless transition for our students and I could not be more proud of what they have accomplished.”

Not all students were sold on program at first. Angelina Defeudis was one of them. A North High School student, Defeudis started Early College in 10th grade. Though she did not have plans to go to college, once she enrolled, her plans changed.

New to the country with very limited English skills, Chantale Zuti took Early College classes a way to learn about the United States. “I just graduated from Burncoat High School. I learned English, which is one of my five languages spoken. My first class was computer science class at QCC and the class prepared me so much. I got a scholarship to MIT to take more classes in computer science. I took sociology, English 101, I learned time management, and learned how different high school is from college. Being responsible is one of the advantages. I am attending Wellesley College in the fall.”

“I’m a graduate of the 100 Males and Early College,” said Jefferson Gonzalez, who credits the programs for their hands-on impact, growth, and connection. “It made life easy for high school, and helped me out with money,” since the program is free. A graduate of Worcester Tech, Gonzalez has his sights on engineering and robotics and hopes to gain his Ph.D.

Gov. Baker appreciated the time and commitment from the students of Early College and said he believes it’s needed to support the Commonwealth moving forward. Speaking to the students, Baker said, “I am so proud of you. You may not have had a person to say, ‘Yes, go for it,’ but you made that choice to go forward. We need to be more intentional about having opportunities for all students. We need you. We need your talent and commitment to these careers and in the Commonwealth.”

Rep. Roy, a lead supporter of the Early College bill in the House said, “Hearing the transformation impact on [students’] lives, we have crafted a piece of legislation that we hope we’ll bring on your [Gov. Baker’s] desk. There is no reason we cannot do this type of program in all 352 communities in the state. We have innovation and career pathways. These are the stories we’ve heard when we toured the Commonwealth.”

“The stats, low income and first generation are the students that are talking these classes, and they are succeeding and obtaining the grades. Tell your friends about this program. Worcester State has been a great mentor. This is about getting jobs and preparing students to be successful,” said Luis Pedraja, president of QCC.

The partnership among Worcester State, Quinsigamond Community College, and the Worcester Public School System was one the first early college programs to receive official designation when the program launched in 2018.

Worcester State President Barry Maloney wanted to remind legislators present that these courses weren’t tailored for the high school student. They are college-level and challenging.

“Academic course offerings are high rigor courses. The wrap around services to support students outside of the classroom has been our secret sauce,” he said. “We thank our partners for their support.” 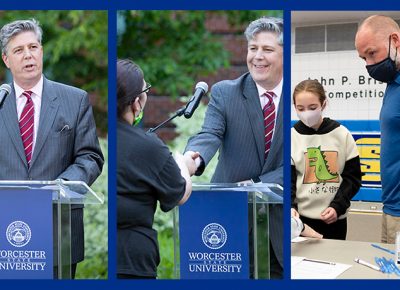 President Barry M. Maloney honored four members of the Worcester State community during a ceremony marking the closing of the large-scale vaccination clinic in the Competition Gym of the Wellness Center on Thursday, June 10. The clinic closed after 18 weeks and more than 83,000 vaccinations due to a decrease in demand and a change in strategy for reaching those who remain . . .