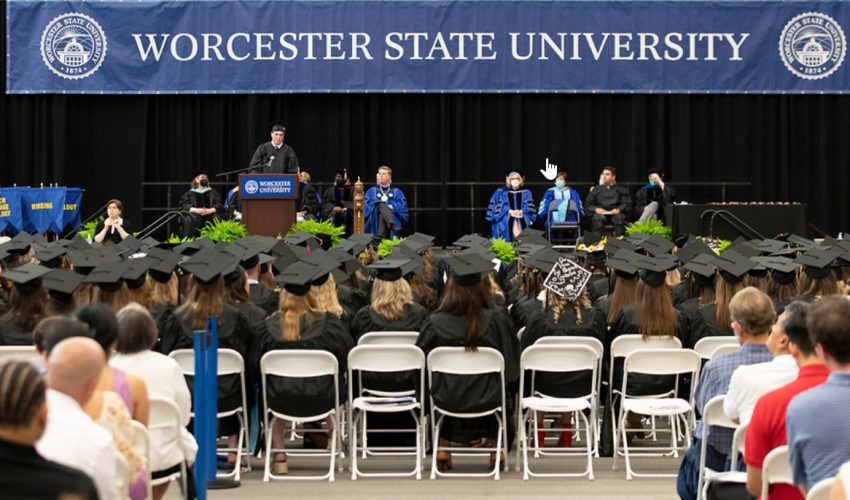 Friends and family filled the seats on either side of the John P. Brissette ’88 Competition Court. In the center of the room, 300 empty white chairs waited for the Worcester State graduate students who would be receiving their graduate degrees that day.

The Worcester State University Graduate Commencement, held on Friday, May 13, was the University’s first in-person commencement ceremony since the start of the pandemic.

At precisely 5:45 p.m., the sound of bagpipes filled the air, and the graduate students started their procession around the upper level of the court. Cheers erupted from the audience. Family members shouted names, waved and blew kisses as their graduate passed. Cameras flashed.

Even after the graduates had taken their seats, the excitement of the audience carried on.

President Barry M. Maloney acknowledged the difficult path the graduates navigated by continuing their studies through uncertain and rapidly changing times. “If you enrolled in 2020, you took a leap of faith,” he said, congratulating them for accomplishing their goals.

He singled out the Nursing School graduates, saying that, in a time when COVID-19 is still affecting the population, “You are poised to impact the community immediately.”

President Maloney also gave all the graduates some advice. “To strive toward perfection can be the very thing that keeps you from it,” he cautioned, urging the graduates to take on challenges and pursuits for the sheer joy of doing them or to better themselves or to help others.

The President’s comments about community and helping others were echoed by Maryanne Hammond, vice chair of the Board of Trustees. “We recognize achievements aren’t accomplished alone,” she said, and encouraged graduates to turn around and thank the friends and family who helped them and who were there to see them graduate.

Resilience was another theme of the night. Lois Wims, provost and vice president of academic affairs, told the graduates that the fact that they completed these degrees during a pandemic was a testament to their resilience. 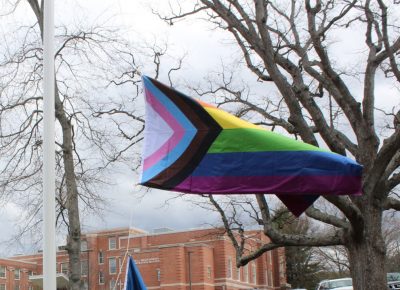 More than 200 Worcester State students, faculty, and staff gathered in front of the Student Center on April 27 to take part in a flag-raising ceremony and inauguration of the new Common Ground, a . . .