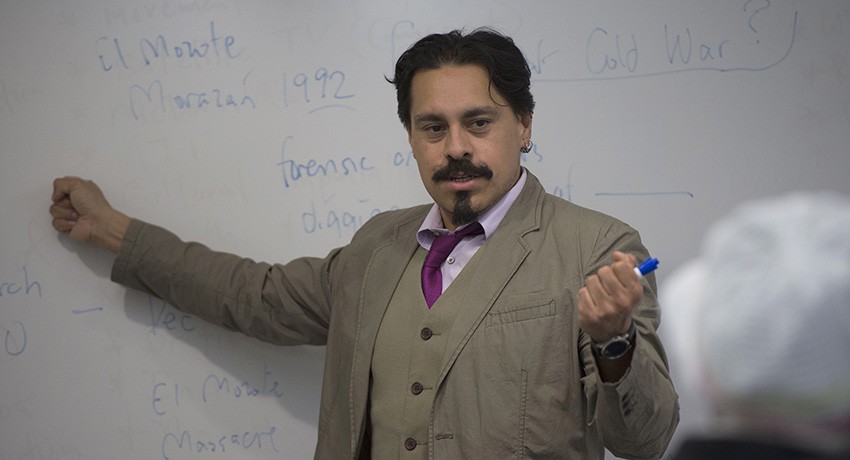 The question that propels Aldo Garcia Guevara’s research about the role of military regimes in El Salvador during 1930-1960 is one that may resonate today in the United States:  How do people come to support political leaders who are not acting in their best interests?

Guevara, who studied the origins of Catholic social thought in Costa Rica and El Salvador for his masters thesis, was intrigued by something he kept encountering.

There was widespread nostalgia among the middle class for the days of the military dictatorship, he said. They told me there was no crime, that they felt safer during those days.

Guevara wondered whether that was, in fact, true and pursued that question at the level of national politics for his dissertation.

The question remained about the incidence of crime at the local level.  A 2007-08 mini-grant, Justice and Social Control in a Military Dictatorship: El Salvador 1930-1960, enabled him to travel to El Salvador to find out.

He used court and police records and newspapers in San Salvador to investigate crime and safety issues in that period.

The more I looked into it, I found that this was less true than people believed, Guevara said.

The military regimes of El Salvador used the language of law and order to turn themselves into dictators, he said. They did this by manipulating the newspapers, using propaganda to sell themselves and their authority to people.

This was a deliberate politics of misinformation, he noted, and it worked better in San Salvador   than in the rural areas outside the capital.

What’s so interesting about El Salvador, he said, was the ability of the government to flat out lie to people without any sense of irony.

As he explored public records and newspaper accounts during the summer of 2007, Guevara discovered something else that seemed counterintuitive.

In 1932, the military killed some 15,000 to 20,000 indigenous peasants, he said. Given this, I thought there would be many more references to race relations in court records, but I found that class was more evident than race in these documents.

He said that historians of Brazil have noted a similar phenomenon.  Race certainly affects judicial decisions, but it rarely appears in court proceedings. Those who control the institutions and record keeping look to deny the impact of race.

Guevara, an assistant professor in his third year at Worcester State, is analyzing data from that summers research. He hopes to submit a manuscript to the Journal of Latin American Studies based on his work. There is probably enough material for a book, he said.

Meanwhile, this research is an exploration, in the broadest sense, of his past.

I was born in El Salvador and still have some family there, he said.  His roots and those of the country are entwined.

The same kinds of problems face women no matter where they are. That’s the conclusion Josna Rege (English) has reached during her studies of the South Asian disapora in Britain. “The . . .