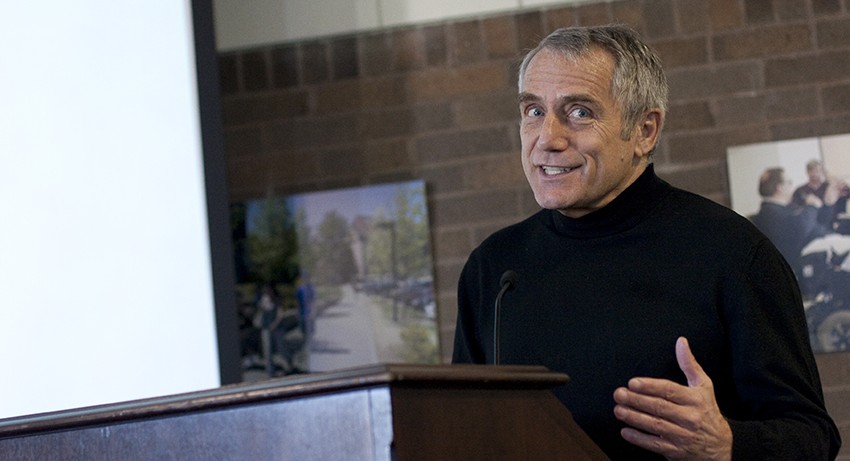 Hamer Speaks About the Gay Gene and Shows Documentary

“I think kids should be accepted for who they are,” said Dr. Dean Hamer, one of America’s leading geneticists and author of The God Gene, when he spoke at Worcester State College last week.  The overflow crowd of students and faculty saw his film, “Out in the Silence,” and listened to his remarks on sexual orientation, which he says, “is not a choice,” according to overwhelming evidence.

Hamer’s story for the audience was a personal one as well as one based in hard science. He told the crowd that after he posted his wedding announcement in his Oil City Pennsylvania hometown newspaper when he married his partner, local readers responded with letters to the editor criticizing him for entering into marriage with a same-sex partner.

In addition, he received a letter from Kathy Spring, mother of a 16-year-old boy, CJ, who was being harassed at his high school in Oil City for his sexual orientation. She wrote the letter to Hamer because “she had nowhere else to turn.” Hamer and his partner went back to Oil City and produced the documentary “Out in the Silence” about CJ, his struggle with the local school committee, and the town’s debate over same-sex couples.

Ultimately, CJ, with the help of an ACLU lawyer, was able to get the school committee to provide diversity training and Hamer forged a friendship with a local pastor who opposes same-sex marriage.

Hamer concluded that students like CJ need as many allies as they can get. “Straight allies in high school really help,” he said.

Hamer rose to prominence for finding the “gay gene,” a discovery that revolutionized understanding of human sexuality and ignited a fierce controversy over gay rights.

The event was sponsored by Student Center/Student Activities, Disability Services.

Worcester State College is proud to be the future home of the Milton Meltzer Collection, as the estate of the late Milton Meltzer, a distinguished author of nearly 100 books for children who was . . .