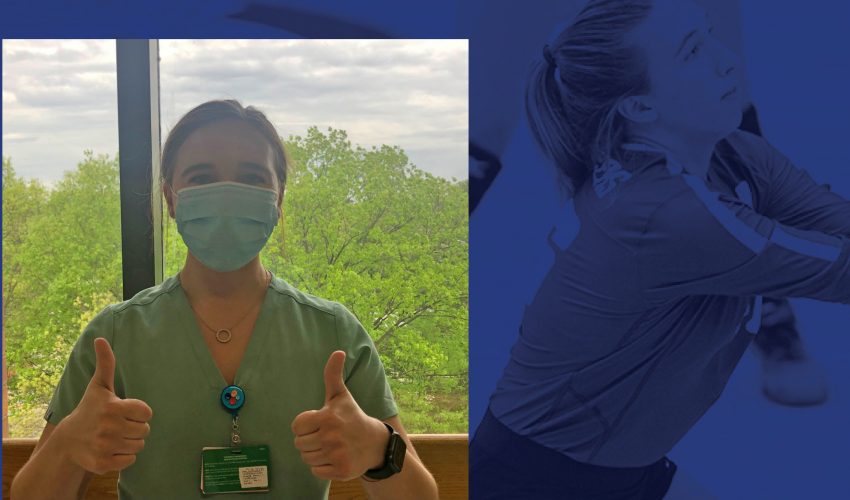 In the first week of June, women’s volleyball libero Brooke Lamothe ’22 would normally be enjoying the first few weeks of summer. She would have just recently returned from campus to her home in Tewksbury, Mass., and would be beginning her summer training regimen in preparation for fall camp in August.

Instead, as a result of the COVID-19 pandemic, Lamothe has now been home for nearly three months, and has been working as a Certified Nursing Assistant (CNA) at Beth Israel Lahey Health in Burlington.

Lamothe works in a per diem position at Lahey, which requires her to work a minimum of 24 hours per month. Currently, however, Lamothe says she is working at least that many hours per week, and sometimes more. Her primary floor is the cardiology and progressive care unit, but often gets floated to other areas of the hospital as necessary.

Lamothe’s job at the hospital requires constant one-on-one contact with patients, and the hospital has seen a significant uptick in the number of patients.

“For a few weeks in mid-March, I was assigned 18 rooms, but only had about seven to nine patients in total, which is unheard of,” Lamothe says. “That was the ‘calm before the storm.’” Now, the hospital is back up to full capacity on the 36-bed floor.

Playing on the women’s volleyball team has helped Lamothe become a stronger team player, a skill that has proven vital working in the hospital.

“In order to be successful in health care, we need to understand it is not just about one person,” she says. “Every part of health care involves some sort of teamwork, from the CNAs to the nurses to the doctors, that keep things moving smoothly. If any part of this chain just decides to not do their job, it is the patients who suffer and that is never okay.”

While Lamothe admits that her current role at the hospital is nerve wracking day-in and day-out, she has no regrets about her situation.

“I wanted to become a nurse to help those in a time of need,” she says. “I love it when I can make someone smile on a day where they did not think they were going to. A time like this helped to solidify my decision to become a nurse because I am surrounded by powerful women and men who are changing lives day-in and day-out, and eventually, I want to be just like them.”

Perhaps nothing solidified Lamothe’s decision more than a moment between a nurse and a patient early in the pandemic, when Lamothe was helping to discharge a patient.

“What should have been a joyful experience proved difficult when we were trying to get the man into his own car. For a few minutes, we believed our hard work getting him back to a good place would come crashing down, quite literally. Thankfully, we managed to get him into his car safely.

“Walking back to the floor, the nurse started crying. She was so worried about her patient, but in the moments before she was strong, never breaking until we were out of sight of her discharged patient. That patient never saw her cry, his last image of her was waving and a smile under a mask. The strength of health care workers is unmatched. I consider them all superheroes.”

Working on the front lines of the pandemic from an early stage, Lamothe has seen and experienced a bevy of different emotions, but has shown resilience in getting through her shifts day after day.

“It is perfectly okay to not be okay with what is going on,” she says. “Just know that you are not alone and you have family and friends who feel the same way you do. Reach out to your loved ones and check in with them.”

“Brooke is an outstanding student-athlete who is a leader on and off the court,” says women’s head volleyball coach Bernie Chase. “Her role as libero/defensive specialist puts her in the middle of every play. She supports her teammates by attempting to get a touch on every ball defensively, and will hit the floor to make a play. I am sure Brooke brings leadership and tenacity to the nursing profession and her patients as well, and I am positive she does it with a smile.”

“On my days off, I make sure they are exactly that—a day off,” Lamothe says when asked about how she deals with the stress of the pandemic. “I try my best not to think about the other shifts ahead and to just live in the moment. Recently, my dad has built a garden in our backyard and helping him with that really helps to get my mind off everything. I also find exercise and Facetiming my friends are great ways to escape and focus on myself instead of worrying about the future.”

Ultimately, the support of her friends and family have been the number one thing that has continued to lift her spirits even on the most exhausting days.

“It is really beautiful to see all the support we are getting from not only each other, but people around the world. It makes it all worth it to know that people appreciate what we are doing.”

This article was originally posted on the Worcester State Athletics website. 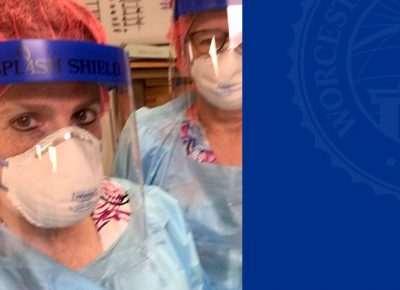 Karen M. Richard, M.S.N. ’18, is registered nurse on the Medical-Surgical Unit (designated COVID-19 unit) for HealthAlliance Hospital in Leominster, where she has worked for almost 10 years. She . . .