Eihab Jaber spent his summer refurbishing 18 computers that AstraZeneca donated to the chemistry department. These computers, plus two servers that IBM donated, have enabled the department to have a high performance computing cluster, known as a HPCC.

Jaber is an assistant professor in the chemistry department. Computational chemistry is his specialty.  A 2008-09 mini-grant from the college supported his work on these computers this summer.

“I worked with Jason Kost, a brilliant student, to get these computers up and running,” Jaber said. “He’s been an undergraduate researcher for me for a couple years. I’m very fortunate to have him work with me.”

The two placed the computers in a chemical hood in a lab, the only available space for them. They couldn’t move the hood, so they adapted it to their needs.

Turns out, this was a smart move.

Its a good place to store the computers because they give off heat, Jaber said. The Information Technology department helped get the $11,000 worth of donated equipment to function in the lab.

“Nancy Ramsdell and the whole IT department were extremely helpful,” Jaber said. The computers form a Beowulf cluster, which means that all of them work together in parallel to solve a computational problem.

The kinds of problems the cluster works on fall into three categories at the moment: nanotechnology, material science and green chemistry. Students will continue their work under Jaber’s direction to develop nanoparticles for cancer research. Others will work on the development of smart, field-responsive polymers. Still other students will work on the prevention of ozone destruction by researching the effects of hydroxyl radicals on ozone.

In addition, Jaber envisions using the cluster in his work with Upward Bound students. He’s a science instructor for the program, and he tries to interest these high school students in science careers as he works with them throughout the school year.

They’ll present their work at a mini-conference in the spring for their teachers and parents, he said. The new computational computer cluster will be getting quite a workout. 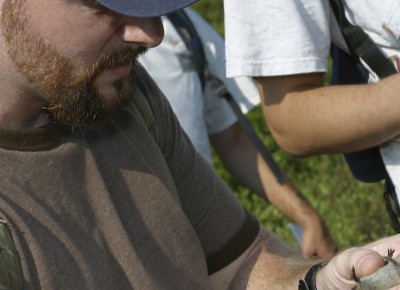 You may be familiar with the myth of lemming mass suicide. In fact, you may have even used the lemming metaphor to describe those who blindly follow their leaders to their deaths. Randall . . .