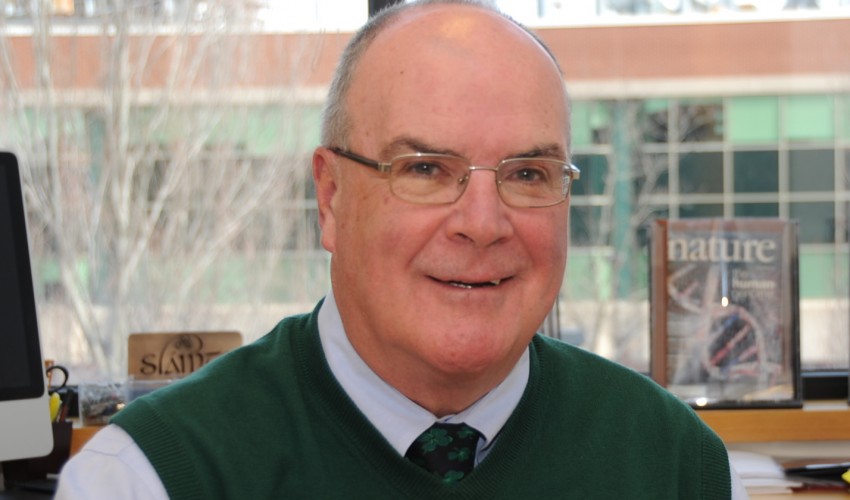 Worcester State University will celebrate its more than 1000 graduating seniors on Saturday, May 17, 2014, at 10 a.m. at the DCU Center in Worcester, where they will hear from groundbreaking HIV researcher, John L. Sullivan, M.D.

Dr. Sullivan conducted some of the earliest research on the virus, which has led to medication that allows patients to live with HIV/AIDS. He retired in 2012 from the University of Massachusetts Medical School in Worcester, after serving for decades as a faculty member and administrator. Upon his retirement, Provost Terrence R. Flotte, MD, said, “That the current generation of medical students and physicians are able to see HIV/AIDS as a treatable, chronic disease is due in part to the work of John Sullivan.” More biographical information on Dr. Sullivan can be found below.

In addition to the conferral of degrees, two will receive honorary doctorates, and two faculty, one community member and several students will be recognized for their accomplishments, as follows:

2014 Honorary Doctorates have been approved by Worcester State University’s Board of Trustees for:

Commencement Speaker John L. Sullivan, M.D., will receive a Doctor of Science, honoris causa. He is a groundbreaking HIV researcher, whose long career at the University of Massachusetts Medical School began in 1978, when he joined the Pediatrics Department. He has held numerous faculty and administrative posts since then, and retired in 2012. He led a team that successfully competed for a five-year, $20 million grant from the National Institutes of Health, awarded in 2010, that established a Center for Clinical and Translational Science at UMMS.  Among the Center’s goals is to help accelerate the process of turning laboratory discoveries into treatments for patients.

Dr. Sullivan has served as Vice Chancellor for Research, Director of UMass Center for Clinical and Translational Science, Vice Provost for Research and as senior scientific advisor for the Program in Molecular Medicine. He earned his B.S. in biology from LeMoyne College and his M.D. from SUNY Upstate Medical School, Syracuse, in 1972. His appointments include an “Established Investigatorship” from the American Heart Association and a Charter Membership in the AIDS and Related Research Study Section of the NIH.  He is a member of the Board of Trustees of Becker College and Vice Chair of the Board of the Worcester Center for the Performing Arts.

Rep. John J. Binienda, Sr., WSU ’70 will receive a Doctor of Public Administration, honoris causa. Representative Binienda served the 17th Worcester legislative district for 28 years, opting not to run for reelection this year, and taught for 17 years in the Leicester public school system.

In addition, two other Honorary Doctorates will be presented at ceremonies this spring:

James T. Brett, President and CEO of the New England Council, and former state Representative from the city of Boston, who will receive a Doctor of Humane Letters, honoris causa, at WSU’s Graduate Commencement May 16; and

Robert Emmett Mullin, WSU ’53, M.Ed. ’56, Ed.D (Columbia University), a longtime Professor in New York at Queens College, Mullin’s love of his alma mater, Worcester State, has led to a lifetime of giving back. He has served as mentor and benefactor for many Worcester State students, endowing three scholarships and contributing to university life in many ways. A Doctor of Humane Letters, honoris causa, will be conferred upon him at WSU’s May 1 Academic Achievement Award Ceremony.

The Community Service Award recipient is:

Thea Aschkenase, a 2007 Urban Studies graduate of Worcester State University, who is also a Holocaust survivor. The 90-year-old Aschkenase is an anti-hunger activist who regularly speaks about hunger and the Holocaust in Worcester schools and volunteers on behalf of people with disabilities and those in need.

The 2014 George I. Alden Excellence in Teaching Award recipients are:

Stacey L. Parker, M.F.A. of the Department of Visual and Performing Arts; and

Karl R. Wurst, Ph.D. of the Department of Computer Science.

The Ella May Whitney student award – the university’s highest student honor – will be announced during the ceremony, and all finalists for the award will be recognized.

For more information and details about commencement day, visit www.worcester.edu/commencement.

The Massachusetts Board of Higher Education today approved a new degree in mathematics for elementary education that Worcester State University will offer beginning in the fall of 2014. The new . . .